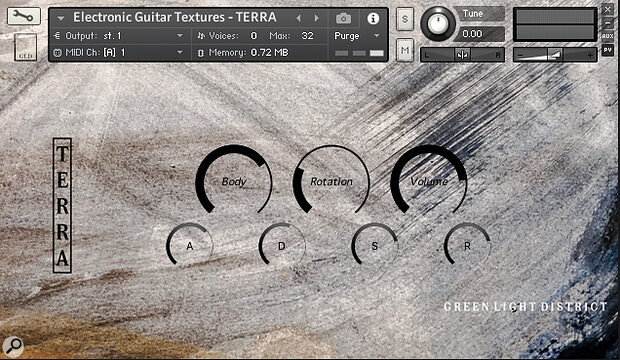 Green Light District are probably best described as a collective of composers, orchestrators and sound designers, with an established track record in scoring media projects of all sizes. This might also inform the cinematic tendencies of their latest sample library releases, Electronic Textures Volumes 1 & 2.

Each volume is relatively distinct, at least in terms of the initial sampling point. Beyond that, the boundaries go delightfully fuzzy, with each volume presenting Kontakt‑orientated instruments, boasting different colours.

Volume 1 begins with instruments relating to guitar, or to be more exact, bowed guitars. While there are four Kontakt instrument patches, each with a distinct tonal identity, the interface in each case is identical. Seven pots allow for subtle and basic control of your sound. Four of these pots relate to an ADSR envelope, with a fifth controlling overall volume. This leaves two further pots, the first of which is labelled Body. This adds weight and depth as it is opened, in much the same way that a low‑pass filter might, but due to the meandering and evolving nature of each sound, the Body control often reveals elements that unravel with time. It acts much like a timbral dynamics control, so possibly no coincidence that it defaults to the Mod wheel, for easy real‑time deployment. The final pot is labelled Rotation, and plays with the stereo image via an auto‑pan effect.

The four instruments within Volume 1 are named Terra, Abyss, Lunar and Umbra. Terra has plenty of content which undulates, providing immediate and consistent interest, while by comparison, Abyss exudes a degree of guitar overdrive, which is more sustained and continual, providing a decent contrast.

The next compendium offers a similar construct, but with seemingly greater complexity, drawn from the backbone of a piano. The seven pots remain, in line with the GUI from Volume 1, but alongside the ADSR pots, the main three character‑altering pots in Volume 2 change from one Kontakt instrument to the next.

In the case of the first instrument, entitled Range, the pots align as Body, Bite and Movement. While the basic premise centres around a bowed piano, additional colours may be added. The Movement pot, for example, adds octave leaps which strike strings conventionally, but in a seemingly riff‑orientated manner. The Body component filters in a similar way to the guitar content of Volume 1, but the Bite pot emits plenty of high‑end bowed colour, which complements it beautifully. The Horizon patch in this volume engages some beautiful colours, and I found myself controlling each element in real time, rising to a musical crescendo to great effect.

Placing either of these two volumes against a backdrop of acoustic scoring will immediately add other‑worldly interest and colour to any score or production. Moreover, it’ll do so with comparative ease, although these are relatively small libraries, which will have limited capacity. Arguably, they are quite the bargain!