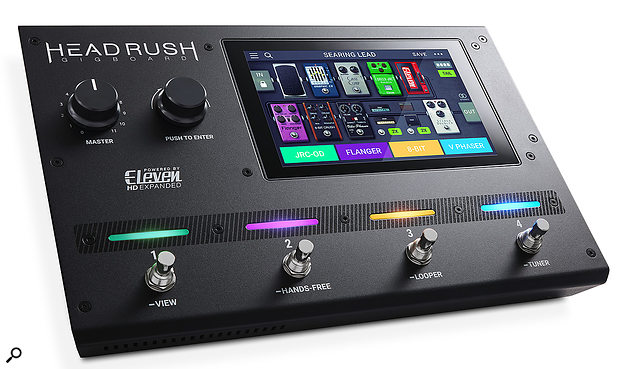 The Gigboard crams the processing power of Headrush's flagship Pedalboard into a compact and easy to use format.

Many of the several companies currently vying for the 'ultimate guitar floor processor' also offer slimmmed-down versions of their flagship products, which aim to deliver the same quality in a more affordable, convenient form factor for those who don't need access to every feature. The Headrush Gigboard is one such product, and is based on the larger Headrush Pedalboard (reviewed in SOS September 2017).

The Gigboard has one of the most intuitive interfaces I've yet encountered, courtesy of its seven-inch colour touchscreen. The screen supports all the usual double-tap, drag and swipe functions we've come to expect from tablets, to the extent that I could spend a few hours exploring the unit with the supplied quick start manual still sealed in its bag! A full manual, available online, will help you understand the full power of this device, though. It reveals various features that are less obvious, including that the more vain performers out there can even load in their own band logo to display when the screen is locked!

Inside the tough steel enclosure, a quad-core processor hosts amp models powered by Eleven HD Expanded DSP code. Power comes from an external adaptor — I'm not keen on those, but that seems to be the way of things today. Eleven was one of the first serious amp modellers for Pro Tools some years back, but the development team have not been idle. The OS permits gapless preset changes, with reverb and optional delay tail spillover (unless in Looper or USB audio mode). The built-in looper offers up to 20 minutes of record time. As with much of the competition, it's possible to load custom speaker cabinet impulse responses (IRs). There's a download link to some of Celestion's excellent IRs to get you started, but WAV or AIFF format IRs are supported at up to 192kHz sample rates and 32-bit word lengths.

Part of the Gigboard's simplicity of operation comes down its feature set, which focuses on the things most guitarists use most of the time but leaves out some of the more obscure trick effects. By default, the effects and amps are arranged in series, but it's easy to split the signal path to create parallel routes with different effects in each. Two split-and-combine (stereo) settings are available for this purpose. If you only need mono, the stereo width can be turned down to zero at the output.

As so much can be done via the touchscreen, the front panel's four footswitches are accompanied by only two knobs, one a master volume and the other a data dial with a push-to-enter switch built in. The footswitches can be used to turn on or off the assigned model or scene, or to load the assigned Rig, where a Rig is essentially a patch comprising amp models, speaker models, effects, their routing and their settings. The switches also access the tuner and looper. Each Rig can access up to 11 slots (amp/speaker combination models count as two slots). Occupied slots have graphical representations of pedals, amps or speaker cabinets in them, and icons are dimmed when bypassed. Empty slots have a plus symbol inside.

Multi-colour LED bars above the footswitches aid navigation when playing live, and the user can choose which colour is assigned to which function. There's also a hands-free editing mode that uses the footswitches to make minor tweaks. Knowing that bands don't always play the same songs in the same order, there's also the provision to use drag-and-drop to create custom set lists, so that the amp Rigs are in the correct order for use.

If you wish to use it only for the effects, there's provision to hook the Gigboard up to a real guitar amp.

In addition to the guitar input jack stereo (TRS balanced/unbalanced) and headphone outputs, the Gigboard can connect to an amp's effects loop via the rear-panel send and return jacks, which may alternatively be used to incorporate outboard pedals. A switched (short-to-ground) feed allows switching of the channels or reverb on an external guitar amp, if using the Gigboard purely for its effects. There's also provision to add an expression pedal with a separate toe-switch via a pair of quarter-inch jacks. Other features include a stereo aux in mini jack, a USB port, a MIDI in port and a MIDI out/thru. Global settings allow the relevant connection to be set to guitar or line level, so the Gigboard can also be used for re‑amping.

The footswitches operate in one of four view modes: Stomp, Rig, Hybrid or Setlist. In Stomp view, the four switches turn four effect/amp models on or off, while in Rig view they navigate banks and patches with two patches (Rigs) per bank. Setlist view navigates through your setlist just as the name suggests — but what is Hybrid view all about? Actually it's quite handy. The first two switches are used to turn on or off selected models in the current Rig, and it uses the other two to step up or down through your list of Rigs. MIDI Program Changes may also be used to select Rigs.

Double tapping a model's icon opens it up for parameter editing, and the number of parameters is generally fairly small — more like a pedal than a rack effect. Touching an icon's footswitch bypasses it. Speaker cabinets can have different mic setups, on or off axis. The effects are arranged into seven categories with several different models in each; and those with tempo-related functions can either be loaded with their stored tempo or controlled using a footswitch (for tap tempo). As you'd expect, you get a very wide range of classic amplifiers and speaker cabs, mainly from the UK and USA, plus an assortment of overdrive, distortion and fuzz effects, modulation (including some excellent rotary speakers alongside the more usual tremolos, phasers, chorus and flange effects), compressors, EQ, noise gate, various reverbs and delays. There's also a sub‑octave effect that I found to be far too lumpy sounding to consider using. There are no fancy reverse, slow-attack, shimmer verb, etherial weirdness models but then few of those things get much use outside the studio anyway. 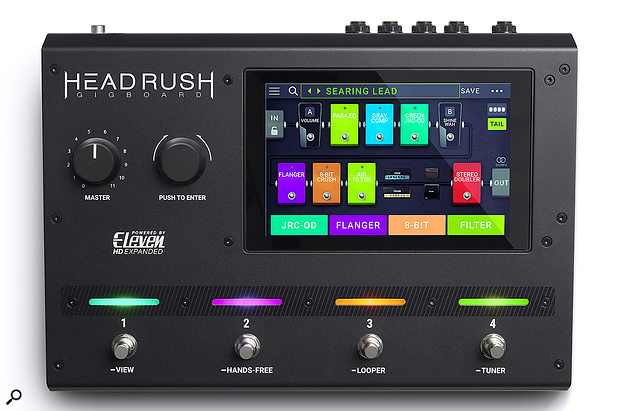 When I first went through the factory presets, I was a little bit uncertain what this unit was really capable of — the clean sounds were decent enough and so too were the high-gain heavy rock sounds, but many of the presets sounded over processed to my ears. I also found, when switching between some amp models while editing, that the large level disparities could be a little off-putting.

But that was just the presets — and, happily, setting up a couple of basic amps plus a more realistic chain of effects from scratch showed that the Gigboard is actually a seriously capable processor. The amp sounds that can be achieved are very believable, even those just pushed into the lower reaches of drive, and combined with the effects on offer here they would certainly see a covers band through an evening of pop/rock variety with no trouble. I particularly liked the Vox-inspired amp models, which capture the characteristic high-end jangle of a Vox amp on the edge of break-up rather well — and the other UK-centric sounds were pretty impressive too. Other than the grumbly sub-octave effects, all the effects models behaved well.

As mentioned earlier, this is just about the most guitarist-friendly unit of its type that I have used to date, and whenever I tried to do something on the touchscreen, it just seemed to work as I expected. Drag a model to a new location to move it, move it to the bottom edge of the screen to remove it, double‑tap it to open the controls, and so on.

Ease of use is massively important for a product of this type — almost as much as the sound itself. So it's great that the Gigboard's touch-screen is so effective that you just don't need a separate software editor. Happily, it sounds good too! So if you like a simple life and don't stray too far from the usual raft of guitar effects, I'm pretty sure you're going to like the Headrush Gigboard — whether you use it as a full rig replacement, or just your pedalboard setup.

If you don't need the amp modelling, then the Line 6 HX Effects is a good choice, as are the HX Stomp and Helix LT. As yet there's no cut-down version of the Boss GT‑1000, but given everybody else seems to be doing one, it seems reasonable to suppose they may follow suit.

This very practical and friendly amp and pedalboard replacement sounds good, is easy to use and can be yours for an affordable price.