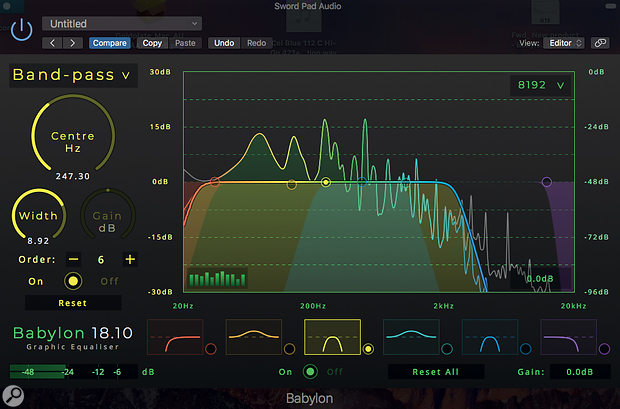 Billed as a comprehensive graphic equaliser and available for the cost of a few beers, Gramotech's Babylon might better be described as a very flexible multiband EQ, as it has little in common with conventional graphic equalisers — though it is an equaliser with impressive graphics! Its designer, James Johnson, remembers being unable to afford the software he wanted when at university, so his stated aim now is to develop quality plug-ins that students and home‑studio owners can afford. Babylon is the company's first product, though their road map aims for a new plug-in release every six months or so.

Supporting Windows and Mac OS and supplied in VST, VST3 and AU formats (but not AAX), Babylon has six EQ bands, each offering a choice of eight different filter types. All the filter parameters can be automated, and a spectrum analyser helps you to visualise the effects of your settings. The analyser can be switched between a multi-coloured line graph showing the averaged frequency content across the bands, or a bar-graph mode, each bar covering a narrow band of frequencies. The original input signal spectrum is shown more faintly in grey behind that of the equalised signal, so that you can see what effect the EQ is having. Each filter has an on/off switch, and any parameters not relevant to a particular filter type are dimmed out.

The filter types include the familiar parametric EQ, low- and high-pass filters and low and high shelving bands. More unusual is band-stop, or notch filtering, which attenuates very deeply at the set frequency, and band-pass. This attenuates frequencies at either side of the centre frequency using a more-or-less fixed slope rather than a bell shape, making it particularly good for 'bracketing' sounds to narrow the area of spectrum they occupy.

Less common still is the all-pass filter mode. Here, all frequencies pass unaltered in level, but their phase is progressively shifted as frequency falls towards and below the corner frequency. The effect is audible mainly on low-frequency sounds that also contain a fair proportion of harmonics, as the all-pass filter changes the phase relationships of harmonics within a sound without changing their relative levels. Depending on the source, the effect can be very subtle, but it is a worthwhile inclusion that you don't find on many other equalisers. It is also possible to create some phasey special effects by doubling a track, applying all-pass filtering to the copy, and automating the corner frequency.

In practice the EQ works very smoothly, even when automated, and the ability to set any band to any filter type really does make Babylon very flexible. I found that automating a fairly wide band-pass filter was a good way of adding a changing character to a chillout rhythm track, but it can handle all the conventional EQ jobs in a very capable manner too, with the spectrum analyser being very helpful in setting up EQ curves. I am impressed that Gramotech Audio are selling this plug-in so cheaply, when you can easily pay five times as much for something far less sophisticated! If you're stuck even for the small price of admission, a time-unlimited free trial version is available, though this lacks some of the features of the full version.