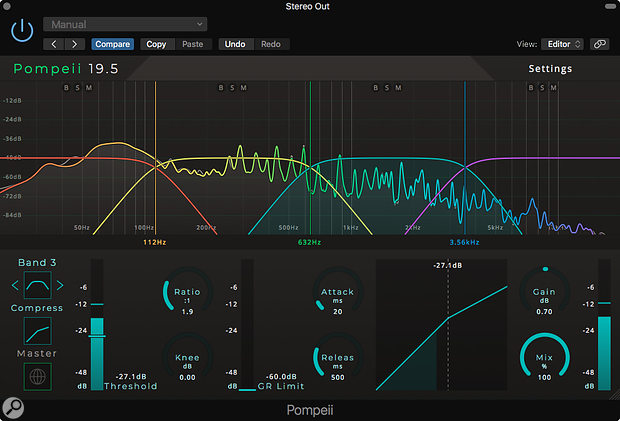 Conventional compressors or expanders are not always suitable for tackling issues that affect predominantly only one part of the frequency spectrum, which is where multiband solutions can come in very useful. In essence, the incoming audio is split into several frequency bands and a separate compressor or expander is used to process each band before their outputs are recombined. Gramotech's Pompeii comes at a price that won't burn your fingers and it is very straightforward to use, with global switching between compressor and expander modes. It supports AU or VST3 Mac/Windows plug-in platforms and requires no hardware for authorisation.

There are four user-configurable bands (low-pass, two bell sections, and high-pass) each shown in a different colour on the fashionably dark GUI. When a band is selected using the band button or by clicking on it directly, the controls below switch to that colour indicating that they now apply to that band only. Additionally, Pompeii features a master full-band processor which is applied to the overall output. A spectrum display shows the output spectrum as a line that changes colour from left to right, but a second grey 'input' display line is revealed when processing is taking place to show the level difference between the input and processed sound.

Setting up is done by selecting the band of interest, adjusting the ratio and threshold controls and then, if necessary, adjusting the overall band level. THe ratio controls allow bands to be used as expanders instead of compressors, which can be useful in the high band to help clean up HF noise or to help increase the dynamic range of some sounds. It's also possible to adjust the knee shape, attack and release values per band. The crossover frequencies can be adjusted just by dragging them. Individual bands can be bypassed or soloed while the Master band selector button hands over control to the master full-band processor, offering the same controls but with the crossover bands taken off the display. There's also a master wet/dry control for setting up parallel processing, so all the essentials are covered.

Gramotech's Pompeii comes at a price that won't burn your fingers and it is very straightforward to use.

Input and output meters show both RMS and peak signal levels for the selected band and there's also gain-reduction metering with the option to set a maximum amount of gain reduction per band. Further visual feedback is provided by the input/output transfer function X-Y display in the lower right of the GUI. In fact the only missed GUI trick is that band levels can't be changed by dragging the band display up or down — you have to use the control knob below, and the band crossover displays don't reflect any gain changes.

Pompeii works smoothly and effectively, and its clean, non-intimidating GUI makes it very clear what is going on. It is by no means the only multiband processor of its type and adding Mid-Sides support or some adjustable saturation to each band would have made it even more versatile, but if your DAW doesn't already have a multiband dynamics plug-in, it is definitely worth adding Pompeii to your plug-in folder. At the time of writing it was discounted to half price in a sale, but even at the full asking price it represents decent value.