This clever design rethinks many aspects of compressors that we've long taken for granted.

Arguably, the last ground-breaking development in analogue dynamics processor design was the employment of silicone transistor VCAs as the gain-reduction element — that was half a century ago. We've seen technical specs improve, and facilities such as side-chain filters and wet/dry mix controls become commonplace, but at heart most 'new' dynamics processors reinterpret existing concepts. If anyone were to find a way of doing things differently, it would be Jakob Erland, the man behind the Danish high-end hardware brand Gyraf. He has consistently applied radical, outside-the-box thinking to deliver a truly special range of analogue hardware, and in the gloriously titled Gyratec XXIV Passive Aggressive Cadmium Compressor ('G24' for short), he's created something genuinely new — I believe this design has pushed the envelope further than any other modern dynamics processor.

Erland's primary design aim was to create a dynamics processor as transparent-sounding as Gyraf's latest EQs. This line of thinking first spawned the G21 Magneto-Dynamic Infundibulum (if you read my SOS September 2013 review of this, you'll know just how much respect I have for Gyraf) and although still based on common topologies, the G21's entire design concept was genuinely forward-looking; it's not a 'compressor' in the common sense of the word, but it achieves a certain amount of peak control through saturation of its audio transformers and was an important milestone en route to the G24. A secondary aim for the G24 was to create a cadmium-based optical compressor that would not fall foul of the new EU rules prohibiting hazardous substances (hence 'Passive Aggressive').

The G24 is an optical compressor with a unique side-chain section, and it's unusual in that it boasts a choice of two audio paths which you can select with the flick of a switch. One path is entirely passive, and the other active. The latter employs a very transparent-sounding transistor-based buffer amplifier in the output stage.

Gyraf conceived this 2U rackmountable processor primarily for use in bus processing and mastering, hence both the focus on sonic transparency and the control layout. The controls you'd expect to find on a typical compressor are all present (Threshold, Ratio, Attack, Release and Output) and as it's a true stereo processor there aren't separate controls for each channel; instead, the G24 employs carefully matched (<0.2dB) dual potentiometers, with detents for easy recall. Unusually, though, there are two separate controls for each parameter, the reason being the G24's two different side-chains, which can be selected individually or blended together using the A/B Control potentiometer. The effect is not unlike having access to two completely different compressors — one could use this feature to quickly jump back and forth between two different compression settings, for example, with one in the hard left position and the other in the hard right. But, of course, the mix of the two side-chains could be anywhere between these extremes. 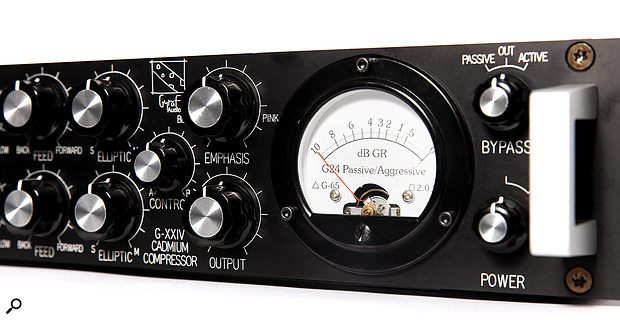 The bypass switch also toggles the G24 between an active output stage and an entirely passive signal path.

Many engineers familiar with the more delicate dynamic control tasks required during audio mastering employ a technique where no single compressor is asked to shoulder the whole burden of gain reduction, instead sharing the load between two or more processors. With the G24, this principle can be achieved with more transparency, because only the side-chain is doubled — not the actual audio path, with its inherent colorations. Another consideration is which of the two compressors should come first. This is a very important question, because often a faster peak limiting compressor is combined with a slower, more gentle leveller, and the order in which the program is processed through these units plays a significant role for the outcome. This is why each of the G24's side-chain sections has its own continuously variable blend control to move between feedback and feedforward modes — these blend controls not only define the compression character of the A and B sections, but also the order in which the program is affected by both side-chains.

Although it's this novel feature which most defines the flexibility and complexity of the G24, there is even more to delve into. Due to the technical layout of the G24 (more on that later when I discuss the signal path and the components), the unit is set up permanently as a Mid-Sides compressor. Both the A and B section offer their own Elliptic control which continuously defines whether the gain reduction is applied more to the M or to the S component of the program. In the centre position (12 o'clock) the M and S portions are compressed with an equal amount, resulting in typical L/R compression. The takeaway of this layout is that the G24 always works with 'ganged' L and R channels — it does not offer independent gain control of the left and right channels.

The output section of the compressor comprises an Emphasis control or side-chain filter, affecting both A and B side-chains with the same amount. This is not a conventional low cut, but rather a tilt filter, which makes the side-chain more sensitive to high-frequency content when turned towards 'Pink', and more low-frequency sensitive when turned 'Blue'. It was borrowed from Gyraf's G23, and at its most extreme settings it adds and subtracts a maximum of about 1dB per octave across the spectrum.

There's also is a large and beautiful backlit VU meter to display the gain reduction, a rotary power switch and the rotary bypass control, which also switches the unit on in both passive and active modes. And with that, we've arrived at the guts of the G24, which are, next to its genesis and its unusually flexible controls, the third aspect of the G24 that is responsible for making it a truly special bit of kit.

Ample controls, twice over: the G24 offers two fully featured side-chains, which can be blended at the user's discretion.

With the goal of ultimate transparency in mind, the G24 offers a very short and simple signal path. In fact, it is to my knowledge the only passive compressor currently available, and as such it arguably has the shortest audio path of any dynamics processor in the market. In passive mode, the signal runs through not more than one resistor, one audio transformer, the gain-reduction element (based on a number of opto couplers) and the output potentiometer. It doesn't get any simpler than that.

The catch is that the input and output impedances of the next units in the chain must precisely meet the optimal requirements of the G24. For situations where this is not possible, for peace of mind, or for easier setup, Gyraf have added the active mode, with a transistor-based buffer amplifier at the output that's capable of driving even the most difficult of loads. This in turn means that in passive mode the transformer doubles, so to speak, both as input and output transformer, in a similar way to the G21 — except that gain reduction/saturation in the G21 is achieved through overloading and magnetically collapsing the transformer core, and the G24 uses a more conventional compressor layout with a resistor across its input. Gyraf employ a Lundahl LL5402 transformer here, which, according to Jakob Erland, "sits in completely the right spot between being clean while still sounding exciting".

It is to my knowledge the only passive compressor currently available, and as such it arguably has the shortest audio path of any dynamics processor in the market.

Two other aspects are defined by the passive nature of the G24. It actually uses a number of photoresistors wired in parallel to achieve low impedances. And although it offers M-S compression, there's no M-S matrix for the audio path — as I said earlier, only the gain reduction works in the M-S domain. And why this is and how it works can't be better explained than by Jakob Erland's words: "We wanted to do a compressor all-passive, while at the same time keeping the unit floating transformer-balanced. But then we can't just shunt signal-to-ground to attenuate (the way all other optical compressors work), because then we would be referring to ground, and not be floating. Usually, you'd use the active parts of a compressor to solve this float-interfacing problem. What we do is not shunt to ground, but between channels: L+ to R+ and R-, L- to R- and R+. When we do this, we not only keep signal isolated off the ground completely — but as a side-effect we get access to controlling M and S attenuation individually, as shunting between same-phase affects the Sides and between opposite-phase affects Mid component."