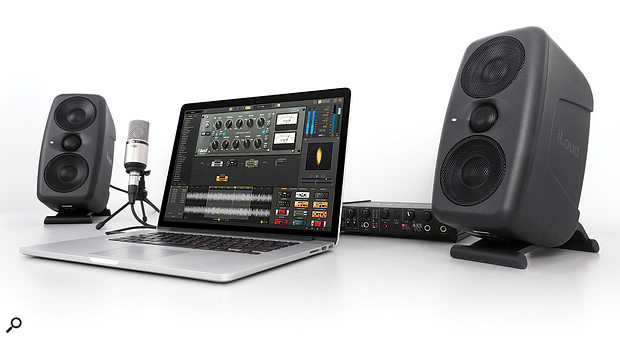 Though compact and affordable, IK's newest monitors manage to cram in a remarkable amount of tech — and the results speak for themselves.

Our esteemed editor reviewed the IK Multimedia iLoud Micro back in SOS November 2016 and, given that monitor's minuscule dimensions, Paul was extremely impressed. So, when the new iLoud MTM was announced I was intrigued. My intrigue, however, was not based entirely on the iLoud track record, it was also spiked by the MTM's D'Appolito configuration (more below) and by the fact that IK's acoustic room correction system (ARC) is integrated into the monitor's electronics. As far as I can recall, the iLoud MTM's built-in room correction is a first for an entry-level nearfield monitor. So there's a fair bit to consider with the iLoud MTM, but to kick things off I'll begin with a description.

Firstly, the iLoud MTM is a decidedly small monitor and is equally suitable for either desktop or more conventional nearfield monitor installation — either side of a DAW screen on wall brackets, for example. In order to help with desk mounting, the monitors are supplied with adjustable stands that attach to the bottom of the enclosures and enable the upward angle to be adjusted from horizontal to +20 degrees. The stand also provides a degree of mechanical decoupling, which will likely be beneficial when desk mounting is employed. In addition to the stand, the iLoud MTM monitors are also supplied with profiled 'rubber' pads that enable them to be used in landscape mode. I suspect, however, that landscape mode will be the exception rather than the norm — particularly as the acoustic dispersion characteristics that result from the monitors' D'Appolito format will likely be most beneficial in portrait mode.

Being so compact, it's perhaps no surprise that the iLoud MTM enclosure is constructed entirely from injection–moulded plastic. It feels reasonably rigid and non-resonant, however, and, in contrast to some of the distressingly heavy monitors that have recently passed though my studio room, the iLoud MTMs are refreshingly light at just 2.5kg each. The plastic enclosures (and, for that matter, the stands) are finished in a dark grey textured paint. Oh for a bit of colour in my monitor-dominated world!

Around the front, the iLoud MTM sports three drivers: twin bass/mid drivers and one tweeter, hidden behind black perforated metal grilles. IK Multimedia give little away on the specifics of the driver technology employed in the MTM monitors other than that the 3.5–inch (90mm in real money) bass/mid drivers incorporate a polypropylene cone and that the 1–inch (25mm) 'silk' dome tweeter has a back chamber. A back chamber on a tweeter is often a good thing as it acts to lower the driver's fundamental resonance, which in turn can make a low crossover frequency more viable. The only further front panel features of note are some modest waveguide–style profiling around the tweeter, and a multi-colour LED that displays in different colours to indicate various operational and setup modes. 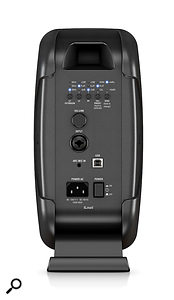 The back panel is where you'll find the input socket, the volume knob, the switches for the various EQ settings, and the mini-jack input for the ARC measurement microphone.The back panel of the iLoud MTM plays host to the expected mains input and signal sockets (analogue only on XLR/balanced jack 'combi' socket), a variable gain control that I left at maximum, and a bunch of push switches used to select EQ and input sensitivity options, and to engage the ARC room–correction mode. A USB port is present for applying firmware updates, and there's also a mini-jack input for the ARC mic and, finally, a reflex port. Flaring on the reflex port exit is not hugely generous, but, again, the compact dimensions of the MTM make that a bit tricky — there simply isn't the requisite back panel real estate. And while I'm on the subject of ports, considering the iLoud MTM's compact dimensions and competitive price, IK Multimedia would have had few options but to go with port loading. Closed–box loading would have required much more heavily engineered bass/mid drivers and significantly more amplifier power. Speaking of amplifier power, the iLoud MTM's bass/mid amp is rated at 70 Watts and its tweeter amp at 30 Watts.

Before I flesh out the iLoud MTM EQ options there's one more feature of its internal electronics that justifies a mention, and that is that the internal signal processing is entirely digital (at 48kHz, 32 bit). This means that there's an A–D conversion on the signal input and subsequently a D–A conversion before the amplification stages. It also means that the iLoud MTM designers had the opportunity to introduce crossover filter profiles that optimise the benefits of the D'Appolito format, and to correct for overall system phase response. Both of which they did. The only downside of such DSP adventures is that they introduce around 3ms of overall latency, which you may or may not feel is significant.

Back to those EQ options. There's an LF extension switch offering 40, 50 and 60 Hz at -3dB (for such a small monitor -3dB at 40Hz is a pretty spectacular claim), an LF shelf offering +2dB, 0dB and -3dB from 100Hz down, an HF shelf offering ±2dB from 8kHz up, and a desk EQ profile that applies a 4dB dip around 160Hz and a 1.8dB boost around 1.8kHz. The EQ options are clearly useful but they immediately raise a question over their interaction with the onboard acoustic room correction. For example, if the desk EQ option is engaged when the ARC calibration process is carried out, does the ARC overwrite the EQ? I'll answer that shortly; you may remember I'm still on a promise to discuss the iLoud MTM's D'Appolito format, and why it's particularly suited to a monitor that might end up on a desk...

There's no magic in the D'Appolito idea, and it's not rocket science either. The two bass/mid drivers in a D'Appolito–format monitor work in parallel until at some point they hand over to the tweeter. As frequency rises in the band where the two bass/mid drivers work together, the wavelength will become similar to, and then less than, the distance between them. The result is that away from the directly forward axis, differences in path lengths between the two drivers and the listener's ears (or a measuring microphone) will result in destructive interference and, effectively, a narrowing of vertical dispersion (line–source PA systems control vertical dispersion in much the same way). Narrow vertical dispersion, as I've mused on before, seems quite a useful characteristic for nearfield monitors because it will suppress floor and ceiling reflections, but it's potentially even more useful for a small desk–mounted monitor because it will tend to take the desk surface reflection out of play. It seems to me that employing the D'Appolito format on a desktop monitor is a smart idea.

Finally we get to the truly unusual aspect of the iLoud MTM: its integration of IK Multimedia's ARC room–correction system. The basic principle upon which ARC works is to make a frequency response measurement of the monitor working at its installed position in the listening room, and then to generate a correction EQ curve that flattens the frequency response. Effectively, the output of the monitor is pre-shaped such that the time–averaged response (ie. the response including the delayed room effects) at the monitoring position is flat. It's far easier said than done of course, and raises some psycho-acoustic questions, but ARC (and products such as Sonarworks and the much more ambitious Trinnov system) can definitely produce impressive results.

Implementing the iLoud MTM's onboard room correction is about as simple as could be. You set up the supplied measuring microphone at the monitoring position (or of course at any other listening position you'd like the correction to be focussed on), connect the mic cable to the 3.5mm jack socket on the rear panel of one of the monitors, press and hold the rear panel CAL button for two seconds, and wait for the monitor to do its thing. Said thing is a five–second pause to enable you to get out of the way, followed by the monitor playing four preset-level sine–wave sweeps. The whole process takes around 15 seconds. Confirmation of a successful result is indicated by the front–panel LED temporarily flashing green. Apart from repeating the process for the second monitor (importantly, with the mic left at the same position), that's all there is to it.

The simplicity of the ARC implementation on the iLoud MTM, however, also means that it is somewhat limited in comparison to the full-fat version of ARC. For example, the full version enables correction curves to be created from a composite of multiple response measurements at different mic positions. It also enables multiple correction curves to be stored and recalled, either for different monitors or for different monitoring positions. Target correction curves are provided too. They can bend the character of a particular monitor to take on alternative tonal characteristics — that of a 'boombox' or a TV speaker, for example. The iLoud MTM version of ARC incorporates none of these enhancements; it simply flattens the frequency response at a single target monitoring position. Of course, it's always possible to re-run the iLoud MTM ARC procedure for a different monitoring position, and it would be a quick job, but it's a step that I'm not convinced many users will take.

As to the question I raised on the interaction between the iLoud MTM EQ options and the use of ARC, the protocol is that the desk EQ option is unavailable when ARC is operational, however the other EQ options can still be engaged on top of the corrected response. This makes reasonable sense to me. The desk EQ option is effectively an acoustic correction that, if the monitor is desk mounted, ARC should provide, while the LF and HF EQ options are more a matter of personal taste.

One more observation about the ARC process before I move on: as the ARC sine–wave sweep begins, the iLoud MTM demonstrates a little audible low–frequency distortion and reflex port noise.