With an ever-expanding choice of controllers to turn your modular system into a performance instrument, it's always worth remembering tried-and-tested classics, such as the joystick. A joystick supplies an element much-appreciated in the modular world (joy) as well as giving tactile, intuitive control over synth parameters. 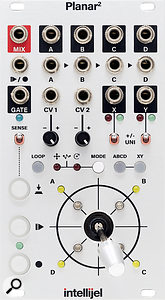 Intellijel Planar 2. Size: 14HP. Current: +12V 85mA, -12V 32mA.Thanks to its multi-axis approach, Intellijel's Planar 2 offers more than traditional designs. It sports two independent groups of outputs; an ABCD quadrant set and the more regular XY. There's a gate generator button for triggering envelopes and the like, and to round things off, a Gesture Recorder is ready to capture those joyful wiggles and turn them into hands-free modulation sources.

My first impression was of a high–quality, great-feeling joystick; smooth in operation but staying exactly where it's put when you stop. The connections are sensibly positioned at the top, leaving a clear working space for fingers. It's a decent length too (making the stubby stick of my EMS Synthi appear slightly inadequate in comparison) and as you move, the changing voltages are shown by variable-intensity LEDs: red and green for the XY axis and yellow for each of the ABCD outputs.

With generous I/O and a thoughtful interface, the Planar 2 is clearly not an average controller, and if further evidence is required, the manual is 40 pages long and packed with ideas. Fortunately, you needn't dive in right away as it's easy to plug in and get right down to familiar XY action. Either axis can deliver 0-10V or -5V to +5V, the LEDs indicating current polarity (green for positive, red negative). Nor are the quadrants any more complicated — they output unipolar 0-10V and work in parallel with the XY outs. The Mix output is the sum of the ABCD quadrants, so sends 0V at the centre and 10V at any of the extremes. All things considered, it's a multitude of voltage sources.

The Planar 2 is not limited to control signals. There are four audio inputs and whenever one or more is employed, you enter a world of quadraphonic panning, vector-style cross-fading, etc. Moving a single source around four possible destinations is a fab way of shifting it between various processors or filters. It's equally straightforward to create Prophet VS waveform blending, the results available at the Mix output. My last suggestion is based on the discovery that the inputs handle CV too. You can therefore serve up joystick-driven fades between different modulation sources, such as LFOs or sequencers.

The Gesture Recorder transforms the Planar 2 into a powerful and flexible modulation source.

Even the humble gate button has a couple of extras. Thanks to the small 'sense' switch, you can opt to send a constant 'gate on' whenever the joystick is in motion. In addition, you can capture this, or manually played gate patterns, into the Gesture Recorder alongside your wiggles.

The Gesture Recorder transforms the Planar 2 into a powerful and flexible modulation source. Simply hit the record button and let rip — the recorder will grab and replay up to 30 seconds of joystick movements and gate on/off events.

Buttons select the way both the XY and ABCD outputs are influenced by the joystick and — as I was starting to expect — it's pretty comprehensive. A lit status means joystick motions or gesture recordings are sent out, mixed with anything present at the CV inputs, while an off status passes only the CV input. A slightly longer press makes the button flash, and in this case only the joystick's physical position is sent. This last mode is particularly welcome because it frees up the stick for manual playing in, for example, XY mode, while previously recorded gestures are simultaneously sent to the quadrant outs.

Depending on whether you activate looping, your CV recording is treated as a really flexible LFO or an envelope. And by sending an external trigger pulse to the record/playback input, you can synchronise the capture or playback process.

I briefly mentioned the CV inputs, themselves unusual, given that joysticks were historically output-only devices. However, these provide external control over the XY and ABCD outputs, for automating vector fades and so on. Three modes influence the way incoming CV is treated: Cartesian, Polar or Scan. Cartesian mode is comparable to plotting points on a graph, in which CV1 is the X axis, CV2 the Y axis. Polar mode is ideal for creating swirling patterns, with CV1 setting the rotation and CV2 the radius. Lastly, Scan mode is slightly different in that it works on your gesture recording, allowing you to scan through it at whatever speed you desire, forwards or backwards.

This is a joystick that is both accessible and powerful; it offers all the core functionality you'd expect, fleshed out with extras so it can take on other roles too. As a complex modulation source, its many outputs are a blessing, especially in a small system. Perhaps best of all, the Planar 2 gives you the freedom to play while the Gesture Recorder plays back previously captured motion data. A source of deep joy!