The Tetrapad and its expander, the Tête, offer a wealth of functions based around four touch- and pressure-sensitive sliders. On the TetraPad itself, each slider offers a pair of CV outputs and a clickable encoder used for a variety of functions. In its default mode, each slider outputs fader position and pressure CVs, but by switching modes the sliders can be set to function as switches, drum pads, voltage stores, chord generators, a keyboard or four independent LFOs. 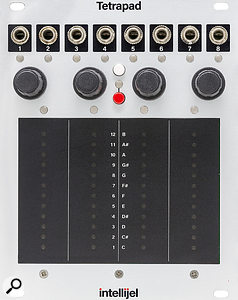 Intellijel Tetrapad: 20HP. +12V 130mA, -12V 15mA.On its own, the 20HP Tetrapad makes an excellent multi-purpose controller. When adding the 8HP expander, however, the functionality of the Tetrapad changes so much that there is actually a separate manual for the Tetrapad plus Tête. Everything the Tetrapad can do on its own is still possible, but the Tête becomes the brains of the operation adding extras like an OLED screen, sequencer, gesture looper, preset saving, plus a selection of freely assignable modulation inputs and outputs.

Together they work in one of three modes: Combo, Notes or Voltages. Combo mode is perhaps the most flexible, allowing for each of the four sliders to be configured separately. Each slider can be assigned a role as a simple fader (unipolar or bipolar), crossfader, euclidean pattern generator, dual switch, LFO or a four-way voltage store. The pair of CV outputs above each slider changes depending on the chosen role. In fader mode, the CV outputs will generate voltages dependant on position and pressure. In crossfader mode, they will generate the two sides of a crossfade, with both outputs generating +5V when the crossfader is in the central position. In euclidean mode, the first CV output will generate triggers according to the current tempo and euclidean settings. The second CV output reflects slider position. In switch mode, the physical slider is split into two halves, each of which becomes a switch, with the CV outputs generating on/off signals. In LFO mode, the two CV outputs generate phase-opposite versions of the chosen LFO shape, while the slider controls the LFO speed. In voltage bank mode, the slider is split into four trigger zones, each of which can store a pair of voltages which appear at the CV outputs when that zone is triggered.

Most modes allow you to tailor the CV output range. For example, full range for a bipolar fader or LFO would be -5V to +5V, but this can be reduced as far as -1V to +1V. Additionally, and where appropriate, the CV outputs can be quantised to a chosen global key and scale. It's a lot of fun generating scale-quantised CV streams from LFOs and sliders. All modes also allow latching, where the slider remembers the last position of the slider rather than snapping back to a zero position when you remove your finger. Lastly, each slider can have variable slew applied to it, allowing for CV values to glide smoothly from one to another.

In Notes mode, the four sliders work together as a touchpad keyboard of up to 16 keys. The CV outputs are no longer grouped as pairs, but instead output four 1V/oct CVs (so you can output four-note chords), trigger, gate, key position and key pressure. The keyboard, and its four pitch CV outputs, can be configured to work in a variety of ways. By Scale will auto-map keys to the global key and scale, with diatonically shifted versions of the scale appearing at the four outputs. By Chord allows each key zone to output a four-note chord with inversions and rotations supported. Finally, for those who like total control, you can manually map each zone and output to a specific note.

There's a lot to like about the Tetrapad/Tête combo. Intellijel have made a feature-heavy module which doesn't feel overwhelming.

Voltages mode behaves much like Notes mode, but is not concerned with chromatic beautification, although you can still quantise the output. Instead it stores eight voltages (one for each CV output) in up to 16 zones. The voltages can be entered manually or randomised. Voltages is a great way to recall specific sound states in the rest of your modular — a preset storage system — and is especially fun with slew applied to the outputs.

Intellijel Tête: 8HP. +12V 120mA, -12V 6mA.In any mode, you can make use of the Looper, which will record and play back your finger movements on the sliders. A dedicated set of transport buttons triggers recording and playback. Looping can be sync'ed to internal or external clock, or not at all. In Combo mode, any of the four sliders can be excluded from the Looper, allowing you to mix and match 'live' sliders with looped ones.

In Notes and Voltages mode, the Looper can be swapped for a fully fledged SH‑101-style sequencer. This allows you to program and play back up to 256 steps of notes or voltages. Both the Looper and the Sequencer don't record the actual CV values at the outputs, but instead record what you press on the sliders, which means you can, for example, change a certain chord shape in Notes mode, and the sequencer will output the new chord when the appropriate zone is triggered.

When playing back, both the Looper and Sequencer benefit from what Intellijel call 'Loopy'. It's activated using the dedicated button in the transport controls and enables a sub-loop within the overall sequence. If you were playing back a 16-step sequence, and you have Loopy set to three steps it will, when enabled, loop the next three steps in the sequence until disabled, at which point the 16-step sequence will carry on from where it would have been. Loopy is a nice little performance trick, and becomes even more interesting when triggered externally using the Tête's modulation inputs.

The six modulation inputs and three outputs on the Tête can be assigned to a huge array of functions, more than I could possibly go into. By default they are set to clock functions, allowing you to use an external clock to sync, trigger and reset the sequencer or looper. But, they can be re-assigned to control Loopy, automate slew, offset slider values, change scales or select banks. In Combo mode, you can choose to target specific sliders on a per modulation input basis.

Phew. There is more that I haven't covered, like the clever use of LED colours to indicate the type of CV being produced, or the fact that you can save and load entire setups to the internal storage. And I particularly like that the Tête will automatically recall the current settings when you power cycle, so it will always boot up exactly as you left it.

There's a lot to like about the Tetrapad and Tête combo. Intellijel have made a feature-heavy module which doesn't feel overwhelming. Reading the manual is a necessity but, once you do, everything becomes logical and well implemented. If you're looking for a touchpad performance module with powerful sequencing and gesture recording, the Tetrapad and Tête should be high on your list.