JBL's compact new PA speaker is small and cheap — but sounds quite the opposite!

When JBL designed the compact, two-way, active IRX108BT speaker, they clearly went out of their way to make it meet a wide range of needs. At one end of the spectrum we have gig PA applications, perhaps using the speakers in pairs, while at the other we have presentations and other scenarios where a single speaker might be adequate, as well as on-stage monitoring — it has multiple applications wherever amplified sound is required. Its onboard DSP provides EQ and features dbx feedback suppression, while for DJ use the speaker also incorporates Soundcraft's 'music ducked by voice' system. Music can be streamed into the speaker via Bluetooth 5 (supporting Bluetooth True Wireless Stereo for when you're using pairs of speakers), and everything has been designed to be easy to use for non-experienced operators. Four EQ presets called Music, Vocal, Speech or Flat match the speaker response to the most common applications, and basic mixing is afforded courtesy of two mic/line 'combo' jack/XLR inputs and the aforementioned Bluetooth input. There's also an XLR 'thru' output that can be used to feed additional powered speakers. A larger 12–inch, the IRX112BT, is available for those who need more power. 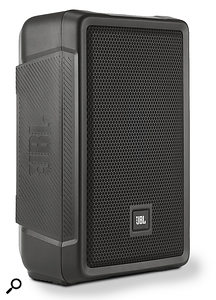 Assembled in China to keep the selling price down, the speakers are designed in the US by JBL. The cabinet is moulded from polypropylene and houses a JBL 8–inch bass/mid driver augmented by a 1-inch titanium tweeter, both protected by a full-size frontal honeycomb steel grille, which is backed by acoustically transparent fabric to prevent the ingress of dust. The cabinet shape means that the speaker can be positioned at an angle as a horizontal floor monitor, if desired. A standard 35mm pole-mount socket is moulded into the cabinet base along with side and top handles. Dispersion is quoted as 90 degrees horizontal by 60 vertical, and a frequency response is given of 54Hz to 20kHz (±3dB), along with a peak SPL specification of 124dB. Power comes from a Class–D, 1300W (peak) bi-amping pack run from a switch–mode PSU, so the speaker is fairly light at under 8kg. Its overall size is 258 x 313 x 486mm, so a pair should fit in the back of even the smallest car.

At the rear of the cabinet is a metal plate that houses the control panel, and this is recessed to keep it safe during transport. The only variable controls are gains for the two input channels and a master volume — everything else is controlled by buttons. There's no phantom power, though for larger–scale applications most users will probably employ an external mixer anyway. At the top of the panel are the four voicing preset indicator LEDs, stepped through using a single button, and there's also a power button. In the row below are latching buttons to bring in Bass Boost, Anti-feedback and Music Ducking, plus there's a momentary-action button for Bluetooth, which you press and hold for two seconds to start the pairing process. There's no separate level control for the Bluetooth input, so this has to be adjusted at source. All the Bass Boost, Anti-feedback and Music Ducking functions are either on or off — there's nothing to adjust. The 'combo' and XLR thru connectors are directly below the rotary controls, with an IEC power inlet at the bottom of the panel. 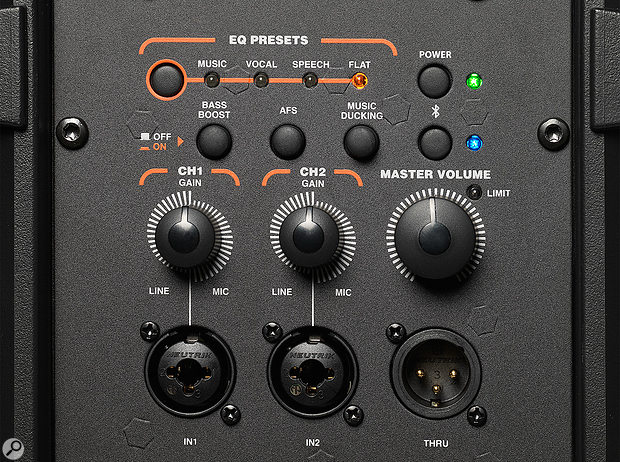 All controls and inputs reside on the rear panel.

In my practical tests this speaker didn't disappoint: it is much kinder to music than most two-way 'box' speakers equipped with larger drivers, and while not quite up to studio monitor standards, presents recorded music as well balanced, without losing mid-range clarity in the way that some large PAs can. Vocals come over clearly without undue harshness or honkiness, and there's also more of a punchy bottom end than you might expect from such a compact speaker. If vocals are all you're putting through it, though, the Vocal preset to curtail the low end helps avoid feedback problems and reduces spill from bass instruments.

The sound quality rivals that of compact column speakers...

Either mic input works to duck the Bluetooth audio stream when the ducker button is engaged: as soon as you speak the music level drops significantly, then fades back in as soon as you stop speaking. The anti-feedback processing also works very effectively if used correctly when ringing out the system, and is able to get rid of problem peaks and ringing without compromising the basic sound. This feature employs well-established dbx technology, deploying very narrow notch filters to match the feedback frequencies. There are 24 notch filters in all and if you need to reset them you can press and hold the Anti-feedback button for three seconds, upon which the Vocal and Speech LEDs light three times to confirm your action. The best way to set it initially is to turn up the mic level until feedback starts, wait for the filter to notch it out, then increase the level a little more to tackle the next peak that arises. If you do this four or five times, there will still be filters left to step in during performance if the mic is moved, though pre-feedback ringing generally becomes very audible before the feedback suppressor catches it so the more you can do at the setup stage the better. When you're done, it is safest to back off the overall level by a few dBs.

Given its typical price of around $£300 in the stores, the IRX108BT is extremely good value — you could buy a pair for less than the cost of a typical budget mini line array, and because of the relatively small main driver, the sound quality rivals that of compact column speakers, albeit without the wide, shallow dispersion pattern of the latter. This speaker can get surprisingly loud before sound quality starts to suffer, and the anti-feedback feature is a great help for those with quieter voices. A pair would work well for solo artists, duos or even a full band, as long as you don't put drums through them. Add an active sub and you'd have a very powerful yet still compact system that would work well for live music or mobile DJ use. JBL describe the IRX108BT and IRX112BT as entry–level speakers, and their pricing reflects that, but their performance may surprise you.

The Mackie SRM350s would be worth considering, but there are many small active speakers on the market at a range of different prices from companies like Behringer, ART, RCF and others.

The JBL IRX108BT is a very capable and good-sounding speaker well suited to smaller pub and club performer ensembles and also loud enough to use with a band in small venues, as long as it's mainly handling just vocals.

£299 per speaker including VAT.