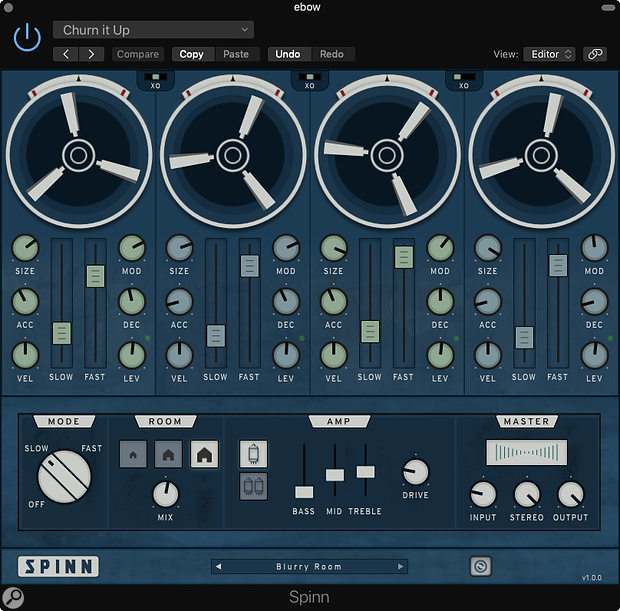 Ever wondered how a Leslie cabinet with four different speakers would sound?

The designers of Klevgränd's Spinn (VST, AU and AAX; Mac and Windows compatible) say that they didn't set out to create a precise emulation of a Leslie speaker. Rather, they took that concept as a starting point, then went on to create something a little different. It's certainly that, and giving a Leslie-style rotary-speaker emulator four different frequency bands might appear excessive, given that the real thing offers only two. But they say nothing succeeds like excess, and you can get pretty close to a Leslie sound if that's what you want.

The plug‑in hosts four 'rotor' sections, each fed from a crossover, with a choice of three crossover frequencies between each band. Each section has separate slow and fast speed controls, separate acceleration and deceleration times, and adjustable size and modulation. The Size parameter dictates the size of the virtual rotor horn, and thus how pronounced the Doppler effect is, while the Modulation control adjusts the depth of the filtering and amplitude modulation components of the effect, to make it more or less intense. There's also a Velocity control for each band, and this modifies the rotor speed according to the level of the input signal. There's also a level control for each band.

A rotating fan graphic at the top of each section indicates the current modulation speed, though this can be turned off to consume less CPU. A pointer above the fan shows the deviation from the current speed setting, which you see during speed changes and also when using the Velocity function, and which can be positive or negative.

Having four bands to play with can really add to the richness of the end result.

You can select speeds of Slow, Fast or Off, just as you can with a Leslie–type speaker, plus there are three room emulation options, with a wet/dry mix control. To add a bit of grind, there's a very simple amp-modelling section, which can be set to either Clean or Hot, and is controlled by three EQ sliders and a Drive knob. It's not bad, but if you have more sophisticated amp modellers available, you might find that using one before Spinn gives you more flexibility. Level controls are provided for the input and output, plus there's a width control that goes from mono to full stereo.

Operating Spinn is really straightforward because the user interface is extremely clear and intuitive. As with a traditional rotary speaker, the interaction between the bands as you speed up or slow down the modulation can add a wonderful complexity to a sound — but with four bands to play with, you can achieve a much richer–sounding result.

There's also nothing to stop you setting the speeds of one or more bands so that the fast fader setting is slower than the slow fader setting — that way, when you change the master speed control, some bands will speed up while others slow down, which can sound pretty interesting! Having that Velocity control is also useful, as it lets you make the effect 'breathe' according to input level, with the relative speeds of the rotors constantly changing. There are some factory presets to help you get started, but setting up your own patches is the work of seconds, and very easy — you can then store them for future use.

Whether used to add a slow, textural modulation or a shrieking high-speed spin, this plug‑in does a fine job, and at more subtle settings it makes a welcome alternative to the likes of chorus or phasing. I also like what it does when placed before or after a reverb — there's plenty of scope for experimentation. In short, it's a lovely effect with an attractively low price tag.

Spinn takes the concept of a rotary speaker and extends it to four frequency bands to produce a versatile modulation effect that can go from very subtle to severe — a lovely effect at a good price.