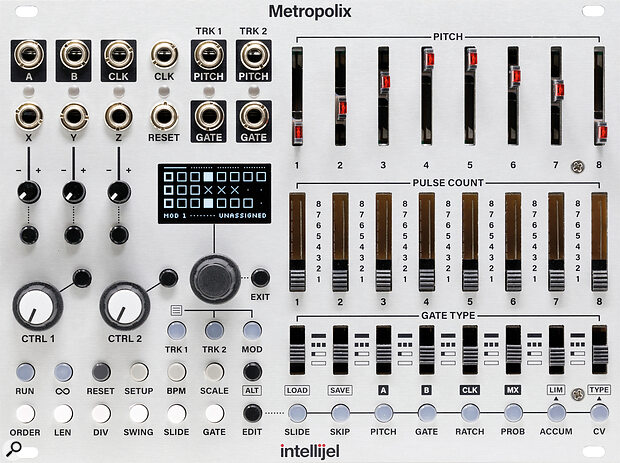 Vancouver’s Intellijel Designs could have left their Metropolis exactly where it was and still have something of an industry leader in their arsenal. That sequencer, inspired by the Roland System 100m format Ryk M‑185 brought something exciting to the table: eight physical stages were endlessly pliable with adjustable pulse counts, gate types and order, not to mention assignable inputs for all kinds of parameter modulation. Now they return with the Metropolix: a module that maintains all the key traits that made its predecessor a hit while expanding its horizons enormously. Key developments include a second gate and CV track, three auxiliary inputs, two assignable control knobs, on‑the‑fly playability and a cavalcade of new modulation options. Plus there are some very pretty coloured LED buttons.

The right‑hand side of the Metropolix is more or less unchanged: eight neat LED‑tipped pitch sliders hover over a row of stepped ‘pulse count’ sliders, which offer up to eight pulses per step. In this way, eight steps actually become any amount up to 64. Below these lies a row of ‘gate type’ sliders, which select how a stage behaves relative to its pulse count slider’s setting. While the Metropolis’ bottom line of buttons controlled slide and skip settings, the Metropolix has added six more options to this row, which I’ll come to shortly. On the surface it’s a simple interface and easy to achieve interesting and expressive sequences straight out of the box. I soon realised that this is certainly a good thing, because from then on in it’s a case of seeing just how much is possible with this module.

If Intellijel ever had a motto to go with the Metropolix, I’d imagine it would be something along the lines of “If it ain’t broke... Improve it.”

The left side of the Metropolix’s panel is where things have really changed. The seven‑segment display of the Metropolis has morphed into a detailed OLED screen, which not only gives detailed overviews of what’s happening in your sequence via a choice of four different home screens, it also allows for incredibly detailed parameter display and control. It even has a cute little screensaver! The Metropolis’ two aux inputs, A and B, have here become three: now called X, Y and Z. A and B are now used to label two new auxiliary outputs, which can use voltages generated within the Metropolix to control other modules, such as modulation CV or the root pitch value of a sequence. X, Y and Z, each with their own attenuverter, in turn allow parameters in the Metropolix to be modulated with CV from elsewhere in your system. Two assignable control knobs can be routed to control any two parameters on the module, from gate time to play order and slider range, and can also directly send CV out through either of the auxiliary outputs if you so choose.

The aforementioned stage buttons on the Metropolix add to the Metropolis’ slide and skip functions a buffet of formidable new ones: pitch, gate, ratchet, probability, accumulation and CV. Most remarkable of these is the accumulation function, which increments or decreases the pitch of a chosen stage by an allocated value with each new pass of the sequence. I found it highly gratifying, for example, to set the first note in my sequence at a much lower pitch than the others and apply accumulation to it, so it became a type of self‑generating bass line for an otherwise repeating sequence of notes. Clever stuff.

Nestled in between the run and reset buttons is a curious function, simply labelled with a figure‑of‑eight symbol. This is the charmingly named ‘loopy’ function, which strikingly illuminates the stage buttons in moving blue, pink and purple and allows you to use them to ‘play’ a sequence manually, freezing the transport on a certain step or steps (to create a sub‑sequence) while the clock is running, or play the stage buttons like a keyboard while the clock isn’t running. Immediately I found new applications presenting themselves: I could turn the simplest of kick‑snare drum patterns into expressive, complex and non‑repetitive rhythmic passages, or hold a section of a melodic sequence in tension until the right moment to unleash the rest of the line. Combine this with the two control knobs (which in this context could almost become ‘mod wheels’ to the stage buttons’ ‘keyboard’) and we find ourselves worlds away from that humble eight‑step sequence we began with.

The message is clear: while Metropolis brought a fresh take on the Ryk M‑185 school of sequencing and promised to augment patches and sequences with a fine combination of chaos and order, the Metropolix wants to be the very genesis point of your patches and the centrepiece of your system. Its inputs, outputs and controls can be anything you want them to be; it’s highly playable in a live setting and it can also influence other modules in your patch in remarkable ways.

There are some negatives I could bring against the Metropolix’s usability, but most of these are simply the upshot of how much Intellijel have crammed into this module, so it’s hard to complain. The menus aren’t always the easiest to navigate, and while ‘menu‑diving’ is largely avoided here I’d still call the Metropolix ‘menu‑heavy’. Very small dots and symbols on the OLED screen often represent important information but can be easily missed. Alternate uses for buttons abound, either with the ‘alt’ button or through long‑pressing, to an extent where I felt like even months of using this module every single day wouldn’t prevent me from needing to refer to the manual every now and again. As I say, though: this is the double‑edged sword of such incredible functionality. After all, you don’t have to use all of those functions; with only one or two of them active you still have a very powerful sequencer in your arsenal.

Where Intellijel have truly excelled here is the way they have made the most conspicuous elements of the Metropolix accessible and quick, while keeping a huge amount of complex parameter and modulation control just under the hood. In this way the Metropolix very much grows in functionality as you grow in familiarity with it. The Metropolis took Eurorack sequencing into new territory, and this module has taken it even further. If Intellijel ever had a motto to go with the Metropolix, I’d imagine it would be something along the lines of “If it ain’t broke... Improve it.”