With so many wonderful music apps for iPhone and iPad out there, the tiny internal speakers on those devices can become a serious limitation to sound quality, and not everyone wants to use earphones all the time. If you have a pair of active studio monitors you can plug into, then fair enough, but what if you don't, or if you need something more portable? Well, there are those cheap yoyo-shaped things that claim all manner of benefits, but in reality most sound pretty horrible; or there are various docking stations with speakers that rarely qualify as hi-fi. So what's the alternative? Well there are more upmarket solutions, but IK multimedia's iLoud competes with the best of these and is more musician friendly, as we'll see in a moment. 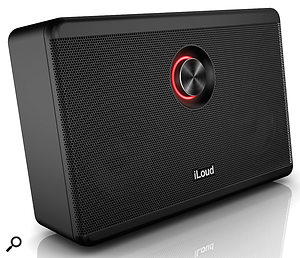 Essentially the iLoud is a portable (mains adaptor or rechargeable battery powered) mini two-way active speaker system. It has both left and right drivers, mounted in a single box that's only 60mm deep and whose front panel has the same dimensions as an iPad. A fully charged battery can provide up to 10 hours of play time, with charging taking around two hours. A charge-status LED is located on the rear of the panel, where a swivel foot at the base adds stability when standing upright.

The iLoud is ported to deliver a plausible low end and is powered by a total of 40 Watts of Class-D amplification (specified as Music Power, which is a somewhat vague term these days). In any event it plays surprisingly loudly and, more importantly, cleanly. This would seem ideal for the musician who simply wants to make basic recordings on an iPad using GarageBand or similar, but it also provides an effective means of hearing those amp-modelling apps and software instruments in their full glory. And of course it's also ideal for general music playback.

Though compact, the iLoud is a true active, time-aligned two-way system built around custom neodymium-powered loudspeakers (each approximately three inches in diameter) mounted in a rigid, low-resonance ported enclosure. The tweeters are around 0.75 inches in diameter and are spaced as widely as possible so as to maximise the stereo image. In fact IK claim that this arrangement produces studio-quality sound... There's an analogue mini-jack input and also an input gain/sensitivity control on the rear panel, and a rotary encoder volume control on the front panel complete with an illuminated ring. This ring flashes when the level is turned fully up or fully down and alsopulses to indicate when the iLoud has switched to standby after a period of inactivity.

There's more to the iLoud than that, though, as it also features a built-in iRig guitar/mic preamp (quarter-inch jack) for use with an electric guitar or with a dynamic mic. This iRig functionality means you can indulge in real-time sound processing via your music apps without the need for a separate audio interface. How? Simple: the supplied mini-jack cable is a TRRS type, allowing two-way data transfer, so it simply connects between the socket on the iLoud and the mic/phones socket on the iPad. Plug in your guitar, tell your app to use the mic input and it all just works.

For general music playback — assuming you don't mind a bit of latency — you can stream audio to the iLoud wirelessly from your iOS device via Bluetooth. A Bluetooth pairing button on the rear panel gets the two devices talking to one another, after which any music played on your iPad is fed directly to the iLoud where the level can be controlled by the front-panel knob. Two sets of pairings can be stored by iLoud so you can switch between playback devices without having to 're-pair'.

While IK Multimedia's claims of 'studio quality' may be a little optimistic, the iLoud's sound quality is still pretty impressive, with punchy but not overblown lows and plenty of detail in the mids and highs. It certainly compares well with other, often more costly, compact Bluetooth speaker systems, and that iRig input is an important addition for musicians. It also has plenty of volume in hand, though the stereo image is understandably somewhat narrow due to the close proximity of the left and right speakers.

Being able to plug a guitar or mic into the iLoud and then hear the results come back via amp- or effects-modelling software on your iOS device is great for practice or front room performances, while general music playback or mix auditioning sounds much better than it has any right to from speakers this small. Because of its high quality, the iLoud isn't exactly cheap and you could buy a set of small entry-level studio monitors for around the same price, but if you need portability it makes a very attractive proposition.

OneTrack, recently updated to version 4.0, was created by Sean Bergin, and is essentially a backing track player for the iPad or iPhone (iOS 7 or above) that provides all the necessary features to do the job but without adding unnecessary complications. Multiple playlists can be imported from iTunes and then be edited to play only the desired tracks, and individual track levels can be set as well as the master overall playback level. The start and end points of each track can be adjusted if necessary, and there's the option to set a fade time for tracks that have been shortened. 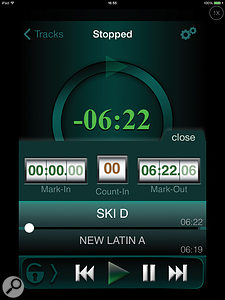 OneTrack's main page. Most importantly, tracks stop once they've played to the end unless you specifically set them to play through to the next song, which you can do globally or on a per-track basis. There's also the option to loop tracks, so if you fancy playing an endless 12-bar blues to get into the Guinness Book Of Records, that's no problem. On a more practical level, you can use this feature to cycle round parts of a song you are trying to learn.

Ease of use is obviously paramount, and OneTrack includes large transport buttons and title displays so everything is clear, even on the small screen of an iPhone. There's a lock mode (which turns the screen shading from green to red) that you can engage after editing any of your playlist parameters to prevent accidental changes being made. The currently selected track is clearly shown, with the next one in line shown beneath it in less bright text. The track time is shown at the top of the screen with the remaining play time for the current track displayed at the centre of the screen with a shaded progress bar behind the song title. When unlocked, you can move through a track using an iTunes-style slider, and open up a time display for track trimming and for setting a count-in/pre-roll period.

Swiping across the screen takes you back to the playlist, and if you decide you need to skip a tune or accede to a request, you can deviate from the planned playlist if you want to. Stopping a track before the end when lock mode is on brings up a big button asking you if you want to stop and rewind to the start of the track. If you don't hit the 'stop and rewind' button during the few seconds during which it is displayed, the song continues to play. Fast-wind buttons are also locked out, and hitting Pause brings up another big button centre screen saying 'Pause?' This simple strategy prevents clumsy 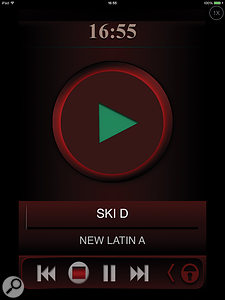 OneTrack's lock mode is designed to protect playback from your clumsy probings. fingers messing up the playback. Lock mode also prevents the iPad falling asleep on you. Moving to the playlist and selecting a new song also stops the current playback with a fast fade. There's no option to show lyrics or cheat sheets on the main playback screen, but you can enter Cue Sheet notes and song info in the Settings section and export a PDF for printing.

Other features available via the Settings menu include the option to use a Bluetooth pedal, the use of tempo for a visual count-in (where tempo details have been entered in the Cue Sheet section) and the option to automatically disable a track after playing it. In locked mode the screen rotation is fixed, but you can switch this before sliding the lock icon into place.

A tip about using OneTrack: remember to engage Airplane mode and disable alerts on your iPhone to prevent an unplanned phone call becoming part of the gig.

Providing you don't need lyric prompts or chord sheets to show up on screen as you're playing, this app ticks all the right boxes for reliability, simplicity and just the right degree of user controllability. The developers also actively encourage suggestions and constructive feedback, so considering the very low price of the app, it has to be a winner.