HOFA claim that their IQ Reverb combines the realism of convolution with the editability of algorithmic reverbs.

When convolution reverbs first appeared, mix engineers quickly found that with the step up in realism compared to older algorithmic designs came a new set of frustrations. Impulse responses could capture the character of a real space in a way that was not previously possible, but if a particular IR didn't suit your mix as it stood, there was relatively little that could be done to adapt it. And although the modulation features in algorithmic reverbs might not always have been strictly realistic, they gave those reverbs a warmth and an organic quality that can be lacking in basic convolution.

In recent years, therefore, we've seen quite a few reverb plug-ins that attempt to extend what's possible with impulse responses, the aim being to make convolution reverb more 'human' or more amenable to the kind of editing that has always been used to make algorithmic reverberation fit into a mix. EastWest's Quantum Leap Spaces, for example, is based around an IR library captured using vintage microphones and valve gear, while the latest version 7 of Audio Ease's Altiverb includes such features as 'chaotic modulation' to introduce randomness into the output, a neat interactive 3D display of the impulse response, and a 'stage positioner' allowing you to vary the location of your source within the acoustic space.

The newest kid on this particular block comes from German developers HOFA. IQ Reverb aims to "combine the diversity of a convolution reverb with the flexibility of a traditional reverb effect processor”, and to this end, incorporates advanced features like modulation to introduce randomness into the output, a neat interactive 3D display of the impulse response, and, er, a 'positioner' allowing you to vary the location of your source within the acoustic space.

There's no denying that it has much in common with the latest version of Altiverb, then, but there is also a case for saying that IQ Reverb is more than just a 'me too' product. One of the main selling points of Altiverb, and the reason why it is still quite expensive compared with many convolution reverbs, is the huge library of impulse responses with which it ships, many of them lovingly recorded in well-known studios and concert halls. IQ Reverb comes with a reasonably substantial impulse library, but its contents are described using generic terms such as "short drum room” or "large plate”, and there are no photos or other clues as to their sources. The point seems to be to try to get the user to treat these not as pristine recreations of recognisable spaces, but as starting points from which to craft the sound that suits their track — in the same way you might treat presets in an algorithmic reverb. To emphasise the point, there's also a fairly large selection of preset settings, 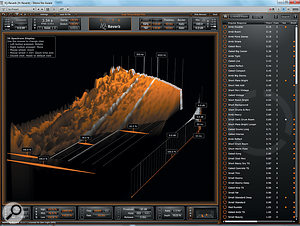 which encompass an IR plus all IQ Reverb parameters.

The IRs and presets are accessed through a large browser window, and a nice touch is that each is categorised according to which instruments it's likely to suit. You can sort them either by their length or by clicking on the header of one of the instrument columns, making it easy to find, say, all the presets suited to vocals or guitars. Annoyingly, however, the sorting defaults to showing all the suitable results at the bottom of the list. You need to click again to reverse the order, and if you close the plug-in window and then reopen it, the preset list returns to its default order. One option I like, though, is the ability to load a new impulse response without altering any other settings such as wet/dry mix.

A View Into Space

Once you've chosen your large plate or medium chamber, it appears in three-dimensional representation in the other main area of the IQ Reverb window. Here, you can use the mouse to pick it up and spin it round in any direction you choose, zoom in and out using the mouse wheel, and click and drag to alter key parameters such as the overall length of the reverb, the amount of pre-delay, and the damping and tonal balance — of which more in a moment. All of these parameters and more are also available as conventional controls, and you can also resize the plug-in window and its various elements to your taste. Though IQ Reverb would be perfectly usable without the 3D display, it does provide a useful way of visualising an impulse response, making it easy to tell bright from boomy at a glance. If you want to make the mixing process look impressive to clients, you could do worse than take your IR for a spin here!

Most convolution reverbs offer an equivalent to IQ Reverb's Time parameter, which, as far as I can tell, simply time-stretches or compresses the impulse response to make the reverb longer or shorter, crudely modelling an increase or decrease in the volume of the space. As ever, this is a useful feature, though it can begin to sound distinctly odd the further away you go from the default 100 percent setting. However, IQ Reverb also offers other ways to shape the sound of your impulse response. One such is the Damping parameter, which aims to change the reverb time not simply by time-stretching the IR but by recalculating to simulate an increase or decrease in the reflectivity of the space in which it was sampled. At the top of the GUI are two buttons labelled '+' and '-' which adjust both the Time and the Damping simultaneously, when you quickly want to make an IR shorter or longer. I found these were generally very effective, especially in those situations where you like a reverb but want to make it a little shorter.

Unlike many reverbs, IQ Reverb doesn't have a conventional EQ built in. However, it splits its impulse responses into three frequency bands with adjustable crossover points, allowing the user to modify the tonal balance, either using three sliders in the 3D view or the controls in the Freq section. The manual isn't entirely clear about how it works, but the idea seems to be that dynamic filtering is applied to the IR to simulate a faster or slower decay within the chosen frequency band. For instance, if you like an IR but find that it tends to 'rumble' at the low end, you could scale back the reverb below 150Hz or so without affecting the mid-range or high frequencies. Likewise, if a vocal reverb is exaggerating sibilance too much, you could force frequencies from 4kHz up to decay more quickly.

Further tricks up IQ Reverb's sleeve include a conventional gate, for those '80s drum sounds, and the related but subtly different 'cut', which trims the IR to a specific length, ensuring that each burst of reverb lasts exactly as long as you like before cutting off. Cut and gate hold time can be tempo-sync'ed. Finally, there's the positioner, a small schematic representation of a square room within which you can drag yellow blobs representing your sources (you can choose whether to have a single blob or separate ones for the left and right input channels).

If my experience of using IQ Reverb is anything to go by, I'd say HOFA's developers achieved their aims, at least in the sense that I quickly forgot I was using a convolution reverb and began to muck about with IQ Reverb's presets just as I would those of an algorithmic reverb. As in classic Lexicon designs, the level of control available is just right: there are few enough parameters that you can get to grips with them all fairly quickly, but at the same time, the parameters that are available provide pretty extensive 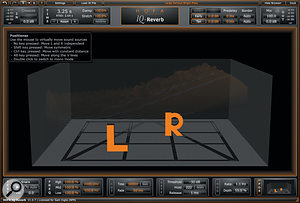 The positioner allows you to place your sources within the virtual space created by IQ Reverb. It works surprisingly well. control over the sound. The user interface is very slick, especially that rotating 3D waveform display, and the browser makes choosing presets and IRs almost painless. I did, however, experience one or two crashes where IQ Reverb seemed to hang on loading an IR.

HOFA's innovations certainly make this very flexible by comparison with generic convolution plug-ins, though I don't think I would quite go so far as to say that IQ-Reverb can yet match a good algorithmic reverb in this regard. The damping and filtering allow you to make reasonably significant adjustments to an impulse response, but eventually you notice things sounding unnatural, especially when you want to lengthen an IR. And while the positioner worked a lot better than I had expected, it doesn't quite offer the same jaw-dropping realism of the Flux IRCAM Tools Spat plug-in. Also, unlike an algorithmic reverb, most of the important parameters are adjusted stepwise rather than continuously (in other words, the sound doesn't change as you drag the mouse, but when you let go) — understandably so considering that the IR has to be recalculated each time. It's perhaps fairest to say that where an impulse response is nearly right, IQ-Reverb lets you make it just right, but don't expect it to turn a bathroom into a concert hall.

Though the factory IR library is not in the same league as that of Altiverb, and doesn't include much that would be useful in film or TV post-production, it provides enough variety for most music-production contexts, and I never found myself stumped for something that would suit a source. I was particularly taken with some of the short drum ambiences, which really helped liven up a slightly tired snare drum without any hint of comb filtering, or of the unnatural 'barking' quality to which short reverbs are frequently prone. And you can, of course, load your own IRs in WAV, AIF or FLAC format should you need to extend the factory library.

All in all, then, IQ Reverb offers a lot for a relatively modest outlay, and is definitely worth investigating if you're in the market for a third-party reverb to augment those bundled with your DAW. It'll perhaps appeal most of all to those who are used to tweaking algorithmic reverbs to get what they want, and dream of being able to shape convolution reverb in the same free way.

Though it can't work magic, HOFA's IQ Reverb usefully extends the possibilities of convolution at a competitive price.