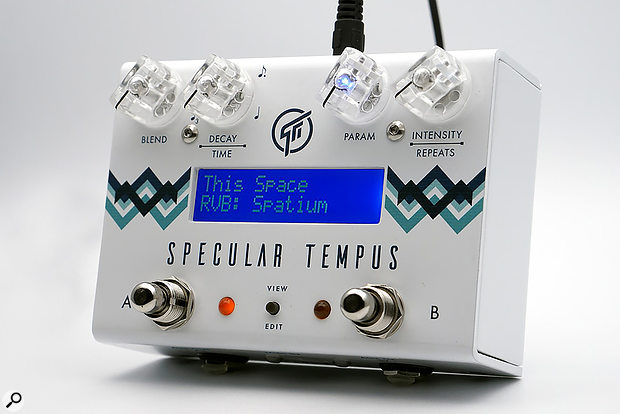 This compact effects pedal could help you inject creativity into all sorts of sources.

To call the Specular Tempus a reverb pedal is to sell it short — really, it falls somewhere between a dedicated reverb or delay pedal and a multi-effects unit, and although its core effects are based on combinations of delay and reverb they're powered by 32 different algorithms. The pedal features 32 presets (four pages of four banks, with each bank holding two presets denoted A and B), each of which can be overwritten. Mono or stereo inputs and outputs can be accommodated, there's a tap tempo capability, and it boasts useful connectivity to other audio processors or external switches — so while this is ostensibly a 'guitar pedal' it's going to appeal to players of other instruments, and possibly recording and mix engineers too. The free Windows/Mac OS SpecLab software can also be downloaded to provide access to an extended set of editing parameters that are not available via the front-panel controls.

Despite the double-switch pedal format, the footprint is only 120 (W) x 90 (D) mm, so it won't take up too much pedalboard space. There are just two footswitches, a View/Edit button and four rotary controls on the front panel, plus a few status LEDs — including blue and orange LEDs that show through the transparent control knobs. A backlit, two-line display shows patch names, the name of the algorithm on which they're based, and the current Page number. In Edit mode, the display shows parameter values and prompts, and the currently selected Bank number is indicated by which of the four knobs is illuminated. To keep purists happy, the dry signal path is analogue, and when changing patches based on the same algorithm the delay/reverb tails continue to play/decay as before. Tap tempo can be set using either the rightmost footswitch or an optional external footswitch, and tempo subdivisions can be specified for each preset. If you opt to use the inbuilt switch for tap tempo you lose access to the patch B slots, so must organise your patches into the A preset lots. A USB port handles firmware updates and allows connection to SpecLab, via which global settings for the pedal, such as switch functions, can be tweaked. 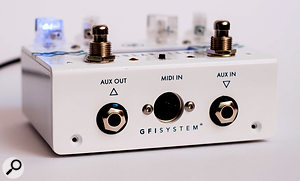 Lots of parameters can be controlled via MIDI, and the Aux In and Out sockets can be used for multiple functions.For integration into more complex systems, the Specular Tempus has a five-pin MIDI In socket. All major functions can be accessed via MIDI, including patch selection, real-time parameter control, MIDI expression pedal and tempo. The Aux In jack can be used with single, dual, or even triple switches for performance control such as tap tempo and bank switching. Aux Out is fed from a switch contact that can be used to switch other equipment — amp channel selection, for example, or boost, reverb on/off, or whatever else happens to be accessible via a switch jack. The Aux In jack can also be used to add an expression pedal, and the pedal may alternatively be configured to incorporate a mono effects loop which can be used to patch other effects pedals into the delay or reverb feedback paths; that opens up a lot of creative possibilities.

A further fun addition is the somewhat dubiously named Auto Knob Swell (stop giggling!). When activated by pressing both footswitches at once, this can be used to slowly ramp up a target control (which can be changed in SpecLab) to its maximum value, hold it there for a period of time, then release it back to its original setting. There are various applications for Auto Knob Swell, though one possibility that comes to mind is to use it to ramp up the delay feedback for dub-style runaway delays. If the Infinite algorithm is in use, pressing and holding both knobs for a second or two activates a freeze loop, providing a sound bed you can play over. 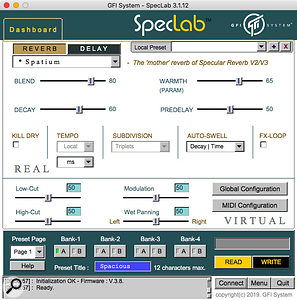 The SpecLab software not only makes editing easier than via the hardware, but it also provides access to more parameters and allows you to store additional presets.There are plenty of reverb algorithms, and they take you well beyond the included rooms, halls, plates and springs into far more creative territory. There are algorithms that incorporate either level or filter modulation, shimmer (octave-up reverb), infinite reverb, anti-shimmer (sub-octave reverb), slow-attack swells and so on, while the delay section comes in digital, analogue and echoes flavours, with a number of unusual treatments based on filtering, formants, spectral processing, pitch-shifting and multi-tap delays. Six of the algorithms combine delay and reverb in more conventional ways but most of the 'speciality' effects use either delay or reverb — not both at once.

The four rotary controls address Blend, Decay/Time, Parameter and Intensity/Repeats. Basic editing uses these knobs after edit mode is entered by pressing the Edit button, but SpecLab makes things easier, as well as providing access to four or so additional parameters. The number of editable parameters is actually still quite limited, but because the various algorithms are so well constructed I really didn't feel I was missing out anywhere. In fact, the presets cover most of the possible options, so tweaking a preset will usually get you where you want faster than starting from scratch.

SpecLab is easy to use and, helpfully, allows you to squirrel away additional patches on your computer to dig up when you need them. You can also use it to restrict the number of presets that can be accessed from the pedal's front panel. This is probably a good plan for live performance, as the only way to select presets from the footswitches is to press both together briefly, taking you to the next bank. The individual switches are then used to select the A or B preset in that bank, but as you can only move 'up' through the presets, if you miss the one you want you have to cycle through the whole lot to get back to it. New presets are not loaded until you make the final switch press, so you can navigate to the bank holding the preset you want to bring up next and then keep playing the existing preset until you hit the A or B footswitch to load in the new one.

I have to say that this pedal sounds sublime — it can stand toe-to-toe with the big boys any time.

SpecLab doesn't display a full list of what's in the pedal slots. That would have made navigation easier than it is, but on the whole it's very straightforward. You need to be aware that when you ask it to load a patch from the pedal, it loads the one selected on the SpecLab screen, not the preset currently selected in the pedal itself. An option to sync to the current pedal patch (as many other editors do), would have been useful. 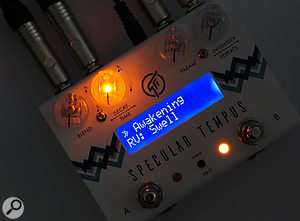 The front-panel knobs light up in different colours to indicate the currently selected bank of presets.I have to say that this pedal sounds sublime — it can stand toe-to-toe with the big boys any time. The reverbs are lush and spacious, with a huge sense of stereo width. The delays cover all the bases, including emulations of slightly wobbly vintage tape echo. And most of the 'trick' effects are musically satisfying and well executed. For example, the shimmer delay has no obvious pitch-shifting artifacts, the slow swell reverb is warm and smooth, and those delay effects that treat the delays to pitch-shifting or resonant filtering work perfectly. It's also possible to set up some lovely tremolo reverbs. Indeed, there's very little that's too gimmicky to have a serious musical application. A Dry Kill option, programmable per preset, is available for use in a mixer aux send loop, or for use with Swell effects, and with the Freeze facility you can conjure up some lovely pad-like beds. If you want reverb and delay simultaneously the options may be more conventional, but they're no less rich-sounding.

If you just need a bit of echo or reverb occasionally, this pedal is almost certainly overkill — but for those of a more ambient persuasion, it should be a perfect fit. While marketed primarily as a guitar pedal, there's no reason at all not to use the Specular Tempus with keyboards or acoustic sound sources, and it would also make a versatile studio tool for tracking or mixing. I really enjoyed playing with it and found most of the effects inspired me to keep playing — always a good sign. Finally, this pedal costs a bit less than its most obvious competitors, so if you want a delay/reverb pedal you can really lose yourself in, the Specular Tempus has a lot to recommend it.

There are many reverb and delay pedals out there, but few of this quality. The main competition comes from the Boss RV‑500, Strymon Blue Sky, Source Audio Ventris and Neunaber Immerse, though most of these offer only one type of effect per pedal. There's also some overlap with Eventide's H9 and Mooer's Ocean Machine reverb/delay. Keeley's Caverns reverb/delay and the Seymour Duncan Dark Sun also offer both reverb and delay, though these focus on more conventional delay and reverb treatments.

I've created some audio examples to give you a better feel for this pedal's sound. You can play the embedded SoundCloud MP3 tracks, or download a ZIP file of hi–res WAV audio examples in the righthand Media sidebar or use the link below.

This is one of the richest-sounding reverb/delay pedals I've tried and should appeal to anyone in search of ambient or immersive sounds.