In the LS3, Graham Audio have sought to recreate a classic BBC monitor but without the 'classic' price tag.

I was idly reading posts in the SOS Forum a little while ago and came across a contributor bemoaning the lack of compact, inexpensive, closed‑box, passive nearfield monitors. Well, I have good news... 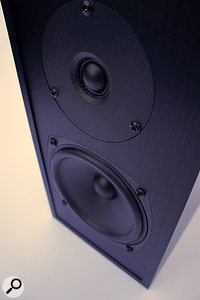 We've reviewed a couple of Graham Audio monitors in Sound On Sound in recent times and admired them both. The first was the Chartwell LS3/5, a reboot of the original and famous BBC LS3/5(A) compact monitor. The second was the Graham Audio LS6, a new design but one very much influenced by the traditions of classic BBC style monitor design. Graham Audio's specialism in BBC‑stye monitors is no great surprise, seeing as the designer behind the Graham speakers is Derek Hughes, son of BBC speaker engineer Spencer Hughes. The speaker in question here, the Graham Audio Swisstone LS3, is essentially the same size as the LS3/5, but the cabinet is turned through 90 degrees so that it is narrower and deeper. Graham Audio's expressed intention with the LS3 is to create a monitor that provides 90 percent of the performance of an LS3/5(A) at around 60 percent of the cost. The 'Swisstone' name chosen by Graham Audio for this speaker is a nod to the company of the same name, who owned the Rogers and Chartwell brands in the 1970s and 1980s.

If there are categories for monitors, the LS3 falls into the plain, no‑frills one. While there are options for gloss painted or real veneer finishes, monitors don't get much more unassuming than the entry-level LS3 submitted for review. It's a black, wood‑effect, vinyl‑finished MDF enclosure carrying a 120mm‑diameter bass/mid‑range driver and a 19mm dome tweeter on its front panel, and a pair of connection terminals on its rear panel. The enclosure is constructed in line with the damped thin-wall principles developed by the BBC in the 1970s. A black fabric‑covered grille is magnetically attached to the front panel. As physical descriptions go, that's one of the shortest I've ever managed in a review, but there really is very little else to describe.

One slightly unusual thing about this speaker is that it will be available for purchase directly from Graham Audio. The principle here is clearly one of eliminating the retailer margin, and direct distance selling is of course something we're all doing much more of these days. I'm in two minds about it where speakers are concerned, however, be they hi-fi products or pro monitors. I can see the huge advantage for the manufacturers in terms of hitting more competitive price points, and for end users in terms of getting more monitor for the money, but a speaker or monitor purchase will always have an element of personal preference about it that can only really be appreciated in the flesh. Having said that, I think that anybody who takes the plunge with a pair of LS3s will be pretty satisfied — but I'm getting ahead of myself slightly, as there's a little more to unpick about the design of the LS3s before I get on to how they perform.

The two drivers of the LS3 are a 19mm fabric‑dome tweeter manufactured by SEAS in Norway, and a custom‑designed,130mm‑diameter, thermoplastic‑diaphragm bass/mid driver, from an unspecified manufacturer. The bass/mid driver is effectively a modern interpretation of the classic KEF B110, as used in the original LS3/5(A) and countless other speaker designs over the decades.

The drivers are integrated by a relatively complex passive crossover network that owes much to the LS3/5 design, and it's here that a good part of Derek Hughes' know-how and experience comes into play. You see, the crossover network in a passive speaker not only divides the audio bandwidth between the drivers but, given the electro-acoustic performance of the drivers in their enclosure, also provides the only opportunity for any tonal balance 'voicing' to be implemented. Designers of contemporary active monitors, those perhaps blessed with powerful DSP engines, can indulge in almost limitless response tweaking to compensate for driver limitations or the effect of speaker dispersion on the far-field tonal balance. Designers of passive monitors have no such opportunities, and voicing through fine adjustment of the crossover network is a real skill — and, sad to say, probably a dying art.

Talk of voicing brings me to describing what I found when I fired up FuzzMeasure and undertook a few response measurements of the LS3. Diagram 1 (created by compounding a close-mic LF measurement with a 0.75m mic mid/bass measurement) shows a reasonably tidy and linear basic frequency‑response characteristic, with low‑frequency bandwidth extending to just above 80Hz at -3dB. The roll-off thereafter is, as is to be expected for a closed‑box speaker, a gentle 12dB per octave. The LS3's low‑frequency bandwidth and roll-off is similar to the Yamaha NS-10.

Diagram 1: The axial frequency response of the LS3, without grille, from 20Hz to 20kHz.

One characteristic that slightly surprised me was the rising response above 15kHz. However, in the grand scheme of things it's probably not that significant: partly it will reduce quite quickly off-axis, and partly, at such high frequencies, it's unlikely to have much influence on mix decisions. Ignoring the minor localised suck-out at 3.5kHz (probably a crossover artifact that will be highly sensitive to the position of the measurement mic), the LS3 is flat on axis to within ±1.5dB between 120Hz and 15kHz.

I expected the LS3's rising response above 15kHz to be moderated by fitting the grille but, as illustrated by Diagram 2, I was wrong. The frequency response with the grille fitted is not quite so tidy as without because, along with the HF attenuation cause by the fabric, the grille frame introduces some diffraction edges. One interesting effect of the grille seems to be to introduce a 1dB lift in the response centred around 1kHz. This is caused I think by the grille edges running quite close to the side of the bass/mid driver, creating a slight horn-loading effect. That 1dB lift is likely to be more significant in terms of mix decisions than the 15kHz feature. Most of the listening that I'll describe a paragraph or two down was done with the grilles removed.

The last FuzzMeasure curve, Diagram 3, shows the low‑frequency group delay and serves to confirm the LS3's typically closed‑box character. Its group delay figure of around 4ms at 50Hz is very low. Again, the NS-10 is very similar.

So does the Swisstone LS3 achieve 90 percent of the LS3/5 at 60 percent of the cost? I didn't have a pair of LS3/5s to compare directly, but once I'd put FuzzMeasure away and started listening to my favourite CD (and vinyl) material, along with familiar Pro Tools sessions, right from the start it was apparent that the LS3 is a very capable little monitor. The fundamental quality of the BBC LS3/5 (and LS3/5A) has always been just how well it reproduces the tonal quality and dynamic nuance of voices and acoustic instruments, and to my ears the LS3 displays a very good dose of the same seductive character. I don't want to stray towards hi-fi review language and hyperbole but the LS3 has a clarity and natural tonality to its reproduction of voices in particular that is hugely satisfying, and perhaps more importantly in a mix context, extremely revealing of vocal microphone character and plug-in processing.

The LS3 would actually make a convincing case for itself based on only its mid‑range performance, but it is also nicely balanced throughout the entire audio band without obvious emphasis, and its bass, while clearly not hugely extended in terms of bandwidth, has all the timing accuracy you'd expect from a closed box. Stereo imaging too is explicit and focused, and the tweeter displays a good level of detail without drawing attention to itself. There's no getting away from the fact that the LS3 is a very small monitor, and is relatively limited its ability to play at high volume levels (although I suspect it's better than any original LS3/5‑style monitor in that respect), so if your need is for something that will work for EDM, you'd do best to look elsewhere. But if your needs are for compact monitoring that's at home with small‑scale classical, gentle indie or electro-acoustic folk, then the LS3 has a great deal to offer.

We're not hugely blessed with passive monitors around the LS3's price, but there are a couple of options. Firstly, if you want something that's about as far from BBC‑style monitoring as it's possible to get, there's the Avantone Pro CLA-10. Secondly, a little more expensive (and not strictly closed‑box) but still perhaps within reach are the PMC TB2S+ and Amphion One12.

The LS3 might be old-school and plain to look at but it suits its particular niche extremely well. If your monitoring needs sit in the same niche, the LS3 makes a really strong case for itself.