In Session Audio Riff Generation | Outside In Edition

I reviewed In Session Audio's original Riff Generation title in the SOS December 2018 issue. The package managed to combine a number of familiar concepts — a library of predominately synth-based sounds, pattern-based sequencing, creative effects, flexible randomisation options and adaptive key/scale matching — into an elegant user interface to deliver something that was very much greater than the sum of its parts. In particular, the combination of the last two of these features meant the 'generation' bit of the library's title was very apt; this was an instrument that could generate some inspiring, pattern-based, musical ideas, often with a hypnotic quality that would work in all sorts of electronic music styles or soundtrack creation. 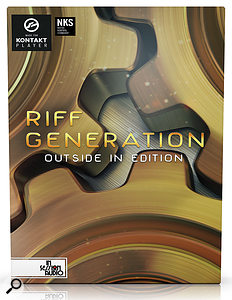 In Session Audio have now released Riff Generation Outside In Edition. It is built around the same UI (as covered in the original review) but with a different sound set and including some engine tweaks introduced since the original title first appeared. The 'Outside In' label indicates the origins of the new sounds. All of these are totally new and derived from 'real' acoustic and electronic instruments rather than created from 'in the box' sources. These include vibraphones, xylophones, acoustic and electric guitars, pedal steel, bass, cello, bells, pianos as well as a number of hardware synths. Again, the emphasis is on sounds with a shorter duration and there are many with a percussive nature, allowing you to easily create a rhythmic element within your sequenced patterns.

In terms of the engine itself, In Session Audio have taken advantage of new reverb and delay options built into Kontakt 6, so the effects section now offers you some additional creative choices. However, perhaps the most significant change — and one that I noted on my own wish-list in the original review — is the ability to divide the 256 pattern steps available into eight shorter 'scenes', with key-switching between them on the fly. This instantly makes the instrument easier to use in a compositional context. It is also useful to be able to copy/paste between scenes as you experiment, so you don't lose a good idea from further use of the various generation options.

If you liked the original Riff Generation, then you will undoubtedly also like the Outside In Edition. No, it's not cheap, but it sounds fabulous, is undoubtedly inspiring, and is also a lot of fun to use.

I have to say I think the new sounds are excellent and, as an alternative to the synth-dominated sounds of the original release, bring a more organic feel to patterns you create. For example, when used together, the various guitar harmonics and palm-muted sounds can create some beautiful, haunting atmospheres within the right pattern. Equally, the sub-set of percussive sounds mean you can add an additional rhythmic element to your sequences. If you liked the original Riff Generation, then you will undoubtedly also like the Outside In Edition. No, it's not cheap, but it sounds fabulous, is undoubtedly inspiring, and is also a lot of fun to use. Well worth exploring.