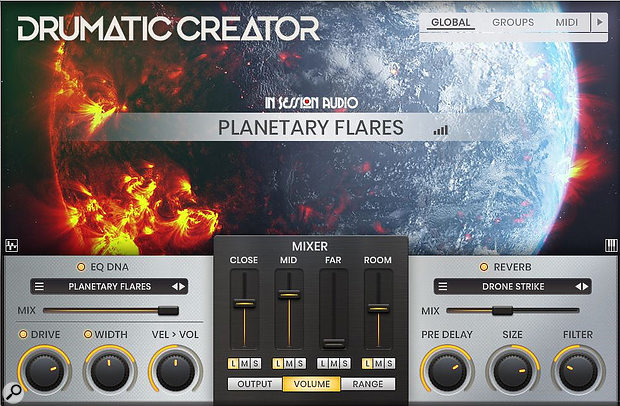 Developing upon the concept introduced as Taiko Creator, Drumatic Creator once again maxes out the membranophones in this sibling library. Deeply sampled percussion nestles in a fiendishly clever Kontakt engine that allows the user to design their own percussion ensembles down to the finest detail. The percussive focus of Drumatic Creator moves away from the Taikos of Japan to a more general cinematic approach. In Session's original idea was for a definitive tom-tom library; however, the brief grew to include a wider range of instruments. The final sample pool contains 40 drums ranging from bass drums, toms, surdos, Rototoms, tenor toms, frame drums and snares. These are complemented by 56 rim hits, wood and metal percussion and 97 sound design elements — big booms, atmospheres, metallics, unnerving mechanical effects, rubbed skins and cymbals. All skin-beaten drums have seven velocity layers and seven round robins: percussion has five velocity layers, whilst the sound design elements are single-layer samples.

Sounds are spread across the keyboard in nine drum Groups and six percussion Groups, each of which can be populated with up to nine instruments at once; two additional Groups contain nine sound-design elements apiece. Each drum and percussion Group is assigned to two keys (for easy two-handed playing) whilst the sound-design Groups are assigned one sound per key, spanning one and a half octaves from C4 upwards. 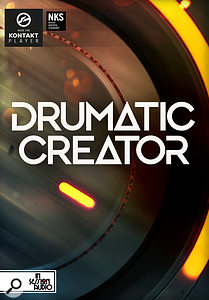 Very little effort is required to get stunning results straight out of the box; 10 ready-to-play preset kits are provided as snapshots, and if you're needing instant rhythmic gratification, Drumatic Creator has just the solution. Enthusiastic virtual drummists are unlikely to be seduced by the content of most pre-programmed MIDI groove libraries, but those provided in the Creator instruments are sensationally good, and I wouldn't hesitate to use any one of them.

They are presented as a Song Suite for each of the 10 kit presets. Each suite comprises 4/4 and 3/4 variations, giving a total of 20 suites. These can be auditioned within Drumatic, and individual patterns dragged into your DAW. There is also a folder of complete suites with high, low and full ensemble patterns all arranged into song-like structures that can be dragged to your DAW, chopped up and rearranged as required. There are even some 4/4 triplet, 5/4 and 6/8 suites included amongst these for good measure. At the time of writing, In Session Audio plan to expand Drumatic with a further 10 kit presets with their attendant MIDI suites — these may already be available by the time this review goes to print.

Global adjustments for each kit include close, mid, far and room mics with adjustable mix, solo, mute and purge — the latter being useful for keeping the voice count down when the going gets tough on smaller systems. Mics can also be delayed relative to each other, further adding to the impression of distance when applied to the ambient mics. They can also be routed to individual outputs. Two EQs are provided: EQ DNA is a parallel EQ based on 22 convolution impulses, while the 'main' EQ employs Kontakt's Solid-G EQ, offering four parametric bands plus low- and high-pass filtering. There are controls for Drive (saturation), stereo width and overall velocity response, and finally a convolution reverb with a choice of 20 impulses.

Building kits on the Group page is where the fun starts. This can be done entirely manually, where you select instruments to populate as many of each Group's nine slots as you wish, setting their relative volumes, pan and tuning. Alternatively, you can let Drumatic do the donkey work for you using its Group Creation randomising feature. Set the required number of instruments, their size, pitch randomising and panning, click Create Group and Drumatic does the rest. If you don't like its choices, keep clicking until something pops up that appeals — you can fine-tune the results manually. If you want a matching Rim Set based on any Group's selection of drums, Create Rim Set does exactly that. No two randomly generated kits will ever sound the same, so you'll never be stuck in a sonic rut with baked-in sampled ensembles.

There seems to be nothing that In Session Audio haven't considered in the design — I'd venture to say it's a work of genius.

Drum and percussion Groups also include optional high- and low-pass filtering/shelving, with sound shaping via Attack and Release controls. Mic volumes can be offset from the global setting, allowing for individual distance placement for each Group: for example, favouring the snare Group's close mic would bring it forward, or you could push it back by favouring the room and far mics. One remaining feature that sets Drumatic apart from your average percussion library is the Unity control. If set to zero, all drums in a Group play as a single monolithic, layered drum. Turn up the Unity, and their timing begins to spread out — suddenly it's an ensemble, and it sounds huge. Unity amount can be either be set individually per Group, or globally for the entire kit. Individual settings are best for creating the impression of players with varying degrees of timing accuracy.

There's no denying that heavily layered Groups with all mics blazing can place a heavy burden on a modest system. However, even when you rein back the layers and purge a couple of mics, Drumatic still sounds mightily impressive. You can always render to audio if things get too much for the CPU. There seems to be nothing that In Session Audio haven't considered in the design, and I'd venture to say it's a work of genius. Drumatic offers a potentially 135-strong drum ensemble (plus the sound-design elements) that can be configured and customised in virtually infinite ways. If that doesn't go to make some thunderously apocalyptic soundtracks, I don't know what will.