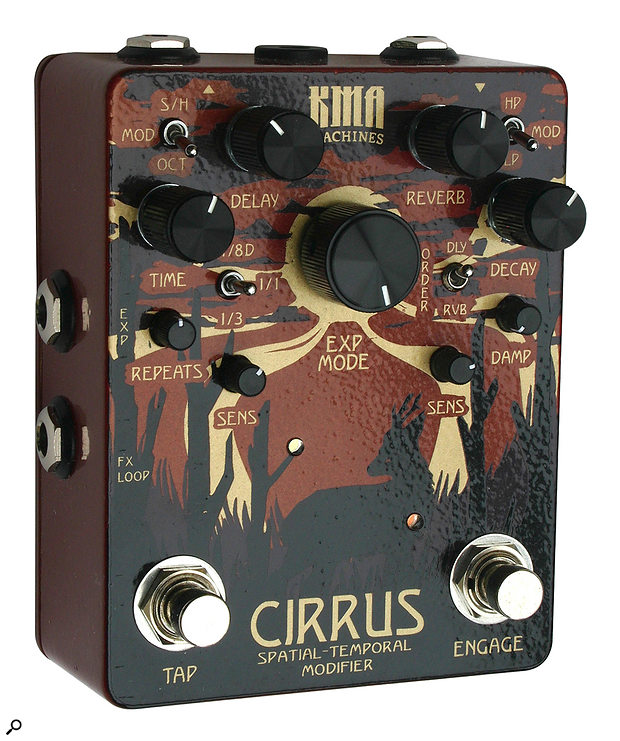 KMA Audio Machines had the idea of combining delay, reverb, dynamic modulation, dynamic filtering, sample & hold modulation and octave shimmer in a single box, and the result is the mono-in, mono-out Cirrus pedal, which is their first digital pedal. Well suited to ambient music, the effects on offer can be crafted to fit in with virtually any genre, and if the nine knobs, four toggle switches and two footswitches found on the top panel don't satisfy your needs, there are also jacks for a serial effects loop (pre- the reverb and delay) and for an external expression pedal or slider. There's no PSU included, so you need a 9V DC supply capable of delivering at least 220mA.

The left-hand side of the pedal is given over to delay controls, which allow you to dial in a maximum delay of 1.5 seconds. There are the usual controls for delay time, level and feedback, as you'd expect, but there is also a sensitivity control for use with dynamic modulation, a three-position divisions switch for use with the left-hand tap-tempo footswitch, and a further three-way switch for selecting between Sample & Hold (filtering), Modulation or Octave. Note that the sensitivity controls have a slightly different function depending on which modulation type you have selected. On the delay side, the sensitivity control becomes a fade-in time control when Shimmer is selected, while on the reverb side it only serves as a modulation depth control in the Mod position. In the two filter positions, it sets the start frequency of the envelope-controlled filter.

Sonically, this pedal can do a lot and its controls operate very smoothly.

On the right of the pedal, the reverb section has controls for reverb level, decay time and damping, plus another sensitivity knob for controlling dynamic modulation. One of the toggle switches sets the connection order of the delay and reverb sections, and the other allows you to choose high-pass filter, low-pass filter or modulation, all of which respond dynamically to the input level. In the centre is a large rotary switch knob that selects the function to be controlled by an external pedal — any of the knob functions other than effect level can be manipulated in this way. The right-hand footswitch is used to engage the effects, and even the footswitches have secondary functions!

When the bypass is off, you can engage the pedal momentarily by holding the switch down, and this also maxes out the reverb decay time. Holding down the tap-tempo switch produces infinite echoes. An internal dual DIP switch selects whether or not the signal is sent to the Reverb/Delay in Bypass with the second switch selecting hard bypass Reverb and Delay trails. Auditioning the reverb in isolation, I'd describe its quality as adequate rather than exceptional, but as it will be often be used as part of a composite effect, that isn't too serious a criticism. The delay, on the other hand, sounds lovely, with an analogue-like 'murkiness' to the repeats.

Cirrus is easy to find your way around. Some way of storing presets would have been useful, purely because there are so many useful options, and in the studio, having only a mono output could prove a bit of a limitation for some. But on the whole I have no real complaints. Sonically, this pedal can do a lot and its controls operate very smoothly — so if you vary the delay time, it sounds the same as changing the tape speed on an old-school tape echo. In combination, the reverb-plus-delay format teams up with the various modulation options to deliver you to hippy paradise. If you are into floaty minimalism, this is one pedal definitely worth checking out.