Guitar Swell is a Kontakt instrument that can run on either the free Kontakt player or the full version. The guitar samples themselves are recorded with a natural attack so either a virtual volume pedal or an ADSR is used to create pedal swell effects. An interesting twist is the addition of a strummed Custom Chord section, where each snapshot can host 12 custom ‘one finger’ chords set up via a six‑string interface that supports pedal‑steel‑style transitions to new or modified chords allowing for glide effects, the timing of which can be set manually, made to follow divisions of the song tempo or performed using a bend wheel. Add in the effects section and the option to control the virtual swell pedal via MIDI and you’ll find there’s a lot of scope for soundtrack and ambient‑style sounds. 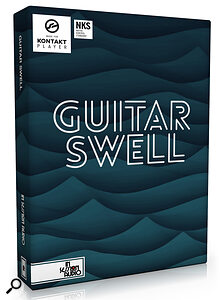 In Session Audio Guitar Swell sample library.Each of the factory snapshots, which you can think of as sound presets, loads up a different combination of instrument and effects as well as their control settings and Custom Chord setups, the latter being played using MIDI notes C0 to B0, which fall below the normal play range of the instrument.

The snapshots are arranged into two sections designated Player and Ambient Swells. Player snapshots produce more recognisable guitar sounds while Ambient Swells uses envelope shaping and sound layering to create pad‑like textures. The G‑1 and A‑1 keys are used as switches to change the play mode from Free Play to Auto Chord so that playing notes in the normal playing range of the instrument, C1 to C6, produces chords that follow user‑selected Key, Scale and Chord settings.

The Extra sounds include not only guitars but also tuned percussion such as Wurli and vibraphone, hand bell, singing bowl, bowed xylophone, ocarina and some synth‑like shimmer sounds that were created using premium pedals. In the Guitar section are controls relating to the Chord Transitions and for adding LFO vibrato, with a variable fade‑in time, while clicking over to Extra reveals transpose and resonant filtering for the layered sound.

In the Custom Chords section, I felt most comfortable controlling chord transitions from the mod wheel and you can create some truly lovely effects using this feature.

To my ears the raw guitars sound more like electric pianos than real guitars but, maybe that’s missing the point as these are extremely usable and musical sounds in their own right. Engage Auto Chord with a slower strum speed and the effect is almost harpsichord‑like. In the Ambient Swell selection, there are some lovely ethereal pad sounds to be had that blur the lines between guitar and synth.

In the Custom Chords section, I felt most comfortable controlling chord transitions from the mod wheel and you can create some truly lovely effects using this feature. Guitar Swell is an instrument with a lot of scope for experimentation yet it is easy to use, so although it won’t replace your guitar player, it will help you produce a wide range of evocative sounds that might inspire you to take your compositions in a new direction.