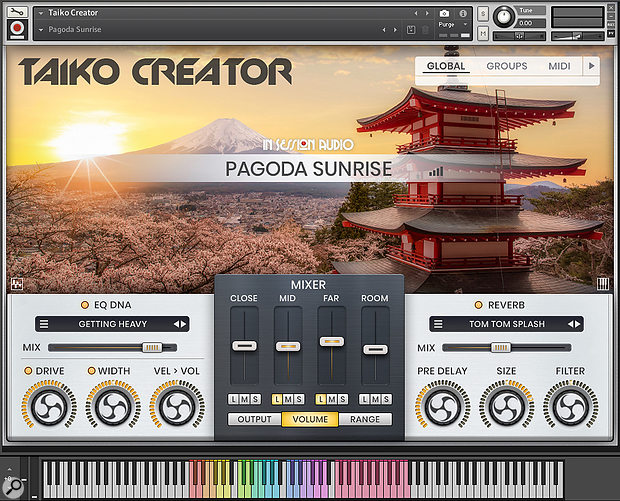 The Global page, with the default Pagoda Sunrise snapshot preset loaded. As shown by the colour-coded keyboard mapping, each of the nine 'drum head' Groups is assigned to a pair of neighbouring white keys. The six 'rim/stick' percussion Groups occupy adjacent pairs of black keys immediately above or below these. The upper key range (C4-F5) plays Auxiliary sounds (gongs, cymbals, etc) divided into two Groups of nine.

If your thunderous cinematic percussion is getting out of control, you need Taiko Creator.

Following in the footsteps of their ingenious and eminently useful Shimmer Shake Strike (reviewed SOS December 2018 issue), In Session Audio have hit the nail on the head again with Taiko Creator. Thunderous percussion ensembles are the staple of (but of course not restricted to) any action-packed movie or game score. No surprise, then, that Japanese taiko drums are synonymous with this approach to heavy percussion. They range from intimidatingly huge (the world's largest in Akita, Japan, is 4.52m long, has a diameter of 3.8m and weighs 3.5 tons) to small hand-held jobs less than 12 inches in diameter.

Twenty‑four drums, ranging from very large to small, plus additional percussion, were sampled for Taiko Creator (henceforth TC). The key factor that sets TC apart is that, unlike many similar libraries where the constituents of the ensemble are 'baked in', TC allows you to choose exactly how many drums make up your ensemble, and also which ones they are. The depth and detail of customisation is nothing if not comprehensive, so hang on to your hats...

The Out Of The Box Experience

For instant gratification, the obvious starting point is to explore the snapshot presets. On loading TC, it defaults to the Global page and the Pagoda Sunrise preset. Each snapshot has its own sumptuous graphic background — indeed, the whole visual impact is impressive, with large, friendly controls and reassuringly big fonts. Music software is not just the preserve of eagle-eyed 12-year olds — plenty of old farts like me use it too, so it's a pleasure not to have to reach for the reading glasses. Each snapshot contains a different combination of instruments, always maintaining the same keyboard layout: nine groups of 'head hit' percussion on adjacent pairs of white keys; six groups of 'sticks, rims, wood and metal' percussion on adjacent pairs of black keys; and two groups of nine Auxiliary percussion instruments spread across 18 keys from C4 to F5.

After test-driving each snapshot with an exploratory thump up and down the keyboard, it's well worth jumping straight to the MIDI page, which hosts a library of pre-programmed patterns. Organised into 'song suite' folders, these are designed to work best with snapshots of the same name; two folders of different time signatures are provided for each suite, each containing a selection of intros, core patterns, fills and endings. They can be further modified with half‑, normal‑ and double‑speed options, making them usable at practically any project tempo, and a velocity knob to adjust the intensity of the pattern. Simply click the MIDI button to drag and drop the patterns (including any speed or velocity adjustments) into your project. I'd normally shy away from pre-programmed rhythmic offerings, but these have a great authentic feel, as well as being an excellent way to hear what TC sounds like in full flight. Regular and Expanded versions are available; the Expanded version doubles the number of snapshots to 20 and the number of MIDI song suites to 40, and (at the time of writing) is free to anyone who bought TC prior to the Expanded version's release.

In the central Mixer panel, Close, Mid, Far and Room mic levels include the customary mute, solo and load/purge buttons, with individual output routing options for each mic. In addition, there is a Range button; selecting this transforms each mic's fader into a delay control, enabling you to add up to 40ms delay, simulating the difference in time it takes for the sound to reach more distant mics. If you do want all the mics to 'speak' instantly, the option is there. However, adding progressively larger amounts of delay on the Mid, Far and Room does make for a more natural sound, as well as enhancing the impression of hugeness. Also impressive is how radically different the mics sound from each other. From the crispness of the Close mics to the thunderous quality of the Room set, there's huge tonal variety on tap just with these four faders. A word of caution, though — if you're running TC on a system of limited capability, when playing any of TC's particularly fast, energetic MIDI patterns (I'm looking at you, Hiroshima Castle) the voice count for just one mic can easily get up to the 400 mark. Each additional mic will add another 400, so it may be necessary to restrict yourself to one mic, or two at the most. I'd recommend Close + Far, or Close + Room — either combination sounds great. It's also worth noting that the Auxiliary percussion groups are not affected by the Mixer, as they use a completely different mic setup of their own. The Auxiliary sounds will be discussed later.

TC includes two global EQs; firstly, the intriguingly titled EQ DNA is a collection of 10 convolution-based presets, apparently created by referencing drum passages from famous movies. A Mix fader adjusts the amount of effect added to the sound; I found the colouring effect of these EQs was best appreciated with the mix level at 100 percent. The second EQ is rather hidden away, its panel accessed via a tiny icon lurking in the bottom‑left corner of the background photo. It's actually Kontakt's Solid G-EQ, a very capable four-band affair with additional high-pass and low-pass filters. Next we have Drive (a tape simulation using compression and saturation), overall Stereo Width, and a Velocity to Volume sensitivity control. Lastly, a convolution reverb provides 20 well-chosen impulses, with pre-delay, size and a bidirectional high‑/low‑pass filter.

One final neat Global feature that could easily go unnoticed is what looks like a grey mobile phone signal strength indicator, just to the right of the snapshot name. In its grey state, TC responds to velocity as normal; clicking it repeatedly cycles through yellow, orange and red, adding 1dB, 2dB or 3dB of volume respectively to any 'hit' whose MIDI velocity reaches 127 — instant 'oomph' for when the action hots up.

Deep‑level customising of the ensemble takes place on the Groups page. Groups are selected automatically from the keyboard when 'Select Group via MIDI' is turned on, making navigation a breeze. At the simplest level, you can edit existing groups by adding, removing or swapping out individual drums, adjusting each drum's panning, volume and tuning; you can even audition, solo or mute specific drums within a Group. 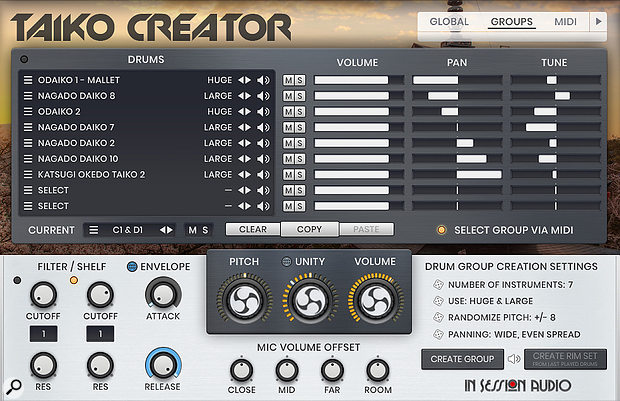 The Groups page, where kits are created and edited either manually, or using the Drum Group Creation tools that randomise instruments according to specified parameters, or a combination of both methods. The lower panel settings are unique to each Group, offering maximum flexibility.

The Groups page's lower panel offers further sound‑shaping options; its settings reflect the currently selected Group, and are unique to each Group. On the left are two Filter/Shelf controls, one for high-pass and one for low-pass. Each offers a choice of 1, 2 or 4-pole resonant filters, or high-/low-frequency shelving. Attack and release envelope controls are self-explanatory — the attack control is restricted to a sensibly narrow range, preventing the maximum setting from being so slow that sounds have disappeared before they've had a chance to speak. It's an effective way of taking the edge off sounds without filtering or EQ.

If you want to place certain Groups within your ensemble at different distances, you can, thanks to TC's very thoughtful inclusion of Mic Volume Offset controls. Depending on which mics you have active on the Global page, you can adjust the balance of them here for each Group, so if you want in-your-face large drums and distant, back-of-the-room rim hits, it's just a couple of tweaks away.

Nestling between the master Pitch and Volume knobs for each Group is a Unity control. This determines the timing 'spread' of drums that make up each Group. The higher the value, the looser they play — having varying Unity settings for different Groups really adds to the sense of human realism and size. Whilst TC sounds most effective with judicious amounts of Unity spread, you can also combine a Group's drums into one big composite by setting its Unity to zero. Both the Unity and attack controls share an additional feature: 'global' buttons. For any Groups where these are active (blue), any changes to their values will be copied to all other Groups whose global buttons are also active. When inactive, those controls retain their own individual settings.

A Roll Of The Dice

Although you can create your own ensembles by hand-picking, tuning and panning drums one by one, it's not the most time-efficient way to go about it. TC's Drum Group Creation tool speeds up the process by doing the hard work for you. Select a drum Group, then specify the number of drums you want, their sizes, the amount of pitch randomisation, and stereo spread. When you've made your choices, click Create Group, and voilà, it's done. If you don't like TC's randomisation choices, keep clicking Create Group until you're happy with the result. TC can also create a matching rim set based on the instruments that make up the last played drum Group — now that's a clever touch. You can also alter individual aspects and then randomise them by clicking on their small die icons.

Two Auxiliary Groups, each comprising nine instruments, bring further colour and drama to the table. Unlike the Drum and Percussion Groups, there is no automated Group creation tool — these have to be edited or created manually. There are 74 sounds to choose from, including atmospheres, tam tam, booms, gongs and cymbals played in multiple ways, finger cymbals, and a selection of guttural vocal utterances. It's a useful bonus collection of sounds in its own right, and very effective for (as the manual puts it) 'glueing' everything together.

The Auxiliary Groups' lower panel; each of the two Groups contains nine sounds, assignable from a total of 74. Sound selection, volume, panning and tuning of each sound is done manually in the upper panel, whilst attack, release, sample start and reverse playback are set in the lower.

For these two Groups, the lower panel takes on a different format; the nine instruments of a Group each have attack and release controls; samples can be reversed; and the sample start times can also be 'cut in' too: especially useful with reversed samples to avoid any periods of near silence at the samples' ends.

Heavy percussion libraries, with and without taikos, are not thin on the ground — many sound superb, and arguably that's all that matters. Taiko Creator is a match for the best of them, and does the job in style, bringing the added pleasure of creating exactly the ensemble you want, tailor‑made for each situation. It's hard to think of anything In Session Audio haven't thought of — it's a top-notch library, and as far as this KSP dunce is concerned, a triumph of scripting and user-friendly design.

Libraries such as 8dio Epic Taiko Ensemble, Evolution Series World Percussion Taiko and Spitfire Hans Zimmer Percussion run in Kontakt, and fulfil the thundering drums brief well, although none offer the same finely detailed customisability as Taiko Creator. Strezov Sampling have a free taiko instrument that runs in the full version of Kontakt, appropriately named X3M Taiko Freebie. It's limited in scope, but worth a download if you urgently need some heavy tub-thumping that keeps the credit card happy.

Creating thunderous percussion ensembles has never been so much fun, or so sonically flexible. If you're frustrated by the 'baked in' philosophy of similar libraries, Taiko Creator frees you up to create your own custom ensembles, from the very small to the intimidatingly huge.