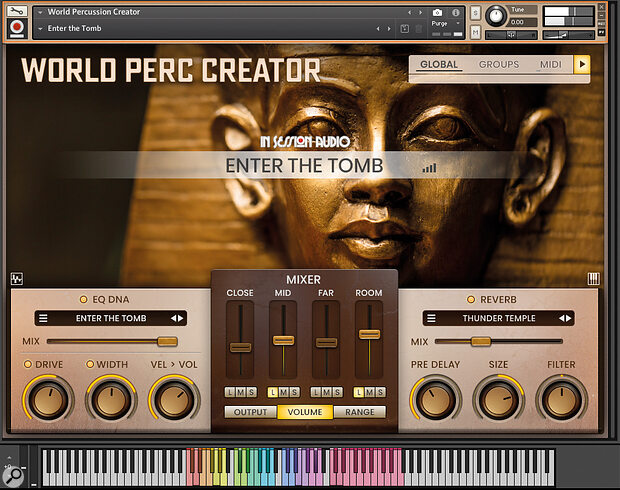 Nick Magnus reviewed In Session Audio’s Taiko Creator and Drumatic Creator in the May 2019 and June 2020 issues of SOS respectively. The company are now back with a third instalment of the ‘Creator’ series — World Percussion Creator — and, given just how impressed Nick was by the first two titles, the bar is set very high.

As the title suggests, the emphasis here leans more towards percussion but there are still plenty of drum sounds included to provide a complete sound palette for creating ethnic rhythms. Sampled instruments therefore include bass drums, cajon, congas, darbuka, djembe, dunun, frame drums, snares, surdo, udu, agogo, clave, pulli, rattle, tambourine, woodblocks and a whole list of others. As with the other titles in the series, these core sounds are supplemented by a collection of sound‑designed and auxiliary elements spanning booms, slams, cymbals, chimes and various others. Individually, the sounds are absolutely top‑notch and, with seven velocity layers and seven round‑robins at each velocity layer, there is plenty of scope for a realistic and dynamic performance.

Nick described the underlying Kontakt‑based engine in some detail when reviewing Taiko Creator, so I’ll not dig into the details here other than to say that, spread across the three main screens — Global, Groups and MIDI — it integrates a very powerful and flexible feature set into a user‑friendly and intuitive user‑interface. The ability to design your own ensembles (and sub‑groups within them), as well as options to humanise the performances at a group level, are brilliantly executed.

As with previous releases, you can choose to purchase the ‘core’ version (with 10 kits and 20 suites of MIDI grooves) or a version with expansion packs that triple the number of kits and grooves. For the purposes of the review, I had access to the expanded version, and it’s an impressive array of sounds and MIDI patterns to explore. With the ability to reassemble the sounds into your own custom kits, and easy MIDI drag and drop to create new patterns within your MIDI sequencer, there is plenty of mileage to be had.

World Percussion Creator is a fabulous option for media composers, delivering top quality sounds in a UI that is superbly designed.

Each of the preset kits loads up with a custom background graphic, and the references to ancient civilisations and wildlife give a strong suggestion of the sonic direction In Session Audio were aiming for. That said, there is a huge palette of sounds here, and while trailer composers might prefer Taiko Creator, World Percussion Creator is immensely flexible; it can easily go from delicate to bombastic.

There are some sample library/virtual instrument developers who just seem to always be on the top of their game. Having used a number of their products over the last few years, I’d certainly put In Session Audio within in this group. World Percussion Creator is a fabulous option for media composers, delivering top‑quality sounds in a UI that is superbly designed. Given what’s on offer, it is also very competitively priced. Highly recommended.