After my foray into the IO‑Instruments box that landed on my doorstep some weeks ago (see SOS September 2020 issue for a review of their Himalia module) I was excited to try more. IO‑Instruments seem to be on a mission to make practical modules with a large dose of character, which is evident not only in electronics but in design. I can imagine a rack full of IO‑Instruments would be a pretty sight indeed. 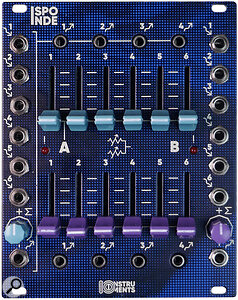 IO-Instruments Sponde: 20HP, +12V 90mA, -12V 82mA.The Sponde is a 12‑channel mixer in 20HP. The channels are grouped into two groups of six and each mixer channel has a mono input jack and a gain fader which ranges from silence to +6dB. The two groups of six each have their own mixed mono output which also has a gain pot to set the overall level of that group. Like the individual mixer channels, these can also add +6dB of gain if required, and an LED will report if you are overloading the output.

There are a couple of clever tricks in the design. With sources plugged into Group A but nothing in Group B, the Group B outputs are normalled to Group A, effectively creating two six‑channel mixers with the same inputs. You could use this to make two independent mixes of the same material, or as an auxiliary send to an effects unit. With the effects unit output routed back to a Group A input, you can create a neat feedback loop which is controlled by the Group B slider.

If stereo mixing is of interest, the Sponde can do that too. Using the two groups for left and right pairs gives you individual control over each stereo channel. This isn’t quite the same as having true stereo level control and panning, but it might suffice if you have occasional need to mix stereo signals. One nice bonus of the previously mentioned normalising is that you can mix mono and stereo sources by only plugging mono signals into Group A. This way mono signals will be copied to both A and B outputs and stereo signals will be panned across the two.

For each of the Groups, there is a direct output for channels 1‑4. These are post‑fader outputs and if a cable is plugged in, then that channel’s signal is removed from the Group output. In this way, you can use spare channels as simple attenuators without the signal being mixed into the master outputs. Although, if you use the normalling you can make use of both a mixed version at Group A, and a direct output version at Group B.

The sound of the Sponde is extremely good. I could detect no unwanted background noise even when pushing the gain on all channels. The +6dB limit on the amplifiers does prevent you from pushing the mixer into all‑out distortion, but you can get some nice warming overdrive. The clever design means that you can use the mixer in many ways. One day you might use it as a 12‑channel monophonic mixer or a six‑channel mixer with auxiliary send. The next day it could be employed as an eight‑channel attenuator, with four channels still spare for mixing. Another day you might mix six stereo signals together and add some overdrive warmth. Another day still, you might use Group A to mix CV signals (thanks to DC coupling on all inputs) and Group B to mix audio signals.

There are some things the Sponde doesn’t do. There is no CV control at all — this is a manual mixer. Neither does it have headphone output, mutes or solos, inserts or any other features you might find in a more advanced, traditional mixer. However, given the excellent price tag, this mixer has more features than it has any right to, and it doesn’t skimp on the sound quality. Everything about the Sponde is well thought out. It would make an excellent main mixer module for a system of any size. It is clever, powerful, very keenly priced, and it looks great too!