The name IO-Instruments was new to me when a box of intriguing-looking modules arrived on my doorstep. They are a German company formed in 2017 and their mission is to create colourful, leftfield modules that wouldn't look out of place on the dashboard of a spaceship hurtling though galaxies to a soundtrack of future electro-funk... at least, that's my analysis of it. 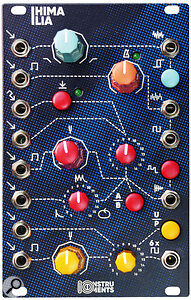 IO-Instruments Himalia: 16HP, +12V 90mA, -12V 70mA.First out of the box is the Himalia, a 16HP module subtitled as a 'Penta Sound Source'. So, five sound sources, five outputs. The outputs are on the right of the module and various CV and gate inputs are on the left. The sound sources comprise an analogue noise source, digital noise source with linked square-wave output, 32 sample ROM-bank and a six-voice square-wave oscillator. An intriguing mix and, in theory anyway, enough to put together a small song.

Each sound source occupies a row on the front panel with helpful dotted lines showing you what inputs and manual controls are connected to what outputs. So, moving from the top downwards the analogue noise comes first, its controls in blue. The knob, or accompanying CV input, changes the filtering of the noise from red to white to blue. A comparator circuit can be engaged to give the noise a much harsher, distorted sound.

Next up is the digital noise section. This is based on a sample and hold circuit which samples the analogue noise. The orange knob, or CV input, controls the clock rate. At high rates the noise is similar to the analogue white noise but slowing the clock causes the noise to become crushed and filtered until it disintegrates into sporadic digital glitch. There are two outputs here, one for the noise and one for the clock's square wave. The clock's CV input is calibrated to 1V/Oct, which means the square wave can be used as a simple oscillator.

Next up, and by far the source with the most front-panel controls, is the 12-bit sample-ROM playback, indicated by its red-coloured controls. There are two banks of 16 samples, all them percussive in nature. Sadly, you can't replace the samples, although the operating system is open source, so if you're suitably skilled anything is possible. The available controls open up a surprising range of sounds. There is no anti-aliasing filter, which means that at extreme pitch ranges the sounds become grungy, aliased and lo-fi. Kick drums turn into chainsaw motors, snares become EMP blasts and cymbals become gongs from the bowels of digital hell. A ratchet function repeats the samples for a varying amount of time, or indefinitely. At higher pitches, this can result in some delightfully glitchy sounds, and combined with an external envelope and VCA, the endless ratchet mode can be used almost like another oscillator. At low pitches, the outputs can be used as looping CV patterns.

If the Himalia is anything to go by, I'm very excited to see what other modules are in the IO-Instruments box.

One last feature of the sample playback is '8-bit sample melodies' mode. This appears to switch the sample playback to a different set of samples, composed of highly compressed 'melodies', simple 8-bit, game-style phrases which loop indefinitely. The pitch control still works on these, but the trigger doesn't. Because of this and the unchangeable nature of the loops, I'm not sure what use these are as sync'ing them up to anything seems to be impossible.

The last piece of the penta-puzzle is the six-voice square-wave, unison oscillator, marked by the yellow front-panel controls. There is a pitch control, with accompanying 1V/Oct CV input and an interval select control. This allows you to choose from 32 different unison or drone interval spacings, which include chord types, drones and even cymbal clusters (the TR-808 cymbal sound was made using six square-wave oscillators).

The Himalia is a versatile module with character. From the colourful styling and the chiselled knobs to the intriguing yet well-thought-out combination of sound sources, you can feel the love that's gone into the design. The choice of sound sources is flexible enough make a drum kit one day, a multi-waveform oscillator the next. It can produce thick swirling drones, 8-bit chip-tune melodies, gnarly techno percussion, Detroit chord stabs, glitchy tuned rhythms and even drum synthesis. The breadth of possibilities is impressive and its mixture of analogue and digital means it can sound anywhere from warm and fat to disgustingly aliased. If the Himalia is anything to go by, I'm very excited to see what other modules are in the IO-Instruments box.