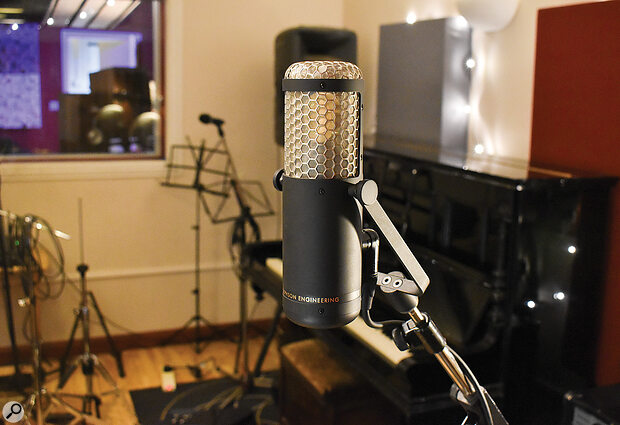 Josephson's newest design sounds as classy as it looks!

California-based Josephson Engineering have been releasing high-quality 'boutique' microphones for over 30 years now. For review here we have their latest design, which could broadly be described as a stripped-back and more affordable version of their C715 large-diaphragm capacitor microphone.

Despite being derived from that mic, the C705 has a number of changes from its more costly predecessor, and it's obvious that a lot of thought and care has gone into engineering this new design. The all-important centre-terminated capsule with its gold-sputtered diaphragm remains the same, although the C705 has a fixed cardioid pattern, and can't be switched to omni like the C715 can. This capsule is unusual in having only a single membrane; nearly all large-diaphragm mics employ Braunmühl-Weber dual-diaphragm designs, even if they are cardioid-only. In the C715, the pattern change from cardioid to omni is accomplished not by combining the signals from a front- and rear-facing diaphragm, but by opening (cardioid) or closing (omni) an acoustic labyrinth behind the single forward-facing diaphragm, as on the revered Sony C-37A. Removing the omni option in the C705 is a big part of how Josephson have managed to get the price down. The entire capsule assembly is internally shockmounted, which means the mic can be used directly from its yoke stand in any application.

Other departures from the C715 include the move to a transformerless design (borrowed from Josephson's C716 mic), a redesigned basket (made from a mesh, rather than the C715's open-cell aluminium foam), and the choice of steel rather than brass for the microphone's housing.

The C705 is a substantial and stylish-looking mic. The dark-grey matt finish of the body, and the honeycomb-looking basket, have a nice industrial look that treads that line between looking vintage and modern. It looks like a mic built to last for decades, and more than one of my recording clients commented on the "cool" mic during the review period. Josephson explain that a lot of thought was put into the C705's casework, with ferric-nitrocarburised steel being chosen for its strength. This involved a collaboration of sorts with Latchlake, who are known for their heavy-duty mic stands and accessories. In addition to improving the mic's longevity, the strength of this material allowed Josephson to offset the vertical supports for the microphone basket, which they claim significantly reduces basket resonance and comb-filtering. This helps the mic achieve a consistent sound even if the source is not perfectly on axis.

Another small cost-saving measure — and a welcome change for this reviewer — sees the C716's captive XLR cable replaced with an XLR socket, which is mounted on the back of the mic itself. It's an unusual place to put a socket, and it might have caused problems but for the fact that a good-quality right-angled XLR cable, available to buy as an accessory, was supplied with the review model. This kept the cable away from the yoke, and presented no issue at all over the review period. The microphone ships in a cardboard case, again to drive the price down as far as possible, but a Peli-style case is available to purchase separately for more mobile engineers.

I decided to try the C705 out on a male singer-songwriter I've worked with a lot over the last few years. We were setting up to record several new songs for this artist, and we would typically make use of the deep nulls provided by using large-diaphragm mics in figure-8 mode, in order to capture his voice and acoustic guitar at the same time but with maximum separation. I thought I'd see how the cardioid-only C705 fared on his vocal, however, and positioning it sideways to his mouth I was able to get a surprising amount of rejection from the guitar. What immediately struck me when listening in the control room was how well the low end of the singer's voice was being presented. Josephson explain that one of the characteristics of the single-sided capsule is an increased sensitivity to proximity effect. For this particular singer, it worked superbly, and being an artist who is quite comfortable in the studio he quickly realised he could shape the sound of his voice by leaning into the mic a little.

What also impressed me was the way the microphone captured the top end. It was bright-sounding, but the highs remained smooth and contained. Throughout the course of the same project, there was very little need for any de-essing or midrange corrective EQ. The same was true when I used the C705 on a female singer, where it provided a detailed, balanced vocal recording that seemed to take EQ well when needed in a mix.

I used it on several recording sessions, with a variety of singers and instruments, and not once did I feel the need to swap it out for another microphone.

When it's busy at my studio I tend to have a couple of mics that stay set up on stands for ease of use. Typically these would be mics that will work on anything and that I know I can rely on. There's no point packing them away as I know I'm going to be using them again very soon! The C705 quickly became one of those mics, and I used it on acoustic guitar, as a drum-room mic and in front of guitar cabs over a few different sessions. It was always impressive, and one feature that really struck me was how well it captured any non-direct sounds. A microphone's off-axis response can be a difficult thing to describe in a review, but microphones of a certain calibre seem less fussy about positioning in general, and when used in a multimic setup they just seem to work. It seems a bit extravagant to use a mic in this price range as a drum room mic, but the C705 was seriously impressive in this role, especially the way it restrained the cymbals when used about 4-5 feet back from a full drum kit.

Although much has been made of the cost-saving design, the C705 is still priced at the high end of the market, and it very much sounds like it! This was my first proper encounter with a Josephson microphone, and while I wasn't in a position to compare the C705 to its more expensive siblings, I can tell you that this is a hugely flexible and fantastic-sounding microphone. I always feel it's important to try and highlight any possible misgivings when writing these things up, but the only negative I can come up with here is the fact it comes in a cardboard box. I used the mic on several recording sessions, with a variety of singers and instruments, and not once did I feel the need to swap it out for another microphone. It looks solid and dependable, and it performs that way as well. With a few different preamps and outboard tools, I could quite happily use this mic to record a whole album — and I pretty much did just that during the review period.

Josephson have thought carefully about how to add a more affordable large-diaphragm mic to their range, and the result is the stylish-looking and impressive-sounding C705.