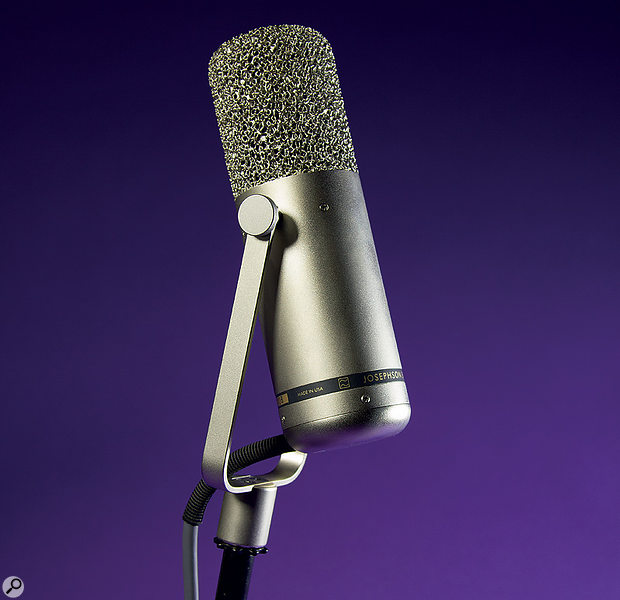 This high-end valve mic sounds every bit as classy as it looks, and a unique voicing switch adds to its versatility.

This latest in Josephson’s 7-series microphones is built in the company’s own Santa Cruz factory in California, and upholds their reputation for meticulous electronic and mechanical design. Outwardly, the most noticeable feature of this microphone is its headbasket, which is made from a special open-cell, reticulated aluminium foam; the same material is also used in the aerospace industry, for rocket motors and aircraft fuel tanks! As well as being rugged and acoustically transparent, this material also provides excellent electrical screening for the capsule, and helps to break up internal reflections. As the foam is self-supporting, there are no solid vertical supports to interfere with the sound. A fine mesh screen sits inside the foam to reduce the risk of dust ingress into the capsule area.

The capsule used in the C725 is a dual-diaphragm design identical to the ones used in the C700 and C716 models, and the capsule assembly is internally shockmounted so the microphone can be attached directly to a stand using the yoke mount that comes fixed to the body; this, however, can be removed if you prefer to use a third-party suspension cradle. Another distinguishing feature is the use of a cable permanently fixed at the microphone end. This might seem an odd thing to do, but it reduces the number of connectors, which should make for a cleaner signal path. The C725 is supplied in a truly professional-grade carrying case that also accommodates the power supply and cables. There’s also a semi-rigid protection sleeve that slips over the top half of the mic when not in use, to keep out dust and other contaminants.

The microphone has a satin nickel finish, and is physically quite imposing, measuring a hefty 63mm in diameter (not including the yoke) and with a length of 261mm. It weighs 1.2kg.

Josephson mics often employ a cascode circuit topology. This technique dates back to 1939, and is a means of stacking two valves or transistors in such a way as to maximise their bandwidth. In this design, the cascode circuit comprises a FET and a pentode EF806 valve, the advantage being that this topography exploits the low-noise attributes of the FET while retaining the character of the valve. This circuit feeds into a custom-built nickel-core transformer. Unusually, there are no pad or filter switches on the mic or PSU, although the sun/moon switch (see below) does increase the headroom and reduce the output by 12dB in the moon position.

The power supply (which can be set to 100, 120, 230 or 240 Volts) provides the necessary regulated voltages to run the microphone, and also houses a rotary pattern switch providing five options ranging from omni to figure-8, with subcardioid, cardioid and hypercardioid in the middle. Three separate regulator stages are built into the PSU, including one for the valve heaters, while further regulation takes place inside the microphone itself to eliminate any cable-length issues. While switchable patterns may not seem as flexible as a continuously variable control, this choice has the advantage of repeatability — and who needs more than three cardioid width options anyway? A standard balanced XLR provides the output, and the locking connector for the captive mic cable is a 12-pin type. 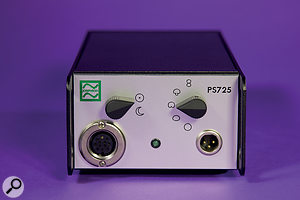 The power supply houses the five-position polar-pattern selector, as well as a unique sun/moon voicing switch.The sun/moon selector switch on the PSU provides a choice of voicings. The sun setting operates the amplifier stages at full gain to allow the valve maximum influence over the sound. This setting delivers a high sensitivity of 40mV/Pa. In the moon position, negative feedback is introduced, sourced from a dedicated secondary winding on the output transformer, sending some polarity-inverted signal back to the amplifier input stage. This knocks the sensitivity down to 10mV/Pa and reduces distortion, for those situations where a more neutral sound is appropriate. A reed relay handles the necessary switching.

By way of specifications, the microphone covers the full 20Hz to 20kHz frequency range (presumably at the -3dB points, though this is not stated), while the noise figure is below 15dB SPL (A-weighted RMS). The maximum SPL is 130dB or 142dB depending on the setting of the sun/moon switch. I couldn’t find a frequency response curve for this mic amongst the data on Josephson’s web site.

Josephson suggest that the C725 is well suited to capturing detail in vocals, as well as for instrument recording. In vocal tests, using the middle cardioid setting, it came across as having a good balance of warmth and detail. It is also worth mentioning that the mic seems more resistant to popping and sibilance problems than you might expect, most likely a benefit of the grille construction. Its sense of valve warmth isn’t overdone, though switching to the moon setting does make a difference. Louder sound sources reveal this difference more obviously, with the sun setting adding just the right amount of enhancement without sounding obvious. And, while the noise figure isn’t the lowest in the world, it is low for a valve mic and way quiet enough for any normal studio application.

The mic has a great sense of definition in both sun and moon modes, which I found to be really flattering on acoustic guitar, adding a welcome sense of precision and focus. Likewise, it helps vocals sound present and articulate. At the lower end of the audio spectrum, the sound remains full and punchy, without the muddiness some tube mics impart. Tests with electric guitar were also encouraging, the C725 capturing short pick transients in great detail.

The overall tonality, while not at all edgy or harsh, is noticeably different from that of mics designed to sound like warm and cuddly classics. This might mean that a little EQ is needed with singers who have a hard edge to their voice and are used to belting it out into squashy-sounding, soft-focus mics. For most sources, though, the result sounds ‘right’ before you even think about EQ. Having a choice of two sonic ‘flavours’ is welcome in matching the mic to different vocalists and instrument recording situations, though as is always the case, finding a mic that complements any specific voice in an artistic way is more important than technical spec and often defies price-related preconceptions. In other words, a studio owner looking for a mic that can do a good job covering a variety of singers could buy a C725 with full confidence, whereas an individual looking for the mic that best suits his or her own voice would still be advised to try as many mics as possible.

The figure-8 pattern sounds nicely ‘open’, as does the omni pattern, with only a minimal change in subjective tonality, though it is always difficult to judge exactly how much change there is when you consider that the proximity effect also changes (none for the omni setting, most for the figure-8 setting), as does the contribution of off-axis room sound.

Overall, the C725 is a serious, top-tier microphone that benefits from a ground-up design and a no-compromise approach to both the mic itself and the vitally important power supply — and this, of course, is reflected in the price. There’s no avoiding the cost issue, but a microphone like this will last a lifetime and give first-class results on a wide range of sources, whereas a high-end computer system costing the same will probably only give you five years of use before it becomes almost obsolete.

In addition to its performance as a vocal microphone, the C725 does justice to just about any instrument you point it at. Realistically, I can’t see many home studio owners spending this much on a microphone, but for the more serious end of the market, it makes a lot of sense to spend money on a really good modern microphone like this, rather than a vintage classic that’s limping its last and costs a fortune to maintain.

It is difficult to think of alternatives at this rarified end of the market, other than the usual European heavy hitters — or maybe a Sony C800G.

A really high-end mic at a high-end price, the C725 handles anything you throw at it.