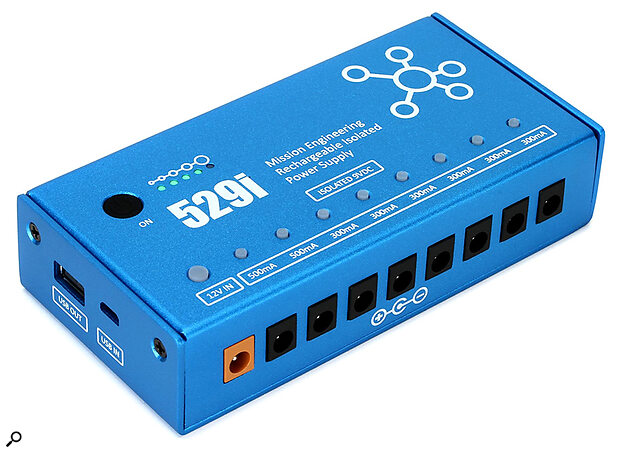 Mission Engineering's original 529 model power supply (which we reviewed in 2019) was designed to convert the 5V of direct current available from any USB power adapter or battery into the 9V DC used by most guitar pedals. Running a pedalboard from a battery supply means you don't have to seek out a conveniently located mains power outlet on stage, and it's also inherently quieter, as there's no potential for induced hum from the PSU's own mains transformer, or indeed an earth loop. I liked the format of keeping the battery separate from the converter so that it could be easily replaced when it could no longer be recharged, but I must admit I like Mission Engineering's new model just as much. The 529i — effectively a 529, with a built-in rechargeable battery — might seem like a negation, at least in part, of the original 529 concept, but it is actually a neater solution on a pedalboard, and it offers upgraded performance in some areas, too.

The 529i offers eight, fully isolated, 9V DC pedal power outputs: 2 x 500mA and 6 x 300mA. Outputs are short-circuit and over-current protected, with red LED fault indication. There is also LED confirmation of input and output power, and the charge state of the battery. A power on/off switch, absent from the original 529 as one had to switch it from the battery, is a welcome addition.

The makers state that a fully charged 529i will power a board with a 1000mA total load for two hours. That's not actually a lot of capacity if you're using several power-hungry digital pedals, but I've tested it on a more typical three-analogue, two-digital fly-board, and it has run for longer than any of the gigs I used to play back when there were actually gigs! The 529i is rechargeable via a 12V DC power supply or any USB charger, and can be simultaneously both charging and in use.

Finally, just because it is something that really bugs me with a number of other power supplies, the 529i ships with a nice, snug-fitting set of DC cables, including a voltage-doubler that allows two outputs to be used in series to power an 18V pedal — you'd be amazed just how many random pops and crackles on a pedalboard come from ill-fitting 2.1mm DC plugs!