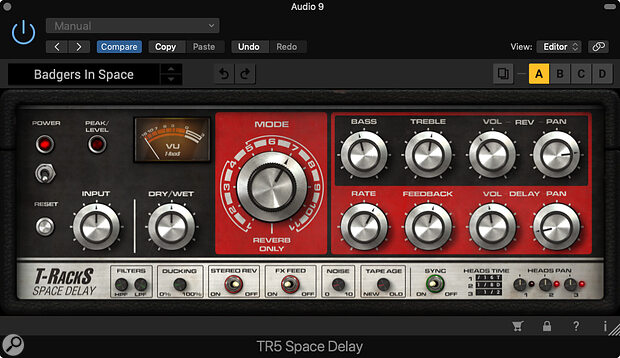 Despite the use of IK red rather than Roland green, there's no mistaking that the front panel of the RE‑201 Space Echo was used as the template for this plug‑in's GUI. This emulation is loaded via IK's T‑RackS 5 installer and authorised using their Authorisation Manager. All the usual Mac OS and Windows plug‑in formats are supported.

IK have endeavoured to capture the sound of the original hardware and have, of course, provided all the original controls, but they've also added a few useful features that today's DAW user should appreciate. For example, the spring reverb section can now be switched to stereo, there's a ducker to pull down the level of the delays when things get busy, and there are separate high- and low-pass filters for shaping the input to the delay processor, which is useful to soften the sound. If beaten-up old units are your thing, then the Noise and Tape Age controls replicate wow, flutter and tape hiss to whatever degree you choose. The other features that the hardware couldn't offer are DAW Sync and separate Pan controls for each of the three tape heads. All these extra controls are located in a narrow bar below the main control panel and include a time setting display for all three tape heads. An FX Feed switch, which can be automated, allows the input to the delay section to be turned on and off when you only want echo to be added to specific words or musical phrases.

IK have endeavoured to capture the sound of the original hardware and have, of course, provided all the original controls, but they've also added a few useful features that today's DAW user should appreciate.

As with the hardware, turning up the Input control can end up saturating the front end, but the meter gives you fair warning. Of course you may want to saturate the signal a little to warm things up, and that's all catered for by emulating the way the hardware overdrives. The power switch turns off the wet signal, while a Reset button sets the processor to its default state and clears out the buffers. Just as with the original, that central 12-way dial sets the head combinations that are active along with the in-built spring reverb. I used to have an original Roland unit and I recall that the short-tray spring reverb sounded pretty awful in isolation, but that it somehow worked nicely when blended in with the delays. IK have captured that character pretty faithfully. Controls in the red section set the usual delay Rate, Feedback and Volume, but IK have also added a Pan control. For the reverb, there are Bass and Treble controls, Volume and a Pan control, so it's possible to steer the delays to one side and the reverb to the other.

The Space Echo's delay times were varied by adjusting the tape speed — they went as low as 69ms for the first head and as high as 489ms for the third. As per the original, there is one reverb-only setting at position 12 on the dial, four delay-only positions and seven reverb-plus-delay positions. Rate also affects the tonality of the processed signal, such that lowering the speed of the tape dulls the sound slightly, just as it would in real life. While I don't have my Space Echo anymore, I can still recall what it sounded like, and I also have the excellent Universal Audio UAD-hosted version for comparison. With the same control settings, I feel that the UAD offering captures the organically liquid sound of the Space Echo rather more accurately than does the IK Space Delay, but rolling off some of the highs with the input filter and pushing up the tape age gets the sound much closer. I still think the UA just wins out for replicating the vintage 'cloudiness' of the original, but does that really matter? IK's Space Delay still sounds suitably tape-like and it has those extra stereo features as well as variable tape age. All in all then, it's a fine update on a classic.