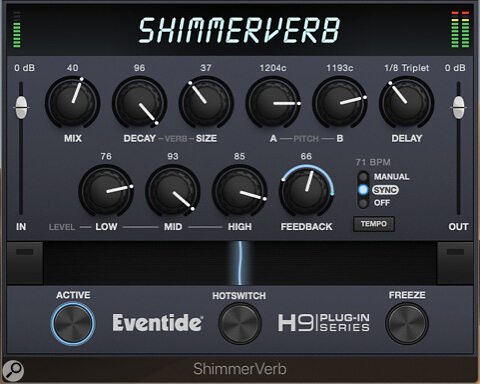 If lush, smooth, shimmer reverb and freeze effects are your thing, look no further than ShimmerVerb.

ShimmerVerb is the latest DAW plug‑in to have been ported from Eventide's H9 hardware platform. Essentially, it combines reverb with a dual pitch-shifter, delay and EQ, and it aims to replicate some of the more creative pitched-reverb techniques that were developed by studio engineers in the early 1980s, who used combinations of hardware. While some shimmer reverb effects rely on pitch-shifting the reverb tail, this one places pitch-shifters in the feedback loop, resulting in a more complex sound.

Authorised via an iLok account, ShimmerVerb can be used as Mono In/Out, Mono In/Stereo Out, or Stereo In/Out plug‑in, and it supports all the common plug‑in formats on Mac OS and Windows.

At the heart of the plug‑in is an algorithmic reverb, whose output goes directly to the plug‑in's output. However, this reverb output is tapped to feed, via a delay, two independent pitch-shifters, which operate in parallel. Their outputs are fed via a three-band crossover (that acts as an EQ), back into a summing point that sends some of this signal back into the reverb's input, via the feedback control. To prevent non-musical results, the pitch-shifters move in musical intervals of fourths, fifths and octaves, though these values can also be detuned in one cent steps.

The control layout is similar to that of the other H9-series plug‑ins, with three footswitch-styled buttons and a ribbon controller below the main panel. In addition to the input and output level sliders, the main panel sports 10 knobs for setting the wet/dry mix, the reverb decay time and size, the two pitch-shifter values (which each have a maximum range of ±2 octaves), delay time (up to 1000ms, and it may also be tempo or tap sync'ed), the three EQ band controls and Feedback.

Feedback obviously sets the amount of pitch-shift added to the reverb tail, but if you keep turning the knob to beyond its 100-percent position, you'll find that the legend changes to Pitch Kill, and then to Freeze. This presents some useful possibilities when using automation, as Pitch Kill takes out any pitch-shift, while Freeze produces an 'infinite reverb' effect by recirculating the audio in the reverb buffer and muting the input. It's a great sound-design tool as it allows you to generate drones, which can be further modified by adjusting the reverb controls once Freeze is engaged.

It's a great sound-design tool, as it allows you to generate drones.

As with other H9-series plug‑ins, the ribbon allows for smooth morphing between two sets of parameters. The first of the three 'footswitches' acts as a bypass, while Hotswitch allows you to store control settings (so you can toggle between current control settings and stored values). Switch three also operates Freeze, and MIDI control is supported, so you can use it with hardware controllers as well as automation.

ShimmerVerb creates a lush, smooth effect, and there's plenty of variation on offer. It sounds quite ethereal on guitar but it can also work magic on synths and even vocal sounds. Detuning the shifters opens up the possibility of subtle pitch-spiralling, which can make for a lovely, rich sound, while adding fourth or fifth intervals can also generate some interest. Add in some tempo-sync'ed delay and there's a wealth of shimmer sounds that will sit nicely alongside your rhythm tracks. Some of the octave-down effects are quite dramatic too, so if you thought shimmer was just sparkly reverb, you have some pleasant surprises coming your way! The effects on offer here have applications in many genres, but for ambient guitar it's a must-have. There's a lot to like about ShimmerVerb, particularly if you get it at the introductory price!