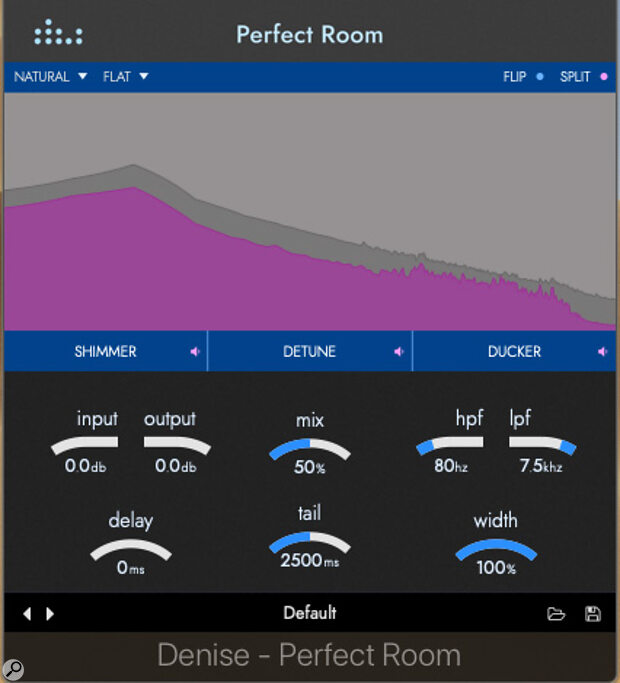 Not all algorithmic reverbs work in the same way.

Despite my gentle prodding, the Denise design team declined to reveal specific details of their approach to reverb, which they call 'TXVerb', but they do make clear that it works very differently from most other algorithmic reverbs. Traditionally, such reverbs use a system of recirculating delays and all-pass filters to synthesize the reverb tail, and a separate Finite Impulse Response (FIR, essentially a multitap delay line) to emulate the early reflections. A problem with this approach is that recirculating delays tend to ring at specific frequencies, which can sound metallic, especially on percussive sounds. Clever design work can minimise the ringing, and Lexicon and others have long used modulation to add complexity to their algorithm and reduce ringing. Such modulation doesn't occur in nature (unless the walls are moving!), but the results are subjectively effective, and most algorithmic reverbs today build on those principles. So a well-designed one needn't ring excessively, and if any artefacts are produced they're probably so ingrained into our musical consciousness (because they've been heard on countless classic records over the past 30 years or so) that they don't sound 'wrong'.

There have been other approaches, though, most notably the one adopted by Zynaptiq for their Adaptiverb plug‑in, which uses an entirely different spectral processing methodology. Essentially, a huge number of oscillators track the input frequencies and levels, and these are used to synthesize a reverb tail. This not only side-steps the ringing problem rather neatly, but it also opens up further possibilities for more creative processing.

Like Adaptiverb, Perfect Room eliminates the ringing problem. Denise also say that they don't use delays to generate the reverb tail, though they won't say specifically what they do. They could be creating the reverb tail using their own form of spectral synthesis, but since there are other possible approaches that could be explored (including envelope-controlled multiband time-stretching, and even multiband filtered noise) I can't be sure. It won't really matter to most readers how Denise's plug‑in works its magic, as long as it sounds good, works in a musical context, and is easy to use.

The GUI is pretty straightforward with control over input and output levels, the ubiquitous wet/dry mix, filtering to trim the highs and lows, and pre-delay, which in this case can be as high as one second. Up to 5s of reverb-tail decay time is available, and a three-option drop-down Curve menu selects the tail shape. 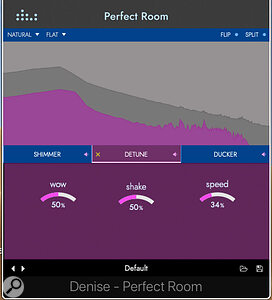 The Detune mode adds modulated pitch shift, akin to tape wow and flutter.In complex spaces, such as cathedrals, natural reverb often has a more complex decay envelope, due to the way more remote spaces are excited after the initial reverb. High-end algorithmic reverbs by the likes of Lexicon and Bricasti emulate these, but here the options are more straightforward. The choices are Natural, Triangle and Square. Natural is an exponential tail shape, replicating how you'd expect a natural reverb to decay in a real space. Triangle offers a linear decay, and Square has a level sustain followed by an abrupt cutoff, much like gated reverb.

You don't get the familiar rooms/halls/plates/ambience algorithms for emulating different types of space and there are no controls relating to early reflections either. Indeed, I couldn't detect the presence of any early reflections in the reverb, and this gives it more of a plate-like character, in which the density is high right from the start. However, there is a Type selector that controls the timbre of the reverb tail, the choices on offer being Bright XL, Bright, Flat, Dark and Dark XL. A Flip function reverses the shape of the reverb tail, creating a backwards effect. As with most synthetic reverbs, it is possible to create a pseudo-stereo output from a mono input, and the stereo width is adjustable too. A dynamic display shows the spectrum and level of the reverb decay. 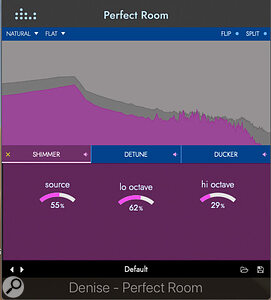 The Ducker mode attenuates the reverb signal when the source signal is present.Three horizontal sliders control the overall amount of Shimmer, Detune and Ducking in the sound, and an 'open' button for each brings up further controls. Shimmer reveals a small control panel allowing the user to balance the original sound, an octave-up component and a one-octave-down component. Detune has controls for adding tape-style wow and shake, which is akin to tape wow (slower modulation) and flutter (faster and random). Both modulations can be adjusted using the Speed control. The fully adjustable Ducker is there to keep the reverb out of the way when things get busy, but allows it to fade back in during pauses. Engineers often use a dedicated ducker in tandem with a reverb for this, but it is so much less fiddly to have it built into the plug‑in. Opening the Ducker section provides access to the threshold, ratio and time-constant controls.

One slight catch is that this plug‑in introduces a chunky 4096 samples of latency. It reports this latency to the DAW, of course, which can compensate for it when you come to do a mix, but you probably wouldn't want it to be active while tracking or playing live.

Perfect Room sounds dense and very room-like, but with no obvious ringing and, importantly, it integrates seamlessly with the dry sound rather than appearing to be simply stuck on top of it. It has its own distinctive sound: in comparison with most of my other reverbs, the result sounded tighter, which suggests either that the invitial decay is somewhat faster or that the decay curve is a bit, erm, curvier; and I found that I needed to set the wet/dry mix a little more towards wet than I'd usually use to get the same subjective reverb level.

It is capable of enhancing just about any type of source material without obscuring it.

While its low coloration and tight character are most evident on drums and percussion, it is capable of enhancing just about any type of source material without obscuring it. The various tonal options run from brighter than you're ever likely to need to very dark, and the Shimmer and Detune sections plus the Flip and tail-shape options make it possible to set up special effects or texturally enhanced reverb types too. 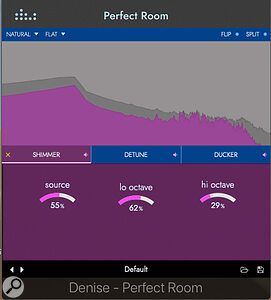 Shimmer mode adds a high and low octave to the reverb sound.The Natural reverb tail shape produces the most realistic decay, as you'd expect, and it works particularly well on low-pitched sounds, such as basses and kicks, without making them sound messy.

The Triangle shape is useful if you want the reverb to remain dense for longer. Obviously, this sounds less natural but it's not unappealing. Square can work well in adding texture or a short ambience without introducing a lengthy tail, and it can sit well with rock guitar as well as drums. It can also work on some vocal styles, either alone or used in conjunction with a more conventional reverb.

I think I'd have found it slightly more useful if Denise had included a means of morphing between the Natural logarithmic decay and the linear Triangle setting — I'm sure that there would be some useful 'Goldilocks zone' hybrids in there somewhere — though you could always balance two instances on separate aux tracks.

While the ambiguous nature of this reverb enables it to fit comfortably into most musical contexts in the same way that a plate does, you may need to call upon other reverb options if you want to conjure up a specific type of space. But that doesn't detract from what this reverb does well.

The best way to approach Perfect Room is to forget about the underlying technology and just listen to see if the character of reverb it offers brings something to your mixes that your existing reverbs can't. For that reason it's well worth taking the free trial version for a spin.

A novel approach to reverb that delivers high density with a lack of coloration, in a simple-to-control format. It can be used in a similar way to plate reverb: no specific room type needs to be emulated, and it works well on just about any musical source.