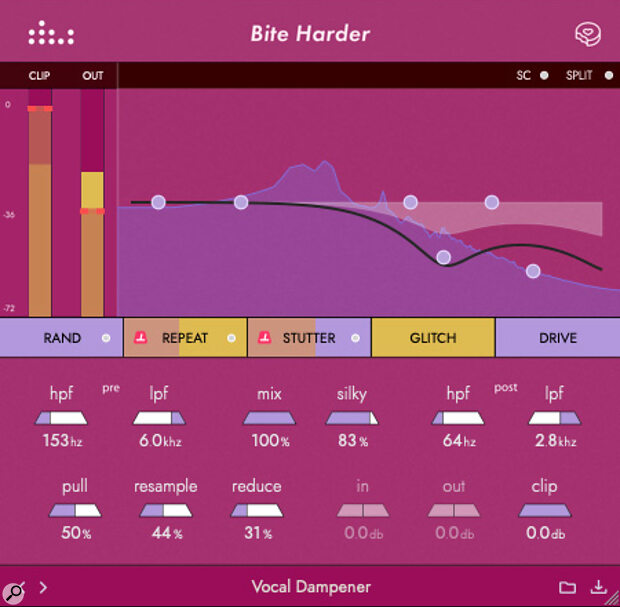 If you already checked out our review of the Denise Dragon Fire compressor, you’ll be familiar with the Denise ‘push‑pull’ approach to processing. Essentially this means creating an EQ curve to go before the processing, and the option to apply the inverse curve after processing. What this amounts to is that the effect can be concentrated into those parts of the spectrum that need it and be dialled back in other parts. The filters can be set to be subtle or to include dramatic resonant peaks.

Bite Harder, which supports the usual roster of plug‑in formats for Mac and Windows hosts, combines push‑pull EQ with familiar bit‑crushing and sample‑rate reduction functions, though there are further controls to facilitate more creative audio destruction. For example, while the Silky control may be used to smooth out the effect created when adjusting the bit and sample‑rate reduction controls, Glitch adds even more nastiness. There’s also an effects layer and a drive control.

The controls are arranged as a horizontal row of boxes, four of which act as amount faders plus 12 small horizontal sliders below. In the horizontal row, there’s a Random button for generating random EQ curves, plus settings for Repeat (which loops a section of sound) and Stutter (a chopper) that are adjustable in tempo‑sync’ed increments. Small, non‑latching buttons allow for these two effects to be engaged momentarily via automation. Glitch brings in ringing, non‑harmonic components via a ring‑modulator while Drive adds some old‑school distortion that can get quite spluttery, rather like an early fuzz pedal. There’s also a transparent clipper that can get less transparent, in a useful way, if you really push it.

The controls below this govern mix, filtering, levels, bit‑reduction and resampling plus there’s a Pull control that adjusts how much inverse EQ is applied to the treated signal. The Silky control also resides here.

This is a serious Plug‑in of Mass Destruction, capable of wreaking audio mayhem on a grand scale.

While these kinds of treatments can work wonders on bland drum loops, more careful adjustment can add useful enhancements to synth sounds, and I managed to cook up a patch that added a bit of reedy‑sounding brightness to an EBow part without the end result sounding too obviously distorted. Bass parts are also fair game.

If you are a fan of bit‑crushers, then Bite Harder gives you more flexibility than most destruction plug‑ins with the push‑pull EQ being particularly powerful. I’m sure it will find applications across multiple genres, though the novel Repeat and Glitch functions will probably appeal most to the EDM fraternity, since they make the creation of stand‑out spot effects really simple. This is a serious Plug‑in of Mass Destruction, capable of wreaking audio mayhem on a grand scale, so if that’s your thing, download the demo version and try it for yourself.