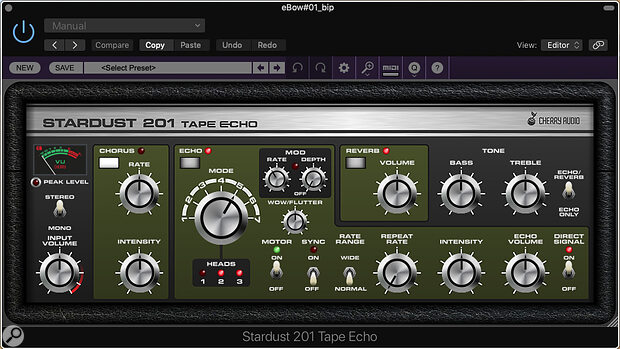 I have owned many different tape echo units over the years but the most reliable was my Roland Space Echo, which also delivered cleaner repeats than many earlier tape units. Cherry Audio’s inexpensive Stardust 201 plug‑in borrows features from the original RE‑201 and RE‑301 hardware, including the chorus section and spring reverb. Being honest, I was never too impressed by the reverb in the original, as it sounded too twangy and drippy for my own tastes, but it seems that authenticity has been traded for usability in this respect — the reverb implemented here seems altogether better behaved than that in the hardware, and that’s a real win in my book!

The front panel is visually reminiscent of the original, here sporting a seven‑way Mode selector knob with virtual LEDs to determine which of the three replay heads are active. A Mono/Stereo switch, affecting the echo, reverb and chorus, has been added (the original hardware was strictly mono). The Reverb, Chorus and Echo sections have separate On buttons and there are the usual controls for echo Volume, feedback (Intensity) and Bass/Treble EQ, switchable for Echo Only or Echo plus Reverb. The Repeat Rate can be set to Normal or Wide, the latter giving a maximum of two seconds for head three, though there’s also a Sync switch that allows for delay times up to eight beats. For those who like the sound of tape slowing down, there’s a Motor On/Off switch. There’s also a MIDI control section.

Chorus has simple Rate and Depth control and there’s an input Volume control with a moving‑coil level meter above it to the left of the panel. It is possible to drive the meter into the red to add a little saturation if required. Bottom right is a switch to kill the dry sound, which would normally be used when the effect is set up in an aux send configuration.

The reverb implemented here seems altogether better behaved than that in the hardware, and that’s a real win in my book!

Part of the character of a tape echo is down to transport imperfections that add unplanned pitch wobble. Wow and Flutter is emulated here — a single knob controls how much you add — but the designers have also added a separate modulation section, with its own Rate and Depth controls. This goes from subtle to seasick and can work really well in combination with the dedicated Chorus section.

Judging the absolute authenticity of the tape delay sound is more difficult, because much depended on how worn the tape was and whether or not you used the recommended tape loops or spliced up your own. But this plug‑in definitely captures the overall vibe rather well, and everything seems very well thought‑out — for example, the authentic dub‑style runaway sound you get when maxing out the Intensity control.

I have other emulations of the RE‑201 Space echo that cost rather more than this one does — under forensic scrutiny some may score a few points on absolute authenticity in certain areas but, as a musical tool, the Stardust 201 sounds fabulous and delivers everything you could want from an emulation of a tape loop echo.