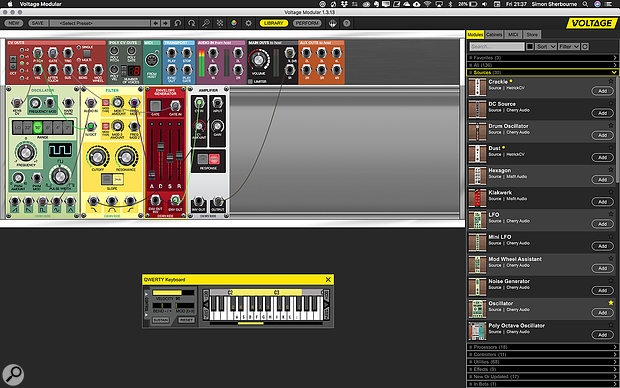 Voltage Modular is a virtual modular synth environment that promises to break through common usability barriers. Like its peers Softube Modular, Reaktor Blocks and VCV Rack it presents a rack environment, with interchangeable modules, patch cables and a simulation of Eurorack-standard control and audio voltages.

Cherry Audio offer two starter packages. Ignite is ostensibly the entry-level bundle at $50, but includes all the basic components (45 modules!) for classic synth patching. For the full experience the Voltage Modular Core + Electro Drums bundle ($99) comes with over 100 modules, including a full set of analogue drum voice modules and a drum sequencer.

Voltage Modular can run stand-alone or as a VST, AU or AAX plug-in. The main application and plug-in are all you install yourself. The modules that you own as part of your bundle — or that you buy as extras — will automatically download and install when you sign into your account inside the software. The module browser has a Store tab where you can make in-app purchases, which are downloaded and installed without requiring a restart. This is exactly the kind of friction-free user experience Cherry Audio are talking about.

Similar to Softube Modular, Voltage Modular has a fixed panel of I/O controls embedded in its virtual rack. This provides a set of Eurorack-standard CV sources derived from incoming MIDI. Additionally, a virtual MIDI port lets you connect MIDI directly into modules that support it. Clock and transport inputs provide synchronisation with a host DAW (curiously, you need to use a dedicated MIDI Clock converter module in stand-alone mode). Then there are audio connections that route to and from your plug-in host, or your audio interface.

The main window can be resized freely in both stand-alone and plug-in modes (take note Softube!) and you can also scale the size of the rack and modules. A Library column slides in from the side of the main work area and provides access to your modules. Partial patches can also be stored here as 'Cabinets' but full rack snapshots are managed in a separate, searchable Preset menu at the top of the window.

There's a fair selection of presets if you want to use Voltage Modular as a synth without wading too far into programming. The patch library is also a resource for exploring what's possible and unpicking other people's patches.

Individual rack rows can be saved as 'Cabinets', like this Minimoogy patch.

Having had a look around it was time to tinker with the modules and build something from scratch. The large amount on offer in even the basic starter pack can be overwhelming, but the Library tab can be searched, sorted and filtered, and there's a Favourites system. The Library's thumbnails are a bit too small, but if you click and start to drag a module you'll see its full-size panel before you decide if/where to place it in the rack.

I love the way you can simply slide modules into position and re-order them later, with modules politely shuffling out of one another's way. I get frustrated in VCV Rack and Softube Modular shifting things one at a time like a sliding tile puzzle.

Inevitably I started with a 'Subtractive Synthesis 101' patch using the Oscillator, Filter, Envelope Generator and Amplifier from the core module collection. Graphically, Cherry Audio use a design language of chunky skeuomorphic controls and jacks on colourful panels. The overall effect is a slightly cartoonish realism reminiscent of Reason (although crisper and easier on the eye as Reason lacks high DPI support or resolution independence). There are some thoughtful design decisions, such as colour-coding by module category, and the knob value indicators. If I'm honest, though, the look is not really my cup of tea — it's a bit, well, '90s alongside more modern, flat interfaces. Third-party module makers can of course choose their own aesthetic.

Patching follows the usual convention of clicking and dragging cables between ports. As with similar systems, if you drop a cable on a port that has existing connections it will add it rather than replace what's there. However, Voltage Modular has a handy solution to the problem of changing or removing connections when there are multiple patch cables. When you click on a port it blooms into a circular mult of six jacks with all connections shown separately.

There's a heap of preferences for changing the appearance and behaviour of cables, such as transparency, thickness, and auto-hiding. You can also set the colour of individual cables to help keep track of things.

Whereas a hardware modular has a fixed palette of modules at any given time, there's a kid-in-a-candy-store sensation with software modulars, and Voltage Modular has more candy than most. As well as the core modules featured in my first patch there are 'Super' versions of the LFO, Oscillator and Envelope Generator, offering considerably more complexity and control. For example, the Super Oscillator offers linear and exponential FM, shape morphing and wavefolding, and the Super EG is a multi-stage function generator with variable curves, looping and end-of-stage triggers. 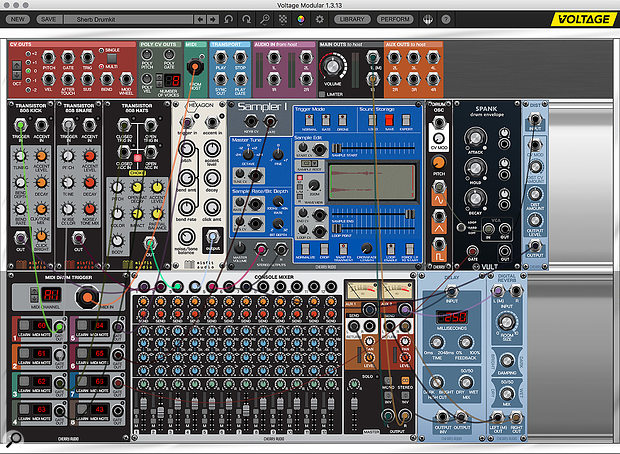 A drum kit patch with individual MIDI notes split out to triggers.

Other sound sources include the Poly Octave Oscillator, and the Vintage Oscillator, which I combined with the Ladder Filter module to make a crude but very usable Minimoog patch. Other classic emulations have been hitting the Store at impulse-buy prices (typically $10-15). The TB and MS oscillators and filters are well worth the money.

Voltage Modular also has a Sampler module that can import and play audio files. Start, end and loop points can all be modulated with CV. For $10 you can upgrade to Sampler II which offers stereo, gate-activated sampling.

The Core bundle also includes a set of 18 drum synth modules from Misfit Audio that take care of all your classic Roland sounds and more. These come with a four-channel, 16-step gate sequencer with pattern recall.

Regular CV/note/gate sequencing is catered for by both the Arpeggiator and Eight-Step Sequencer modules. The sequencer uses a classic array of sliders and buttons, but with some handy niceties like variable range and a built in quantiser. It can be started and stopped from external gates, and sends a trigger when it starts playing. However, there's no end-of-sequence trigger, and therefore no sensible way to chain sequencers together for more steps.

It would be impossible to look at all the modules in detail, but in brief there are sub-mixers, an attenuverter, various logic modules, a rectifier, glide, meters and many more. The Formula module is interesting, allowing you to type in a mathematical function to operate on three inputs.

Several effect modules are included including Chorus, Delay, Distortion and two reverbs. They're not the most illustrious sounding devices (again I'm reminded of Reason, with its basic mini effects) but they're good to have.

Even though you get a lot as standard you'll inevitably find some gaps, or things you'd like to improve. There's already quite a lot to choose from in the Store, and not just from Cherry Audio themselves.

If you find the built-in effects lacking you'll be pleased to see that PSP have released a huge suite of modules based on their plug-ins. They're mainly known for effects, but they've also made my favourite oscillator so far for Voltage Modular: a four-part FM synth module called eFeMerizer.

The open nature of the platform and the Voltage Modular Designer software mean there's a lot of independent developers releasing modules for the platform with varying quality. Two that really shine and show VM's potential are Michael Hetrik (who'll be familiar to Reaktor users) and Vult, both of whom are selling really useful, great–sounding and attractive modules. (Vult offers the only low–pass gate I could find).

A notable difference currently between Voltage Modular and both VCV Rack and Softube is the lack of any modules from the hardware Eurorack world. I would have loved to have seen modules based on the open-source Mutable Instruments designs, which are available on both the other platforms. I was also looking for something along the lines of the Intellijel Rubicon — my favourite thing in the Softube world. Happily, I learned that the first big hardware crossover coming to Voltage Modular is another great through–zero oscillator, the Cynthia Zeroscillator. This is being ported by its co-designer Mark Barton, and will hopefully be the first of many.