Voltage Modular's Perform module provides a fixed set of macro controls that you can map to modules across the rack. While you don't have Softube's ability to create a custom panel layout, VM's implementation is better. Multiple parameters can be assigned to the same knob, and you can limit and invert the control range. Controls that are assigned to Macros can still be changed directly.

The buttons are not so well conceived. They are momentary triggers, only able to effect a one-way button press elsewhere on the rack. They can't toggle a state or change a continuous value. They are useful as transport buttons mapped to the Sequencer though.

As well as these internal control mappings, there's a comprehensive MIDI Learn feature, plus modules for freely converting between CV and any MIDI CC data. Again, these are not possible with Softube, and VCV Rack won't get direct learn until its 1.0 release. By accident I discovered that while in MIDI Learn mode you can also assign computer keys to control module parameters.

For $15 extra the Remote Control module adds a bank of eight modulatable controls that you can map to any other control, including the Perform Macros. Thus you can gain CV control over any parameter that doesn't have a modulation input. Smart.

An area where Voltage Modular really stands out from the crowd is polyphony. It gives you the tools to build polyphonic synth patches either from the ground up using monophonic components, or using natively polyphonic modules. 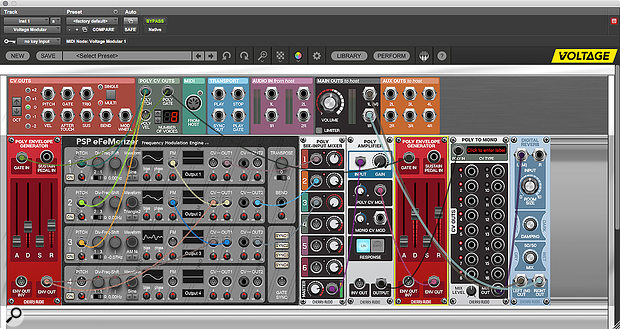 The traditional 'brute force' method uses the Poly CV Convertor module. This splits a MIDI input source into multiple voices of pitch CV, gate, and velocity CV (plus mod sources). You can then build each voice path in parallel, essentially duplicating the core modules of your synth multiple times. The Poly CV Converter has four outputs, which is usually enough to juggle in this kind of patch, but it also has an overflow output for chaining multiple converters.

The Voltage Core package offers a much tidier approach using natively polyphonic modules and connections. With these you can construct a patch in much the same way as you would a regular monophonic modular patch, but with polyphonic voicing. The main I/O panel has a dedicated Poly CV section providing polyphonic CV voice sources derived from your master MIDI input. Alternatively, you can use the Poly MIDI Input module or use a MIDI source from within the rack. Modulation sources other than velocity are not included as poly outputs, as they are assumed to be mono (including aftertouch, for some reason).

Polyphonic cables are stripy, and the connection points look like old multi-pin serial ports. Poly cables can carry 16 channels of CV/audio, gate and velocity. You can't connect poly cables to mono jack points, and Voltage Modular greys out all invalid destinations when you pick up a cable.

All the basic modules have poly versions: the Oscillators, Filter, VCA, Envelope, Mixer, Quantizer, even the Mult. Then there are modules for converting between mono and poly, either by combining multiple mono sources to one poly output or stripping out/mixing poly channels. There are even poly unison and poly spread modules for creating those dancefloor stacks you know you want.

There are several good options for open software modulars and Voltage Modular certainly earns itself a place at the grown-ups' table.

Another differentiator for Voltage Modular is that MIDI exists within the rack, and you can make point-to-point MIDI connections between modules. In general the other virtual modulars convert between MIDI and CV on the way in and out of their environment and stick to CV internally. In reality many Eurorack modules and Eurorack-connectable synths have MIDI connections so it seems like a gap in the simulation in other soft modulars.

MIDI exists alongside CV in the Voltage Modular environment, with modules for converting between the two worlds.

MIDI connections in Voltage Modular are chunky DIN ports connected with thick cables, making them easy to distinguish from CV/audio connections. Cherry Audio make a stack of MIDI utility modules, all of which come in the Core bundle (and quite a few in Ignite).

I found the MIDI modules really useful, especially as I was testing Voltage Modular alongside the Toraiz Squid MIDI sequencer and wanted to set up multiple sound sources inside VM. I made a drum machine based around the eight-channel MIDI trigger module, and used the MIDI Channel Filter to split MIDI off to other sub-patches within the rack.

While working with the hardware sequencer I had Voltage Modular running stand-alone and hosting independent clusters of modules in the rack. As well as internal MIDI patching, I found a couple of other features that support this working method, and one bump in the road...

Plug-in hosting is high up in the 'Pros' column. VM Core has Plug-in Host devices in two sizes. These modules are containers for a plug-in, providing audio interfacing between the plug-in and the rack, and four or 12 mappable parameter controllers that can be modulated via CV. There are similar modules in Reason and VCV Rack.

The Plug-in Host module does not have V/oct, gate or trigger inputs. Instead it has a MIDI input, so if you host an instrument plug-in you need to use a CV-to-MIDI converter module to sequence it from within the rack, or connect it to an external source via the master panel or a MIDI input module.

Another boon is VM's ability to store 'cabinets', which is what Cherry Audio call a single row in the rack. You can save a row out and it will subsequently appear in the Library under the Cabinets heading. You can then restore a Cabinet with its own internal cabling, but not any connections to the rest of the rack or I/O. I added a Mult to my simple Minimoog patch to distribute all the pitch and gate connections, enabling me to save it as a 'sub-patch' that could be easily reconnected.

Less helpful is that when running stand-alone it's surprisingly difficult to set up a master clock and transport. The sync and transport on the main panel do not respond to MIDI Clock or Start/Stop commands, so are only really useful while running as a plug-in. There is a MIDI Clock Divider module that will convert MIDI sync from the outside world into modular clock, but I couldn't find any way to get Start or Stop messages from the outside world. There is a module for going the other way though: generating MIDI Clock and transport messages from modular clock and gates.

When Voltage Modular is running as a plug-in, the Sync/Transport panel will take its cue from your DAW. Also, I found that plug-ins running in the host module automatically take clock and transport commands from the host even with no connections.

There are several good options for open software modulars and Voltage Modular certainly earns itself a place at the grown-ups' table. It has the flexibility of running both stand-alone and as a plug-in, and can host plug-ins itself in either mode. It's got the most user-friendly interface for browsing, adding, moving and connecting modules. It has direct MIDI Learn, CC-to-CV and macro performance features. It also has a number of features that are currently unique compared to its peers, such as polyphonic CV, inter-module MIDI connections, and sampler modules.

The two Voltage Modular packages both come with tons of stuff and there's a centrally managed Store and module management system that avoids any messy admin or installation by the user. The Store already has a lot of additional models for sale, mostly under $20 each. There's a lack of 'big name' Eurorack modules compared with Softube Modular or VCV Rack, but hopefully this will change soon. Overall, Voltage Modular gives you a fun and immediate modular experience without dumbing anything down.

Softube Modular sounds fantastic and has ports of some of the best real-world modules, but it's plug-in only and has a frustrating user interface. Reaktor Blocks to my ears is still the one to beat sonically, with exceptional low-end solidity and clarity. Voltage Modular's most obvious alternative rival is VCV Rack, available but still currently in beta. VCV's stylish look, DIY open-source approach, and ports of several IRL modules will likely appeal to many Eurorack enthusiasts. Voltage Modular on the other hand offers all the same essential functionality (and more) in a more traditionally managed package.

A key part of Cherry Audio's master plan is making it relatively straightforward for other developers to make and distribute modules for Voltage Modular. The Voltage Module Designer software lets you build modules in Java, with much of the code generated automatically from pre-built user interface elements and audio handling libraries. Custom functionality and DSP code can be slotted in. Modules can be run and tested within the app. You still need a level of knowledge to get worthwhile results, but this isn't aimed as a general user feature; it's there to help bring more modules to the platform. There's also a simple and open mechanism and licence model for selling modules on the in-app Store, with a healthy 70 percent of profits coming to the developer.

Don't be fooled by the bright colours and easy operation, Voltage Modular is a proper modular monster.