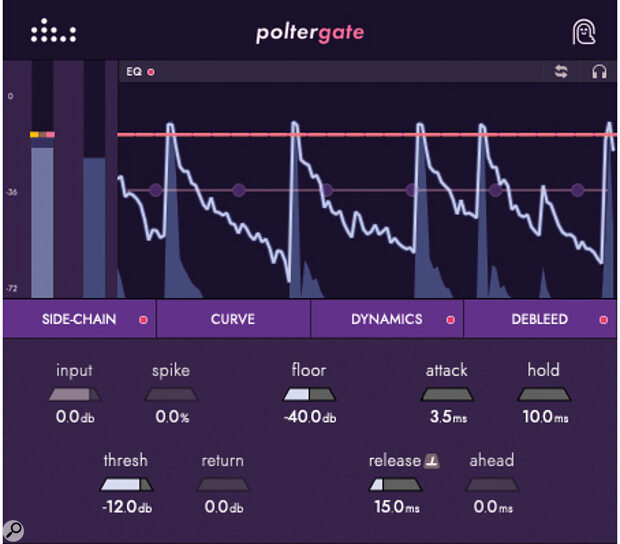 Poltergate is a combination tool for use with drums or other percussive sounds and has both creative and problem‑solving capabilities. Supporting the usual‑suspect desktop plug‑in formats, it combines gating with bleed‑reduction and transient shaping, and it can be applied to recorded drums, drum samples, drum loops or even to non‑percussive sounds, provided that the notes have a recognisable attack. Even the gate has features you might not expect. In addition to a threshold and comprehensive parametric side‑chain EQ and side‑chain monitoring, there’s a Spike control that makes the gate more sensitive to transients.

Controls for Attack, Hold and Release allow the gated drum sound’s envelope to be shaped in a fairly conventional way, while Floor sets the maximum amount of attenuation applied when the gate is closed, and Return sets the gate‑off threshold, effectively adding hysteresis by making the gate close level lower than the gate open level. This is often necessary to avoid unwanted ‘chattering’ or multiple triggering. Lookahead of up to 10 milliseconds is available. All the controls are available on four tabs: Side‑Chain, Curve (amount), Dynamics and De‑bleed, which are used to access the various sections.

The Flip button reverses the action of the gate so you only hear what’s normally gated out.

A waveform envelope display in the upper part of the screen features thresholds and shaded grey areas to show the effect of the processing. The side‑chain EQ curve is also visible here, in a more subdued colour. An external side‑chain is also available, opening up a lot of creative possibilities, especially when used with the Flip button, which reverses the action of the gate so you only hear what’s normally gated out. 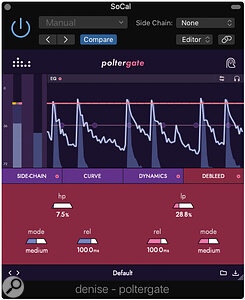 Poltergate's De-bleed controls.To attenuate spill that is in a different frequency range from the drum sound being gated — for example, cymbals bleeding onto a kick or tom track — the De‑bleeder section includes high‑ and low‑pass filtering, each with a choice of de‑bleed Mode (soft, medium or heavy) and Release time. De‑bleed is applied after the gate threshold and time constants have been set, and it works on the same threshold as the gate. This has the effect of applying EQ to the signal during its decay to minimise the subjective effect of spill. In effect, then, this applies a form of frequency‑selective transient shaping, by modifying the spectral content during the note’s decay.

For use in melodic recordings or loops, the side‑chain EQ can be used to target the sounds you wish to keep, with Spike again helping to target transients. The release time of the gate can be sync’ed to the host DAW tempo for the creation of rhythmic effects, and Curve can be adjusted to change the feel. Depending on the type of material, it’s often possible to use the gate in combination with surgical side‑chain EQ to target specific notes. 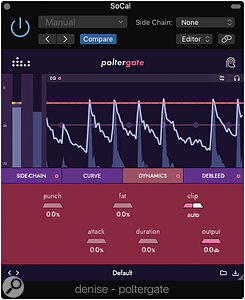 Poltergate's Dynamics controls.In the Dynamics section, there are controls for Punch, Fat and Clip along with Attack and Duration. Punch enhances the note transient while Fat affects the sustain and is adjusted using both the Attack and Duration controls to set the ramp up and subsequent decay times of the added sustain. Clip can be used to add aggression to things like snare drums. In the v1.1 update, a make‑up gain control was added to the dynamics sections too.

It’s important to understand what Poltergate is and what it is not. It isn’t really designed to separate sounds from an already mixed drum kit — even if, with careful side‑chain filtering, you might be able to split out the kick or even the snare if the kit is balanced in a suitable way. Rather, what it is really about is an enhanced form of gating. The parametric side‑chain EQ and Spike control allow for more forensic operation than those gates that have only high‑ and low‑cut side‑chain filters, and once the gate has done its thing you can use the additional tools to finesse the transient character of the sound and help disguise any spill.

How effective Poltergate is on melodic sounds depends very much on the character of those sounds — you’re still relying on the gate section to handle the initial note recognition, though you can often come up with interesting treatments when working with loops, and the external side‑chain option and invert functions add further flexibility.

To sum up then, Poltergate can be thought of as a frequency‑conscious gate with additional superpowers, optimised to work best on material with clearly defined transients, notably though not limited to drums and percussion.

Regular price €99. Discounted to €47.43 when going to press. Prices include VAT.