One of the best Uni‑Vibe clones on the market just got an update.

Originating in Japan in the late ’60s, the Uni‑Vibe Chorus Vibrato was the first standalone modulation pedal. In a world only just getting used to fuzz and wah‑wah pedals, it offered something truly different in guitar tones. An asymmetrical throbbing amplitude and tonal modulation that is a bit like a phaser and a bit like a chorus, but without being identical to either, the Uni‑Vibe sound will be known to many as the effect used by Jimi Hendrix in his iconic rendition of ‘The Star Spangled Banner’ at Woodstock. 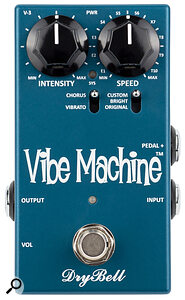 The Uni‑Vibe pre‑dates the invention of the bucket‑brigade analogue delay chips that would facilitate the creation of the first Chorus pedals, notably the Boss CE‑1, so despite its Chorus and Vibrato setting options, its circuitry has far more in common with a phaser. The Uni‑Vibe may have been created to offer keyboard players a compact alternative to the bulky Leslie mechanical rotary speaker effect, but it would be guitar players that would really exploit its potential to the full.

The original Uni‑Vibe used a lightbulb surrounded by four light‑dependent resistors and a lot of discrete‑transistor circuitry, and any attempt to make a Uni‑Vibe clone without a similar optical element tends to lose the unique shape of the modulation and thereby an essential flavour of the sound.

Croatia‑based company DryBell made their first Vibe Machine photocell‑based Uni‑Vibe‑style pedal just over 10 years ago, and recently celebrated that milestone with the release of the latest v3 iteration. Most major pedal manufacturers and a number of smaller boutique ones now have a Uni‑Vibe‑style offering in their line‑up, many of them very good, but DryBell’s v2 iteration was certainly amongst the best, offering extensive customisation via an array of miniature trim pots, as well as its fundamentally authentic sound. So, what could be special about a v3 in which nothing much has changed?

The short answer is the sound. A less mid‑focused modulation leaves the overall spectrum less altered than with a v2, at the same time as making more depth and ‘swirl’ available overall. I prefer a Uni‑Vibe placed before amp or pedal distortion, particularly with this one, but with so much tweakability available, commendably all available from the outside of the unit, it would be a mistake to assume that this version can’t be made to sound like almost anything you want in the Uni‑Vibe spectrum. Of course, the flipside of wide‑ranging adjustability is that you can very easily have it sounding really not like a Uni‑Vibe at all. It is a good idea to mark the positions of the tweak pots before you depart from the factory settings!

What could be special about a v3 in which nothing much has changed? The short answer is the sound...

The two big controls, Speed and Intensity, are self‑explanatory, as is the Chorus/Vibrato switch, with the latter just removing the dry signal from the mix. The tweak‑pots are where it gets interesting, giving you access to the input impedance (match the Original circuitry, Bright, or a Custom setting); chorus intensity/warmth; the ‘shape’ of the ‘throb’, in the form of Range and Symmetry controls; and the splendidly named Grit, which seems to be a low‑pass filter. That’s already a lot to play with, then, but we’re not done yet because there’s also an external pedal input. You can calibrate a wide range of passive expression pedals to operate the Speed control, like an original Uni‑Vibe, or use a footswitch (latching or momentary) to switch between two different modulation speeds, complete with Leslie‑style ramping up and down if you want.

In an era of do‑it‑all modulation effects, not everyone needs or wants the very specific palette of Uni‑Vibe tones. But when you do there may be no more convenient way of getting there than with a Vibe Machine v3: the classic sound in a compact enclosure, with true bypass, remote control and almost infinite tweakability.

When originals and clones can vary so much, choosing a Uni‑Vibe‑style pedal is a highly personal and subjective matter — but I’ve yet to hear one better than this.