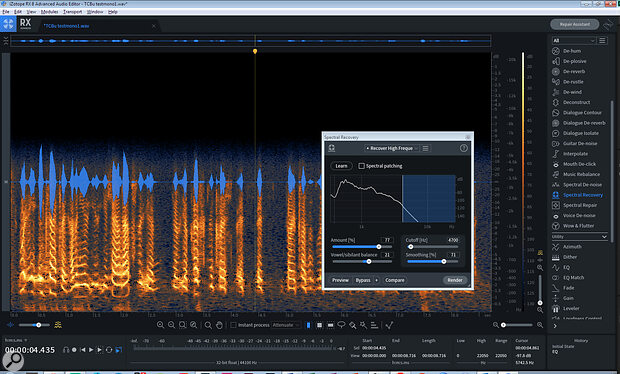 The spectral recovery facility, shown before and after, revealing the synthesized HF components. 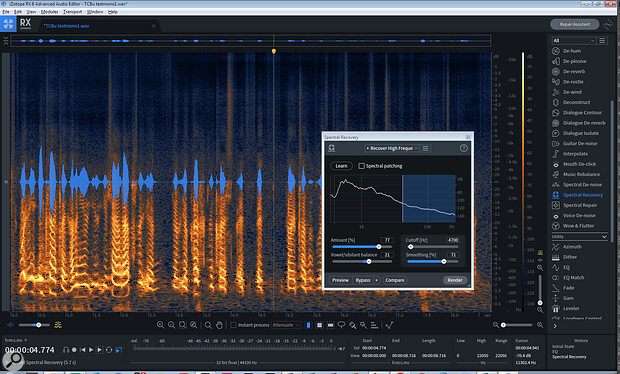 Once again, iZotope have raised the benchmark for affordable audio restoration.

In RX8, iZotope’s boffins have found yet more ways to enhance their remarkable audio restoration software: not only have they upgraded four processing modules, but they’ve created three brand‑new ones. As with previous versions, there are three editions, the simplest and most affordable of which is Elements, and the most fully featured Advanced. Nestling between the two is RX8 Standard. All the features and facilities for each edition are listed at www.izotope.com/en/products/rx/features.html#compare, but I’ll quickly explore the main differences.

By my reckoning, RX8 Elements provides 18 functions, including De‑click, De‑clip, (newly enhanced) De‑hum and Voice De‑noise. It also includes iZotope’s clever Repair Assistant, which analyses the audio file to recommend appropriate repair processing solutions; a very helpful facility for anyone who’s new to audio restoration. A horizontal scrolling action in the Spectrogram view, a new feature common to all editions, uses familiar trackpad swiping gestures found in Mac OS and Windows and makes navigating around large audio files so much quicker and easier.

RX8 Standard boasts a more comprehensive 41 functions and processes, including improved versions of Music Re‑balance and De‑hum. As before, this version can have multiple audio files open in separate tabs. These can be overlaid and processed simultaneously in Composite View: previously, this was limited to 16 tabs but RX8 allows 32, which should appeal to those working with large multichannel projects such as multitrack classical recordings, or surround‑sound formats like Dolby Atmos and HOA. A new feature that’s not included in Elements is the Guitar De‑Noise module, and the renamed Loudness Control module, previously only available in Advanced, is now in Standard too. The Batch Processor and Loudness Control modules have also been substantially enhanced. 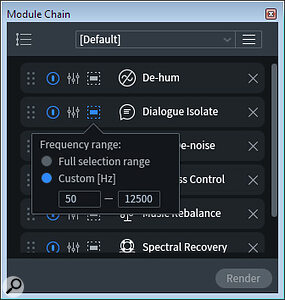 A Module Chain, showing the new frequency range options on individual modules.The horizontal scrolling I mentioned above isn’t the only workflow improvement. Other significant advances stem from upgrades to the Module Chain and the Batch Processor. As before, the Module Chain allows a number of different processing modules (including multiple instances of the same module) to be sequenced to perform complex processing in a single pass. I don’t know if there’s a finite limit on the number of processes, but I built a chain of 24 — far more than anyone could ever need — and it was still happy to add more. The look of this module has been tweaked, but a game‑changing update is the ability to constrain each module to process a specific frequency range. As always, there are loads of factory Chain presets for things like cleaning up vocals, enhancing MP3s, sorting out bedroom podcasts, and much, much more. If nothing else, they make good inspirational starting points for bespoke processing chains, which can be saved and recalled as needed.

Batch Processing also employs the Module Chain, but here the processing is done automatically in the background, allowing other work to continue in the main window. Updates include recreating source file/folder structures for processed output files, and the ability to export processed files simultaneously to multiple destinations with different file formats and settings (WAV, AIFF, FLAC, OGG and MP3 are all supported). For file administration and restoration work suited to automation, the Batch Processor is an enormous time‑saver, and I particularly appreciate being able to save work in different formats and different places in one pass. 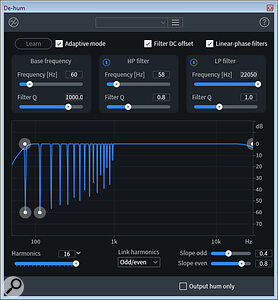 Of the four processing modules to be enhanced, De‑hum looks least different from previous versions. All of the options for selecting linear‑ or minimum‑phase filters with fixed or adaptive tracking modes, as well as the useful DC offset and high/low‑pass filters have been retained, but the Harmonics slider now allows up to 16 notch filters rather than eight, usefully extending the module’s capabilities to deal with particularly buzzy and fizzy hum problems! It’s a very useful and effective module.

The most obvious change to the renamed Loudness Control is a resizeable window that opens to reveal a useful history graph, illustrating the Momentary, Short‑term and Integrated Loudness over time. In addition to True peak and Integrated Loudness targets, there are now sliders for setting the Short‑term Loudness target and Tolerance range, and a button disables the gating element, if required. New presets include options for different music and video streaming formats, as well as podcasting, audiobook and American public radio applications. 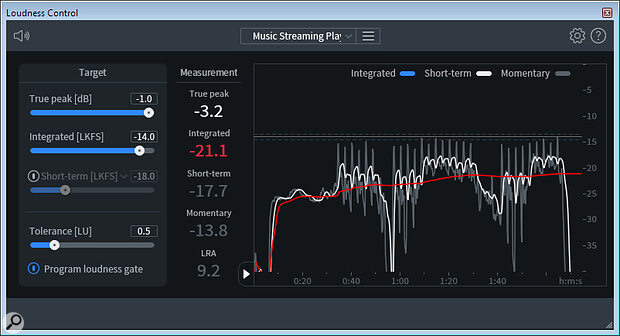 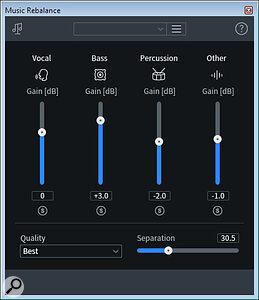 The Music Rebalance facility, with solo buttons on each section.Upgraded algorithms have been implemented in the Music Re‑balance module to improve its source‑separation capabilities. As before, the algorithm identifies and isolates sound elements notionally belonging to the categories of Vocals (main and backing), Bass, Drums and Other. The relative levels of these sections can then be adjusted and a rebalanced mix rendered. This module’s makeover brings new Solo buttons for each category, and a Separate rendering button, which outputs the ‘stems’ to separate file tabs, allowing each category to be processed independently. iZotope have made Music Re‑balance usable as an ARA2 plug‑in, too, allowing the module’s use directly within compatible DAWs.

When used for its intended purpose of modestly rebalancing the core elements of a song, Music Re‑balance works very well indeed, with generally inaudible separation artefacts when using the Best algorithm. However, at high separation settings, the processing artefacts and occasional unwanted bleed‑through elements inevitably become audible, and the bass output lacks anything above 2kHz so can sound rather woolly. So attempts to use the separate stem outputs for a radical remix, for example, could prove disappointing. 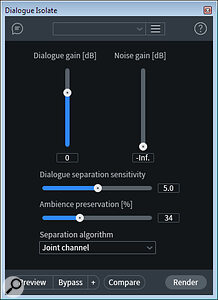 The Dialogue Isolate processor has been given a new ambience‑preservation slider.The Dialogue Isolate module has also benefited from algorithm improvements, to better preserve the background ambience (now controlled with its own slider), especially when using higher noise‑reduction settings.

The brand‑new Spectral Recovery module (only in Advanced) is deceptively simple. This resynthesizes the higher frequencies of speech (above 4kHz) which are lost in band‑limited transmissions like telephone lines or by the lossy codecs used in VoIP applications [see the opening two screenshots]. Like many RX restoration modules, a Learn mode allows the algorithm to analyse the source audio and optimise the processing, but the settings can be adjusted manually too, with controls to set the lower frequency point of re‑synthesized elements, the amount of re‑synthesis, Smoothing (the crossfade between original and synthesized elements), and the vowel/sibilant balance. There’s also a button for ‘spectral patching’ which uses re‑synthesis to fill any spectral holes created by lossy codecs below the limit frequency.

This module is very helpful with conventional phone‑in contributions to a podcast, allowing the voice to sound more natural in comparison with studio voice recordings, while also improving intelligibility. It also did a pretty good job of restoring a convincing sense of air and openness to some low‑rate MP3 recordings and well‑played cassette tapes from the 1970s!

The new Guitar De‑noise module (Standard and Advanced), is designed to clean up acoustic or electric guitar recordings in three ways. The module comprises three individually bypassable processing sections. The first is for cleaning up amp buzzes, the second for reducing string squeaks and fret noises, and the third for softening extreme pick transients. 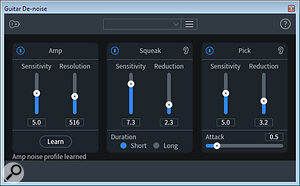 The new Guitar De‑noise processor, with all three processes in use.Essentially similar to the De‑hum module, the Amp section has a Learn button to assess the amp buzz (during a non‑playing section), with a slider to adjust the Sensitivity (how much buzz is removed). A Resolution control increases the number of notch filters from a default 128 up to 1024, to deal with more complex noises at the expense of an increased CPU load.

String squeaks are recognised in large part by their distinctive high‑frequency characteristics, so a Sensitivity control helps the algorithm focus on the squeaks rather than high‑pitched notes. An ear icon auditions only the removed content to make optimisation easier. Buttons offer Short and Long detect modes: the default Short option has a 200ms processing window and suffices for most squeaks; and the Long mode has a one‑second processing window but introduces a lot more latency. A Reduction slider determines the attenuation applied to detected squeaks.

Any processing artefacts are much less distracting than loud finger squeaks in a mix, and pleasing results can be achieved remarkably easily.

This processing is similar in some ways to a de‑esser, and care is needed optimising the reduction of squeaks without interrupting the flow of the music, especially for solo guitar passages. Any processing artefacts are much less distracting than loud finger squeaks in a mix, though, and pleasing results can be achieved remarkably easily, especially if short sections are processed individually rather than running a generic setting across an entire track.

The Pick section is a kind of transient‑designer‑cum‑compressor focussing on excessively large pick transients. Again, an ear icon to audition just the removed content helps in optimising the Sensitivity and Reduction sliders, while an Attack slider shapes the processing response to individual transients. 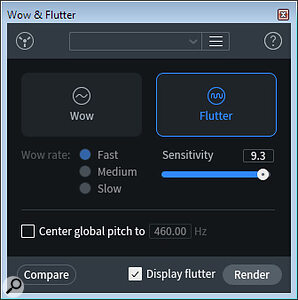 The Wow & Flutter control window.For many, the most exciting new feature is the Wow & Flutter module. Removing wow and flutter is an extreme technical challenge and professional restoration solutions, such as the Plangent Process, Cedar Audio’s Respeed, and Celemony’s Capstan, are expensive. Compared with these, iZotope’s Wow & Flutter module is simpler and less versatile. The Flutter processing works only on tracks of up to 10 minutes (40 in Wow mode), so longer material must be divided into sections to be processed individually. Also, the module can’t be used in the Module Chain, which rules out Batch Processing, or in Composite View.

Buttons configure the algorithm to process either Wow or Flutter, and if Wow is chosen, select the rate: fast (2‑8 Hz), medium (0.5‑2 Hz) or slow (below 0.5 Hz). To select the correct mode you might first need to examine the spectral display to find the inverse of the wow duration. The Flutter mode handles speed variations in the 8‑40 Hz range. Finally, a Sensitivity slider determines how firmly the system corrects detected pitch variations; lower settings reduce the risk of removing musical vibrato.

Detected wow or flutter pitch variations can be shown (and heard) as a trio of horizontal wobbly lines running across the spectrogram at roughly 400Hz, 1.2kHz and 3.6kHz. This feature is purely intended as a diagnostic aid to visualise/auralise any detected speed variations. Sadly there are no facilities to manually manipulate this detected pitch contour, but there is a function to adjust the overall track’s base pitch relative to a specified frequency, to correct media under/over‑speed. The default is 440Hz, with range of 400‑460 Hz.

All editions of iZotope RX have become yet more impressive than their RX7 equivalents. Guitar De‑noise can fix problems in a single pass that previously required several more complex processes; and Spectral Recovery achieves in an instant what once required time and effort with spectral editing; and while the Wow & Flutter tool lacks the adaptability of more costly alternatives, it is effective in straightforward applications and a welcome addition. Importantly, RX remains pleasingly simple to use.

With a range of thoughtful module and workflow improvements, and four brand‑new functions, iZotope have again raised the benchmark for cost‑effective audio restoration tools.