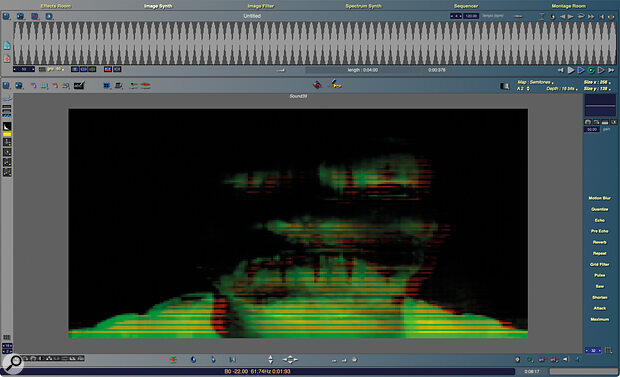 This image started out as a picture of my face. After stretching, inverting, filtering and remapping the left and right channels to different harmonic scales, the result sounds as frightening as it looks. Well, it was Halloween!

Now in its third decade, MetaSynth is still a synthesizer like no other, and its companion sequencer Xx follows the same path...

MetaSynth has been an open secret in the music industry for nearly 25 years. It is famous for its Photoshop‑like tools, which allow you to paint with sound. You may have heard of some of its more famous users, like Aphex Twin, who turned a picture of his face into fascinating noise in a song called ‘Formula’, a B‑side to his 1999 single ‘Windowlicker’. It was also allegedly used to create the ‘bullet time’ sound effect in The Matrix movie. Over the years, MetaSynth has expanded its bag of tricks, and the latest version — alongside its Xx companion — boast multitracking, MIDI sequencing, mixing, and plenty more.

MetaSynth might be one of the hardest things I’ve ever had to describe. It is, in essence, a collection of tools used to create and manipulate sound. Other applications would fit that description — audio editors, synthesizers, samplers, and DAWs. MetaSynth shares elements of these and yet is nothing like them.

Welcome To The Metaverse

MetaSynth and Xx are separate applications available exclusively for the Macintosh platform. MetaSynth is a synthesizer, although it doesn’t behave or look like any synth you might have encountered before. Xx is a MIDI sequencer that can also play MetaSynth instruments.

MetaSynth’s main trick is its ability to turn images into sound. But it has several other specialities. These skills are known as ‘rooms’. A room is a tab on the interface dedicated to a particular working method, and there are six: Effects Room, Image Synth, Image Filter, Spectrum Synth, Sequencer and Montage Room.

Image Synth is the room for which MetaSynth is best known. Here, you can see a canvas on which you can use Photoshop‑like tools to draw and manipulate imagery. The vertical axis represents frequency whilst the horizontal axis is time. You can import any picture in this canvas: your face, a sunset, or perhaps the Sound On Sound logo (it made a sound like an enormous laser beam!). Each pixel will trigger an oscillator with brightness dictating amplitude and colour setting the stereo position.

Programming drums in Image Synth can look a lot like a cubist masterpiece. Yellow colours are panned centre, red is left, green is right, and the blue drums are on another layer.

Importing pictures isn’t the only way to create sound. There is an impressive suite of image editing tools for drawing directly on the canvas or processing what is already there. For example, you might draw simple lines for a sustained note, then to cause the note to rise or fall in pitch, you might tilt the layer a few degrees (much like any image processing software, you work in layers to keep things manageable). Or you might draw a filled triangle using the shape tool, creating a drum‑like sound with harmonics tailing off as the play head moves towards the triangle’s point. You can spraypaint pixels, which sound like the audio equivalent of fairy dust, or draw in chord shapes and then smear them to create melodic drones. It is great fun and a surprisingly intuitive way to work with sound.

MetaSynth’s built‑in synthesizers generate the actual sound (the image itself is more like the sequencer). These are simple, efficient synths optimized for high voice count, as an image can create thousands of voices. There are five synths to choose from, and they cover most basic synthesis techniques, including wavetable, granular, FM, phase distortion, sample and multi‑sample playback. They generally consist of just an oscillator, perhaps an LFO and some simple effects. When dealing with such a high number of voices, you don’t need a super complex synth engine.

MetaSynth’s rooms are connected by an audio sample buffer. The top of the screen shows an audio waveform into which you can record audio, load from disk, or render audio from the current room. Think of it like a dentist’s waiting room. Your audio can sit in the waiting room, go into the dentist’s room to have work done, come back to the waiting room, and then visit the hygienist in a different room (trying not to bleed on the floor if possible). It’s the same set of teeth being worked on in different rooms.

Similarly, you can load in a WAV file, apply some effects in the Effects Room, render it back to the sample editor, and then transfer it to other rooms for further processing. Once you have a loop or sample that you like, you can render it to the current project sample pool (or WAVs on disk) to be sequenced in the Montage Room or used in other applications. The Montage Room can also use images from the Image Synth and Spectrum Synth or sequences from the Sequencer without rendering them first. 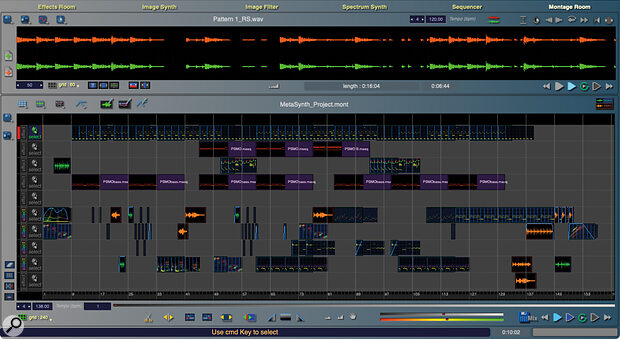 The Montage Room is where you can arrange audio files, images, sequences and audio tracks.

Returning to the Image Synth, there’s more to explore. For example, you can convert an audio file from the sample edit area into an image. This resynthesizes the audio allowing you to manipulate the image in fantastic ways. You can stretch it, blur it, tilt it, invert it, flip it, filter it, quantise it, or displace it. The options are dizzying. And because every pixel represents a specific frequency, you can even quantise it to a particular key and scale. Custom tunings are supported via Scala...