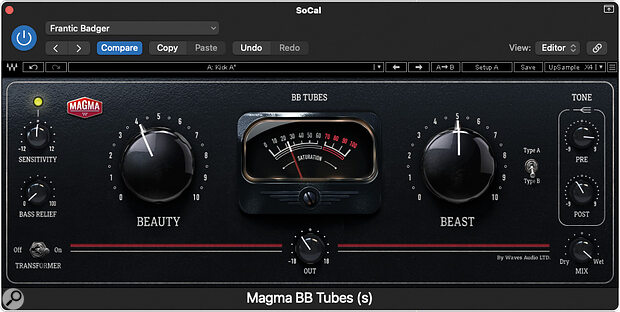 Part of Waves’ Magma series, BB Tubes presents the user with two large saturation controls, one entitled Beauty and one called Beast. As those names imply, this deceptively simple plug‑in has been designed to blend ‘nice’ and ‘nasty’ saturation any way you need it. Its purchase also includes a licence for the even simpler Lil Tube, which is installed alongside it.

Turning Beauty clockwise adds mainly even harmonics and is designed to provide smooth‑sounding harmonic saturation, for when you need warmth and fatness without obvious dirt, and it can add analogue‑style ‘warmth’ to a stereo bus or mix, as well as to individual sources. Beast, on the other hand, adds mainly odd harmonics, and is capable of a much more obvious and assertive saturation, for occasions when you need something more aggressive‑sounding — adding some ‘life’ to drums, for instance — but it is designed so as to keep the resulting signal sounding tight and dynamic, even when pushed hard. Pull back the drive, and it can also produce more subtle results.

There’s an A/B switch to select between two different emulated tube types, with different harmonic profiles, and there’s also a transformer model that can be switched in or out. The option is handy, of course, but I invariably preferred the sound with it left in, and even with the two tube saturation knobs turned right down, this transformer emulation still adds its own magic when turned on.

You also get pre‑ and post‑saturation high‑shelf EQs, with further controls for Sensitivity (complete with tri‑colour LED‑style metering) and Bass Relief, the latter controlling the amount of bass that is excluded from the tube saturator, courtesy of a 350Hz low‑shelving filter. This is compensated for at the end of the chain, and by reducing some low‑frequency information from the tube input signal, the bass can appear more articulate, with a stronger focus. An output level and a wet/dry mix knob complete the control set, while a moving‑coil‑style meter indicates the amount of saturation taking place. I found the output control to be important, since the distortion inherently increases loudness — you do need to balance the processed and bypassed levels in order to make a fair evaluation of the effect.

BB Tubes requires Waves v14 to run, so owners of long‑in‑the‑tooth Macs will want to know that I had to abandon my 2012 Mac Pro (with its Mojave OS) and move onto my M1 Mac Mini to use this plug‑in. Having installed it, I initially wondered why I couldn’t find it in my plug‑in list. I was initially looking in the ‘B’ section for ‘BB Tubes’ but it turns out that it’s listed as ‘Magma BB Tubes’.

The only real downside isn’t with BB Tubes itself but the user’s likely temptation to use it on just about everything!

Using the Beauty saturation on a stereo mix or mix bus can give the production a subtle but convincing analogue sheen, but for the most dramatic effect the plug‑in needs to be applied to specific instruments and voices. Vocals can be pushed forward by blending a little Beauty and Beast, while dialling in more Beast can work magic on drum tracks and loops, its added harmonics helping otherwise dull snares to sound really ‘authentic’ while also making kick drums and toms punch through more strongly. Bass guitars can also be energised too, as indeed can lead guitar parts.

The only real downside isn’t with BB Tubes itself but the user’s likely temptation to use it on just about everything! Mixing is all about light and shade, and it takes discipline to accept that some parts of a track simply need to sit back in the mix so as to leave space for those you want to sound up‑front. Bear that in mind, and this very addictive saturation plug‑in will find many uses in all sorts of productions.