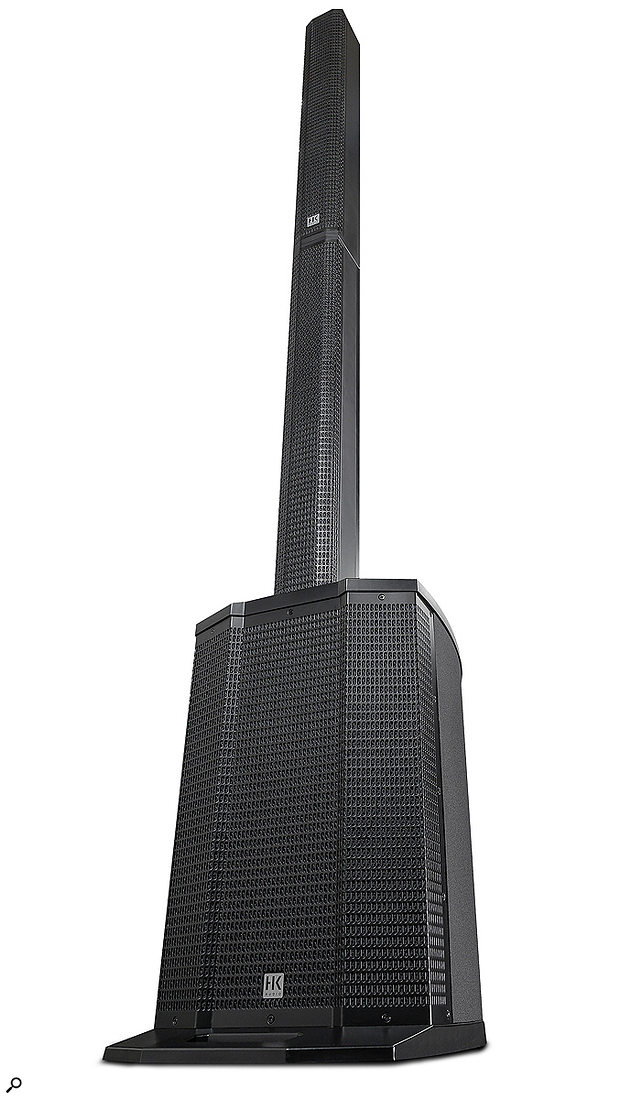 HK's PAs don't normally come cheap, but their newest rig is surprisingly affordable, and maintains the high quality for which they're known.

Since HK Audio first introduced their Elements system, the mini–line array format has grown massively in popularity, with many manufacturers now delivering their own take on the concept. The Polar 10 is a lower–cost, stand-alone system based on the same principles. It's mono, though there's no reason not to buy two to use in stereo. It adopts the familiar stick-on-a-sub format, where the sub houses all the electronics including a four-channel digital mixer that can accept a stereo analogue input as well as Bluetooth music streaming for playback via aux channel 4. Bluetooth v5 is supported — though only for inputting audio, not for remote control, and any stereo signals sent to the aux channel are summed to mono.

Though very competitively priced, the Polar 10 is very solidly built and is powered by 2000 Watts of Class–D amplification, with comprehensive electronic protection: the use of Class–D technology reduces both weight and heat dissipation. The system's quoted frequency response is 38Hz to 20kHz at the -10dB points, and maximum SPL capability is 126dB. My practical tests showed it to be plenty loud enough for typical pub gigs. I'm also happy to report that a gig bag for the two column sections and a cover for the sub are included in the price.

The sub itself, which is ported, is fabricated from both birch ply and ABS plastic, and houses a 10–inch, long-excursion woofer with a two–inch voice coil, protected by a steel grille covering the whole of the front of the enclosure. The front lip of the cabinet base extends outwards to add to the stability of the assembled system, and has a handle-shaped cutout which can be used along with the cabinet's top bar handle when lifting. At 21kg it is fairly easy to manage. The mixer control panel, which has a small monochrome LCD window at the top, is recessed and slopes slightly toward the rear to protect the controls from damage. Both the power switch and IEC mains socket are on the rear panel.

As is now very common, the column splits into two sections for transportation, the bottom one being a spacer and a conduit for the electrical connections between the sub and the top section, which houses the speakers. The upper speaker section weighs just under 4kg and the spacer half that. In this system there are six mid drivers, all three inches in diameter with 0.75–inch voice coils and neodymium magnets. The fourth-order crossover with the sub is set at 180Hz. A horn-loaded, one–inch tweeter with a one–inch voice coil handles the extreme highs. Horizontal dispersion is specified as 120 degrees, with the vertical dispersion a tight 30 degrees, so you get good coverage without wasting energy on the ceiling.

Fully assembled the system stands at 213cm, but you can plug the speaker section directly into the sub without using the spacer in venues with restricted height or when setting up on a raised stage. As with the Elements systems, the connector itself is based on the design of a quarter–inch jack plug and socket. Four steel bars built into the fittings locate the column components, which adds to the strength of the joints. Both column sections are made from a tough plastic with steel grilles backed by acoustic foam.

The four-channel mixer offers two mic/line channels, one high–impedance instrument channel, and one aux channel with phono inputs that can sum a stereo feed into mono, or route it correctly to a pair of linked systems set up for stereo operation. Both of the mic/line channels have XLR/jack 'combi' connectors (though there's no phantom power option), while the instrument channel uses a quarter–inch jack. In addition to the aux channel's RCA phono inputs, it can also be set to receive Bluetooth playback — and it can even do so at the same time as using the phonos, though the Bluetooth signal level would need to be adjusted at source in order to balance it with the aux input if you need to use both sources together. Unlike some competing products, there's no Bluetooth remote control option, which helps keep the price down. A balanced XLR output lets you add an extension speaker, a powered monitor, or link the rig to a second system for stereo. 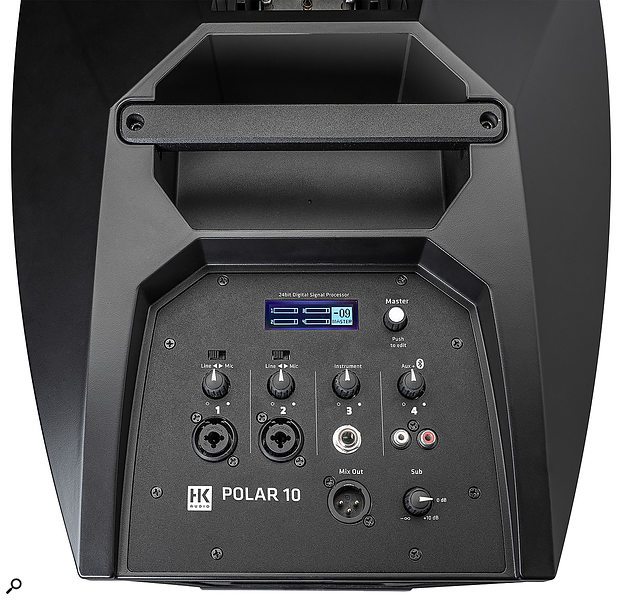 The physical controls are limited to mic/line switches (on the first two channels), channel levels, sub level, and a rotary encoder control with an integral push–switch next to the display. By default this acts as a master volume control, but it also gives access to system presets, a three-band master EQ with a swept mid control, and a few other parameters. There are three EQ profile modes called Music, Voice and DJ, which are independent of the master EQ, and the user can store and name up to five presets. There's also a delay line, for distributed systems that require time alignment. This allows delay to be set up by entering the distance between the speakers in metres, with a maximum setting of 100 metres. Parameter values are shown in the display, which also acts as a four-channel level meter with overload indicators. After eight seconds of control inactivity, the control mode switches back to master volume duties.

Vocals and instruments come across with the kind of mid-range detail that many two-way powered boxes simply gloss over.

The system takes only a few moments to set up, and the column feels relatively secure thanks to the sub's recessed connector and the reinforcement provided by those steel bars. The mixer is fine for basic jobs, but for anything more sophisticated an external mixer (or maybe a separate vocal processor) would provide more features such as low-cut filters on the vocal channels, independent channel EQ and the ability to add effects if the mixer has them. There's no built-in reverb here, no phantom power and no independent channel EQ so the mixer is fairly utilitarian.

Having got out of the way what the mixer doesn't have, there's a lot to like about the Polar 10 and I suspect that most users, other than perhaps some solo artists and duos, will employ a separate mixer anyway.

We've come to expect a certain level of performance from anything with the HK Audio name on it and the Polar 10 doesn't disappoint. Tested first of all with recorded music, the sound is punchy without being flabby, and the system goes loud while remaining very faithful to the material being fed into it — the effect is more like a loud hi-fi than a PA, which is a characteristic shared by many similar–format mini line–array speakers due to the smaller drivers being better at handling the crucial mid-range. I set the sub at its default position as marked on the pot and the balance seemed about right, though I did trim 3dB off the treble control to smooth out the highs. (In a larger venue, though, the highs would probably be fine set flat). That 10–inch sub really pulls its weight but, equally importantly, vocals and instruments come across with the kind of mid-range detail that many two-way powered boxes simply gloss over.

Another advantage of mini line arrays is that their wide dispersion angle means you can position them in such a way that you can hear yourself without recourse to monitors, and resistance to feedback is excellent unless you set up the mic right in front of the speaker — and those characteristics are very much in evidence here. Stand a little to one side and there's loads of level on tap before the dreaded howling starts (unless it's from the audience of course!). The three voicing settings are pretty much what you'd expect, with the Music setting being the most natural. Vocal is also natural but with the lows trimmed back, and DJ adds a 'smiley–face' curve to add lows and highs while scooping the mids.

I have to admit that this system costs rather less than I expected based on its performance, so even if you do need to buy a small mixer for the kinds of shows you'll be doing, it still won't over-stretch the budget. It plays very cleanly up to surprisingly high levels without succumbing to boxiness when the going gets tough, though for a band with drums, two systems would be better than one. In smaller pub venues where the drums are probably too loud even without being miked, a single Polar 10 will deliver the goods and carry the vocals and instruments in style. It's also a perfect fit for smaller ensembles without drums who need something visually non-intrusive that can deliver a natural, full-range sound over a wide area with the minimum of fuss. Given the bargain price and the fact that bags and covers are also included, I can't see anything not to like.

Though the system lacks effects and the remote control that some products offer, its performance/price ratio more than makes up for that.