HK Audio’s Gala is the latest compact stereo line‑array system in the HK Elements series, comprising two floor‑standing, dual‑section columns and a 15‑inch woofer. As is the norm these days, the amplifier pack is Class D and includes a DSP system controller to handle the necessary crossover and filtering duties, as well as implementing a 24dB/octave subsonic filter plus both peak and RMS multiband limiting. Because of the line‑array format, the horizontal dispersion is quoted as 70 degrees while the vertical dispersion is much narrower, helping to direct the energy where you most need it. Some line arrays specify a wider angle but there were no coverage problems with this system in practice. 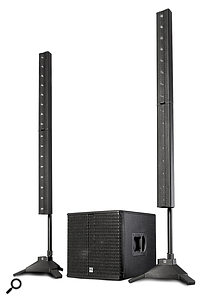 Unpacking the boxes reveals four identical E835 column sections, plus two heavy EF45 bases, the Gala Sub15 subwoofer, two EP2 short telescopic speaker poles (just over half a metre maximum), and a pair of Speakon cables to connect the tops to the sub via connectors on the bases. There are also connector covers, four plastic wedges and a locking mains cable. The sub houses all the necessary electronics. The total system weight is 55.6kg.

The columns can be mounted directly on the bases but, where height permits, using the poles to raise the columns off the ground is a good idea if you’re not already on a raised stage, otherwise the lower drivers will be pumping sound into the legs of the audience. A built‑in E‑Connect signal bus provides the link from the base to the column components (via the pole if used). Each EF45 base incorporates two parallel Speakon (NL4) connectors and an E‑Connect docking port for the lower column or pole.

HK Audio’s spec sheet explains that the total amplifier power is 670 Watts RMS (2000 Watts peak), producing a peak SPL of 129dB at one metre. A system frequency response of 44Hz to 20kHz (‑5dB) is quoted. The columns, each containing eight 3.5‑inch drivers, lock together in pairs, each section measuring 11 x 74.5 x 12 cm (minus the connector sleeve) and weighing just 4.5kg each. A release button allows the columns to be separated. These columns are made from aluminium extrusions with perforated metal grilles protecting the drivers.

The sub, which has a very solid MDF cabinet, is the largest and heaviest part of the system, measuring 48 x 48.5 x 59.5 cm and weighing 30.2kg. This is finished in a tough textured‑acrylic enamel, and its driver is protected by a perforated metal grille backed by a layer of acoustic foam. Two HK ‘MultiGrip’ handles set into the sides make it an easy two‑person lift. All the connections are on the sub’s metal rear panel: stereo audio inputs on a pair of balanced combi XLR/jacks, two balanced XLR thru ports to feed additional powered speakers, and Speakons to feed the columns. This isn’t one of those systems that includes a basic mixer so an external mixer is essential.

An EQ switch on the sub’s rear panel optimises the sound for short‑distance or long‑venue applications. By default, an energy‑saving auto‑sleep mode comes into action when the system has not been fed audio for 350 minutes, but there is no auto‑wake equivalent, so if your system is asleep, it needs to be powered down for at least five seconds to wake it. If this is inconvenient you can disable the auto‑sleep mode using the small switch above the power button. 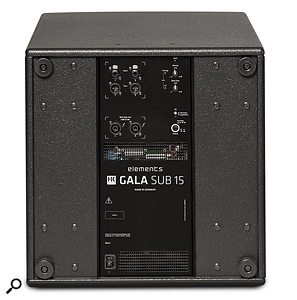 The subwoofer houses all the system’s electronics, and provides independent sub and top level adjustment, as well as a switch for selecting between short‑ and long‑throw modes.Speakon connectors are built into the column bases, fed from the sub via the included cables, and there are separate Master and Bass gain adjustment knobs on the sub’s control panel, so the sub’s contribution can be balanced to taste. The crossover frequency is 140Hz and separate limit LEDs are provided for the sub and the mid/high amplifiers.

The low‑end power of the system can be further extended by adding an optional L SUB 1500 A. There’s also a five‑year warranty, which is very welcome, as are the optional gig bags for the tops and roller bag for the sub — though on a system of this price I feel that bags for the tops should have been included, as transporting the columns without bags is just asking to get them scratched.

Our practical test took place in a large tent‑based performance space at Malvern’s annual West Fest — the stage hosting anything from solo performers, poets and pop bands to choirs and ukulele groups. The Gala’s column bases are reassuringly heavy and have extendable legs to help spread the load, though we still felt it necessary to secure the columns using safety ties as we were working on a grass surface. We also put a couple of sand bags on each base as the structure becomes a little less secure when the pole is inserted to increase the column height, especially on an imperfect surface. This would have been far less of a concern on a flat floor or stage, of course, though you still need to consider the outcome of somebody walking into one of the columns, especially at pub gigs where there’s usually no barrier between your kit and the audience.

Even with the pole fitted and at maximum extension, some of the sound from the lower speakers will be aimed lower than is ideal in smaller venues where the audience is very close, but that is an acceptable compromise given the practical benefits of the system.

Setup proved to be quick and painless, as the fixed jack‑based E‑Connect connection system eliminates a lot of wiring. Separate plastic wedge pieces are provided to slot between the two column sections to stop the upper one rotating, and though you have to take care not to lose these, two spares are included.

Sonically, the system exhibits exceptional clarity and a usefully wide coverage angle. The mid‑range handling of the small drivers is particularly kind to voices and acoustic instruments, and we received a lot of very positive comments about the sound. Recorded music sounds very clear and well‑balanced over the system with no need to EQ. There’s also plenty of punch from the 15‑inch sub, which feels altogether more serious than the subs provided by most other compact mini line‑array systems.

By way of volume, the Gala matches many 12‑inch box systems on SPL, and in smaller venues offers the additional benefit of not blocking the sight lines in the way typical box speakers do. The wide dispersion also helps reduce the risk of feedback. While not the cheapest mini line‑array out there, the HK Audio Gala is a serious system designed to do real work.

If you want to spend more, the Fohhn systems are excellent; if you need something less costly then the LD, RCF and Peavey systems are worth a look, as is the smaller HK Lucas system.