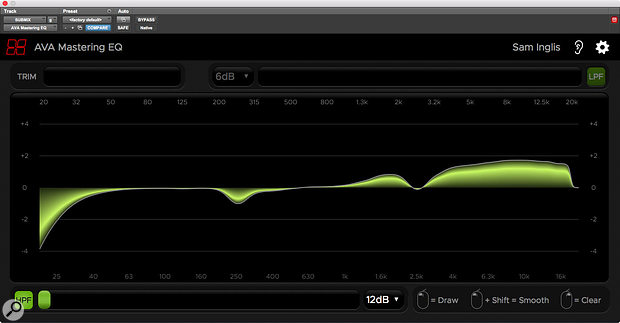 Originally best known for their large-format mixing consoles, Harrison have been diversifying in recent years, and their Mixbus editing and mixing program has found many adherents. They’ve also launched a range of inexpensive cross-platform plug-ins under the AVA sub-brand, including an equaliser designed specifically for mastering applications.

You could understand the AVA Mastering EQ as a modern interpretation of the traditional 31‑band graphic equaliser. It has 31 bands, it equalises, and it has a graphical interface that reflects what it’s doing to your audio; but it looks, feels and sounds quite different to the EQs of yore. Rather than moving 31 individual faders one at a time to create an EQ curve, you simply position the mouse somewhere over the main window, click and drag. As the mouse pointer moves across the bands, they jump into position and a curve is thus automatically created. If it looks or sounds too ragged, dragging with the Shift button held down applies a very natural smoothing, while right-click and drag erases an existing curve.

Functionally, AVA Mastering EQ is unlike a traditional graphic EQ in that adjacent bands interact, so if, for example, you boost a number of bands by 3dB, what you’ll see and hear is a flat 3dB shelf boost across those bands, rather than a series of peaks. There are also adjustable high- and low-pass filters and a global Trim control variable over a massive ±20dB range.

From a sonic point of view, AVA Mastering EQ has the qualities you’d expect: it’s clear, neutral and transparent. This alone doesn’t single it out from other digital equalisers; what makes this one different is the sheer speed with which you can create a fairly complex EQ curve. For example, I often find that I want my master bus EQ to present a broad shelving boost from perhaps 1.5kHz upwards, but with dips at specific frequencies such as 2.5kHz and 200Hz. This usually requires setting up three or four bands on a typical parametric EQ, each with its own Q, gain and frequency controls, but on AVA Mastering EQ, it can be achieved with a couple of quick glides of the mouse pointer.

I’m not sure I’d want this or any other graphic EQ as my only equaliser, and its mastering credentials are perhaps undermined by a complete lack of signal metering, but its simplicity makes it a very worthwhile addition to any toolkit.