We put this compact new system from HK to the test at a festival stage in Malvern.

HK Audio’s new Pulsar speakers sit higher up the company’s range than their Premium Pro models, but are still priced well below the more esoteric HK offerings. The typical street price of the system reviewed here is under £2000, yet it can deliver in excess of 2.5kW. Though 10-, 12- and 15-inch tops are available, we chose to review the 12-inch PL112FA teamed with a single PL118 Sub A 18-inch active subwoofer. I expected a 15-inch sub also to be available, but currently the PL118 Sub A is the only sub in the range. As usual, covers are available separately — how I miss the days when all amps and speakers came with covers rather than them being offered as optional extras!

The cabinets are built mainly from MDF and particle board. Manufacturing is carried out in Germany with the aid of CNC machinery, and the finish demonstrates HK’s usual attention to mechanical precision. All the wood parts are finished in a textured, scuff-resistant acrylic paint, and impact-resistant epoxy strips protect the cabinet edges. A dual-angle pole-mount socket is fitted into the base of the mains, giving a choice of three or seven degrees of downwards tilt. There are occasions on which I’d prefer a straight-ahead mode, however, such as in the extremely long festival beer tent in which the practical part of this review was conducted. Rigging points (M8 thread) are also included for more permanent fixing. The sub includes an M20 threaded pole-mount in the top face and has shallow plastic feet on the base. Both the tops and the sub have perforated metal speaker grilles as well as inset carry handles (four for the subs and two for the mid/tops). All the Pulsar speakers incorporate digital controllers, switching-mode power-supply circuitry and Class-D amplifiers designed to provide plenty of headroom with the minimum of weight and heat. 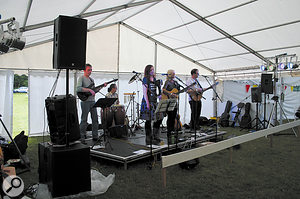 The Pulsar PL112FA is powered by a total of 1000W, of which 350W is sent to the one-inch, constant directivity, horn-loaded HF unit, and 650W to the 12-inch LF driver with its two-inch voice coil. All the connectors and controls are on the recessed rear panel and the handles are moulded plastic-bar types recessed into each side of the box. The cabinet, which narrows towards the rear, measures 380 x 660 x 370 mm overall and weighs a manageable 19.7kg. 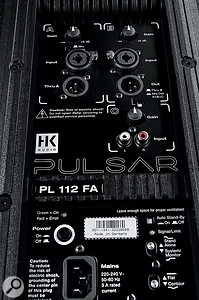 The PL112FA features three inputs; two on XLR and one on stereo phonos (summed to mono). Both of the XLR inputs have thru connectors, though the thru on the second channel can be switched to pass on only the channel input signal or the mix of all three inputs. There’s a separate input gain control for each of the two XLR inputs and there are also EQ voicing switches for configuration as a monitor, a flat-response system speaker or a ‘smile-curve’ DJ speaker. The first XLR input can be switched to operate at mic or line level by means of a recessed push switch. 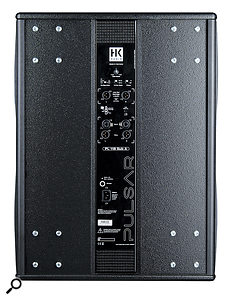 The subwoofer has stereo inputs and thru outs, as well as high-pass-filtered feeds intended to connect to your mid/tops.The on-board DSP controller looks after the crossover duties, driver tuning and limiting, and there’s a power-saving auto-standby mode (which can be turned off). On-board protection guards against under-voltage, thermal, short circuit and over-current conditions. There’s also a subsonic filter to keep out excessive low frequencies. Note, however, that unlike some active speakers in the HK range, there’s no facility for powering a second passive speaker from an active one.

Sub Be Good To Me

The PL118 Sub A is a heavier proposition altogether, measuring 525 x 690 x 691 mm and weighing in at 40.5kg — it really takes two people to carry it safely. The 18-inch driver, which has a hefty three-inch voice coil, is powered by 600W of Class-D amplification, and the cabinet is described as having a hybrid design combining a bass reflex port with a resonator chamber. It includes an active crossover switchable from 100 to 120 Hz, with fourth-order high-pass outputs to feed the tops. The sub has a -3dB point at 44Hz and -10dB at 35Hz. The maximum SPL is 125dB (half space), and the same comprehensive protection is built in as for the mains. There’s a sub level control, and the connections are all on XLRs providing stereo inputs, stereo thrus and stereo high-pass filtered feeds. A polarity invert button is fitted along with a voicing switch to compensate for when two subs are used in a stack.

The field test was carried out, quite literally, in a field at Malvern’s West Fest, where we had a huge beer tent set up that could accommodate several hundred people and also provide refuge in the event of rain. As far as the speakers are concerned, this would constitute a more demanding test than the more usual indoor scenario, where you have a solid back wall. The outdoor stage was served by an HK Contour system provided by my colleague Neil Collins, and that comprised just one top and two subs per side. It sounded impressive. Our beer tent was the location of the second stage, and we alternated acts between the two stages to ensure an uninterrupted flow of music from start to finish. We set up the stage with the Pulsar system facing down the length of the tent, augmented by a couple of side-fills and a couple of floor wedges. I handled the mixing using my Mackie DL1608 iPad-controlled mixer so that I could check out the sound from different locations (this also saves having to rescue a multicore from the mud in the event of rain!).

Power came from a generator, which in the case of this stage also powered beer coolers. This is always challenging for a speaker with switching-mode PSUs, as any heavy current surges generated when these things switch on and off can trigger the under-voltage protection in some systems, as we discovered last year. Systems with analogue power supplies are usually more forgiving. However, we needn’t have worried as the Pulsar system remained rock solid all day. I set the bass crossover point to 100Hz.

The bands varied from acoustic duos to a pretty lively seven-piece outfit, and we worked with a mix of electric and acoustic instruments. My fellow sound engineer commented that the Pulsars had a very musical sound with good definition in the mids and highs, and I’d have to agree. Many PA systems sound distinctly disappointing in the mid-range when you try to play pre-recorded music through them, but this one sounded extremely well balanced, and though it couldn’t match the Contour system for sheer volume, it gave a similar impression of clarity. I was also surprised at the depth of bass when the tops were tested on their own in full-range mode for recorded music playback — and these were just the 12-inch tops; the 15s must pack quite a wallop. 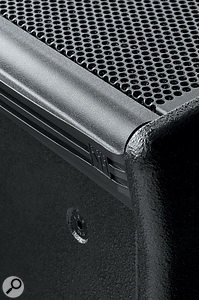 All the speakers in the range enjoy the same wooden construction with textured black-paint finish.The Pulsar sub handled bass guitars, percussion and double basses without any apparent effort. While maybe not quite as tight-sounding as some of the really high-end subs I’ve worked with, that combination of bass reflex port and resonator chamber succeeded in delivering a well-controlled sound without excessive bass smearing — a performance that would be hard to beat at this price. In fact with the system set flat I found that the bass contribution was, if anything, a little over-generous and with enormous depth, so I found myself juggling the low-cut filters on the mixer to rein it in a little.

Equally there was no shortage of level, and the feedback threshold for the vocal mics (which was pretty high anyway since we were in a non-reflective space) was reached well before the system ran out of steam. Not only that but the ‘throw’ of the sound was also pretty good; everything was still loud and punchy enough at the back of the marquee.

Of course, there’s plenty of competition in this price range, but given the choice I’ll always pick a wooden-box speaker over a plastic one for 12-inch speakers and above, as they almost always sound cleaner and tighter. I already own and operate a pair of HK Premium Pro speakers, which I’ve always felt did a good job, but these Pulsars sound even better to my ears, yet they are still very competitively priced. If you don’t need the sheer power of the Contours but appreciate quality sound with an adequate helping of quantity, then you really should take a look at the Pulsars. Seriously, I expected them to cost rather more than they actually do, especially when you look at the typical street price.

The main rivals of a similar price would probably include the likes of QSC, and Mackie’s wooden-box systems.

At the price I can’t fault these speakers. The sound quality is very high and there’s enough power on tap for most venues that don’t already have their own sound systems.