With the tiniest bit of DIY, this could banish the gremlins from a ‘floating’ recording setup.

A lot of mains-powered portable audio and computing equipment employs Class-II or ‘double insulated’ power supplies, often courtesy of wall-warts or ‘line-lump’ power adaptors. Although there’s no direct connection to the mains earth, that isn’t a safety issue here, simply because there’s no risk of exposure to a faulty live supply. However, the absence of a direct earth connection renders the electromagnetic screening around the equipment pretty useless. And that means that hums, buzzes and other unwanted noises often become problematic. Clicks or splats can also occur when the equipment is touched, and occasionally a light tingling sensation might be felt when touching the equipment.

In equipment with a mains safety ground connection (Class-I), electromagnetic interference gets ‘caught’ by the screens of the connecting cables and the equipment’s metal enclosures, and is diverted straight to ground, away from the sensitive electronics. If there’s no safety ground connection, that interference has nowhere to go and gets combined with your audio signals. This can arise easily when, for example, a guitar or mic is plugged into an interface and laptop or compact recorder (all of which are typically powered from Class-II supplies), and monitored on headphones. The whole system is said to be ‘floating’. Such systems can often be grounded by connecting the interface outputs to active speakers, since most of these are Class-I devices, but that’s not always a practical option. The alternative is to arrange a dedicated ground connection. 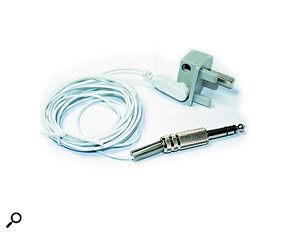 The modified Groundology UK plug.I recently discovered a neat, safe, convenient and affordable solution — although a simple DIY modification is required. Groundology manufacture and sell a range of products aimed at people who believe in the benefits of being ‘personally grounded’. I’ll say no more about that particular concept here! However, their range includes moulded mains plugs with non-conductive live and neutral pins, but a conductive metal earth contact. Specific models are available for the UK, Europe, Switzerland, Italy, South Africa and Australia, and an international kit includes an American style plug too.

The mains earth connection is accessed via a pair of sockets on the plug body. Frustratingly, these are slightly larger than standard 4mm banana plugs, but extension cables with a suitable moulded plug are available in a variety of lengths and styles. The three-metre extension cable I bought was terminated in a moulded socket, and this must be replaced with a connector more suitable for connection to the ungrounded recording equipment, typically via the audio interface. The choice of connector is not critical and really depends on what unused connections are available. I’ve found a TRS plug to be the most versatile and useful option, but you could use an XLR, BNC, RCA/phono plug or whatever. Having decided on the connection format, the unwanted socket on the Groundology cable is cut off, the wire stripped, and you then solder it to the ground contact of the chosen connector (eg. the sleeve of a TRS jack plug).

To ground a ‘floating’ recording system, all you have to do is plug your Groundology extension cable into the appropriate grounding mains plug, and insert that into a wall socket (it makes no difference if the socket is switched on or not). The connector at the other end of the extension cable is then plugged into a spare socket on the interface or other equipment, providing a ‘hard ground’ connection to the equipment. This should prevent interference from getting in, foiling those unwanted noises, as well as preventing ‘touch clicks’ and ‘tingles’.

Just remember that the audio ground should only ever reach the mains ground at one point, so if you subsequently connect Class-I equipment, such as active speakers, to the system, disconnect the Groundology lead to avoid creating an unwanted ground loop.