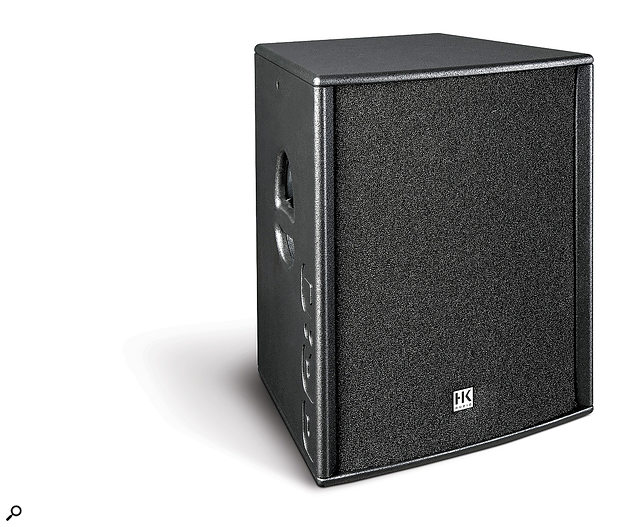 We took HK Audio’s new mid-priced active speakers to an outdoor festival to see if they could cut the mustard.

The annual West Fest festival in Malvern, UK, is a modest-sized annual event, set up on a large sports field and hosting two to three thousand people. We don’t set out to create punishing volume levels, but at the same time, we want to provide a clean and loud enough listening experience for those who want to hear the bands, so we normally use a system of around six kilowatts.

To that end, we were lent a pair of HK Audio’s new PR:O 15D full-range cabs for review, along with a pair of their existing PR:O 18 Sub A 18-inch subwoofers, so that we could test them at a real live event. The PR:O 15D is an update to the company’s earlier 15A model, which — while visually similar — had a different amplifier topology and used analogue circuitry rather than DSP for the internal electronics.

This year we set up two stages, allowing us to alternate the bands. A colleague used his own Turbosound rig for all the louder electric bands on the stage he was running, whereas my HK-powered stage handled a mix of acoustic and electric acts, some with drum kits, some without, and at the end of the day, a very loud dub band. Before I let you know how we got on, though, lets’s take a closer look at the HK Audio PR:O 15Ds.

The PR:O range comes at the more affordable end of the HK spectrum, but I’ve been using a pair of the older PR:O passive 12-inch cabs for many years now, and have always been impressed at their performance given their cost. While many companies now build their less costly lines in the Far East, HK use their own facility in Germany. Following the same general trapezoid wood box format as their predecessors, the PR:O 15Ds are bi-amped and use a 15-inch woofer augmented by a 90 x 55-degree ‘Constant Directivity’ horn fed from a one-inch compression driver. A perforated steel grille plus a thin layer of foam protects the drivers. Though obviously larger than the 12s, they are still very manageable, with an overall size of 470 x 625 x 430mm and a weight of 23.7kg.

Two side handles cut into the MDF casing, which has a durable black textured finish, make the speaker an easy two-handed lift, and there are three M8 threaded rigging points for more permanent installation. All the controls are on the recessed metal rear panel, with balanced signal in and through output connectors on XLRs. The input socket is a ‘combi’ type that can accept balanced/unbalanced quarter-inch jacks or XLRs, and a mic/line sensitivity switch means the speaker can be used in stand-alone mode with a single dynamic microphone when needed.

There’s a control for gain, and a recessed push-button to switch on the power; a green LED shows that the speaker is powered and operating normally. The LED switches to red if there is a fault condition or if the in-built protection limiter is being hit hard. A standard IEC connector is used for the mains inlet.

In this new model, power comes from Class-D amplifiers fed from a switch-mode power supply, an arrangement that has both pros and cons — though mainly pros. On the pro side, the amp pack is lightweight, electrically efficient and runs much cooler than a Class-A or A/B equivalent. On the down side, there’s no option to power a second passive cab off the same amp, as there was with the older analogue model.

As with many modern speakers, DSP is used to handle crossover duties, limiting and to provide flat or voiced EQ presets. A Tone knob provides a progressive adjustment between Music (slight mid scoop) and Speech (some LF roll-off) voicings, though we set this to the nominally flat centre position for the festival, and there’s also a switchable bass-boost option, which we again left set flat as we were using subs. The FIR (Finite Impulse Response) crossover operates at 2.5kHz and has a steep 48dB/octave slope. The overall frequency response is 60Hz — 16kHz (±3dB), where the -10dB points are at 54Hz and 18kHz.

Having a 15-inch driver means that the cab will work as a stand-alone, full-range speaker, and with a total amplifier power of 1200 Watts, there’s plenty of headroom. However, for large venues or outdoor events, having a couple of subs to look after the lows really allows these speakers to give of their best. The actual level available depends on where the speakers are set up and also on the dynamics of the music fed through them. Under typical conditions, though, you can expect an SPL of 125dB, with peaks in excess of 130dB comfortably catered for. 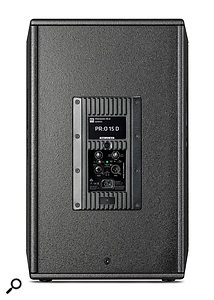 The jack/XLR ‘combi’ input has a mic/line sensitivity switch, allowing the speaker to be used on its own with a single dynamic microphone.

For pole mounting, the cabinets are fitted with HK’s familar DuoTilt 3/7 system, which gives them two pole sockets. One of these angles the speakers downwards at three degrees, the other at seven degrees. We selected the three-degree setting to give us the longest throw, and though a flat setting would seem to make more sense for outdoor use, we had no problem with projection.

The PR:O 18 Sub A is rated to a similar SPL, and extends the frequency response down to -3dB at 48Hz and -10dB at 38Hz. I set the crossover frequency to around 120Hz, which gave subjectively clean music playback during our pre-show system test using recorded material. I’m always a little wary with two-way 15-inch systems, as getting good mid-range coverage can be a big ask due to the challenges involved in getting both drivers to cover a large enough range to meet gracefully in the middle — which is where most of the key vocal frequencies reside. However, the PR:O 15Ds performed well in this respect: they are most definitely not just ‘tizz and boom’ boxes.

Our final system comprised two subs and the the two PR:O 15Ds as the main PA, augmented by an additional pair of older active PR:O 12As belonging to John Hewitt, who always shares the sound duties with me for this event. These were angled outwards at around 45 degrees just to widen our spread, as we were facing across the field rather than down its length. The two subs were set up next to each other on pallets at ground level to get most benefit from acoustic coupling, and other than having to turn the sub levels down slightly to get a natural balance, we got a good sound straight off with no need for overall EQ other than some subsonic low-cut plus high-pass filtering on all the vocal mics, courtesy of my Mackie DL1608 mixer (which, again, worked without a hitch). The weather decided to be kind to us, so after three weeks with some rain every day, we got away with just one very light and brief shower. That meant we could skip our usual buoyancy test! We did have one setback when a generator trip and reset killed all four of my monitors (two were just fuses, but the jury is still out on my Class-D floor monitors), but none of the HK speakers were affected.

The dual-stage arrangement was challenging, as it meant we could only do line tests during setup to avoid compromising what was being played on the other stage just 60 feet away. Between bands we allowed only five minutes to get a quick balance, then did any fine-tuning we needed during the first few bars of the first song. Though acoustic instruments can be revealing of less than ideal speakers, everything sounded natural and well-balanced, with plenty of clean level. And, as we had the subs helping out, drum kits, basses and the dub band were all handled with no fuss.

So it looks like the PR:O 15Ds are a sensible bet to use as a main PA for a pub and club band needing good clarity, and with the option to not use subs in smaller venues or where the PA isn’t being asked to carry a lot in the way of kick and bass. Where you need more lows, HK have a range of subs that pair nicely with the PR:O 15Ds. If you need more level from similar-sized boxes, HK can offer some pricier alternatives from their more esoteric series, but for realistic performance at sensible prices, the PR:O 15Ds tick a lot of the right boxes. They also come with a five-year warranty, which would probably add 30 percent to the price of a TV or fridge!

In the ‘15-inch wooden box’ stakes, the obvious competitor is Peavey’s HiSys H15, though there are many similar alternatives. However, most of them are built in the Far East, whereas HK Audio use their own factory in Germany.

A good choice for the band who have to fit their PA into a car but don’t want anything too ‘small-sounding’.

£619 per speaker including VAT.