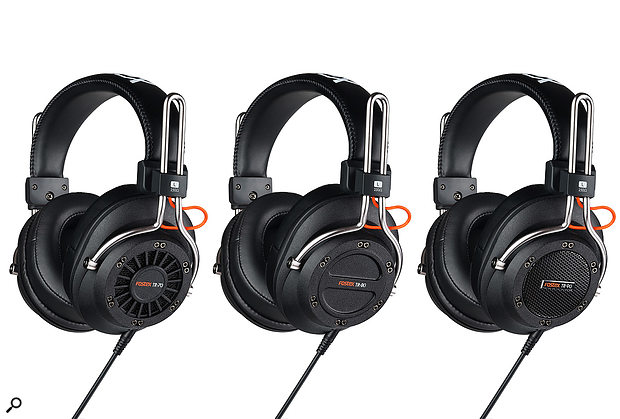 Fostex’s new headphone range offers closed, open and ‘semi-open’ options. But what’s the difference, and which would suit you best?

New headphone models from Fostex, it seems, come in threes. Back in January, I was impressed by their updated MkIII trio of planar magnetic designs: the open-backed T20RPs, closed-back T40RPs and ‘semi-open’ T50RPs share a remarkably consistent family sound, an affordable price bracket and a mid-range-focused tonality that makes them very usable for mixing. And, after an indecently short gestation period, the Japanese manufacturers have followed up with another set of triplets, this time using conventional moving-coil dynamic drivers.

Despite the use of a different driver technology, however, the three new babies share a lot of design features with their T-series siblings. Once again, it’s the openness or otherwise of the back of the earcups that distinguishes the three models: the TR80s are closed, the TR90s open, and the TR70s partially open. Each is available in 80Ω and 250Ω variants, but while the impedance is marked on the frame itself, the model name is printed only on the back of the earcup; since this is the only part that differs visually, and can be removed by undoing six pairs of Allen bolts, I strongly suspect that the three sets of phones are otherwise identical. I can’t think of any other headphone design that lets you access its innards so easily, and I wonder whether Fostex have done this as a nod to the ‘modding’ community.

The ‘phones are supplied with a soft carry bag and a choice of curly and straight cables, the former a bit too short for my tastes. These twist to lock into place in the base of the left earcup. Fostex’s familiar Cyberman-style metal hoops allow the earcups to slide up and down the headband; the earcups themselves pivot freely up and down, but unlike those of the TxxRP series, don’t rotate forward and back. The foam pads that press against the sides of the head are removable, and interestingly, two different pairs are supplied. The standard pads are about half an inch thick all the way around, while the ‘extra deep’ ones are slightly asymmetrical, extending to about an inch’s depth at the back so as to direct the sound into the ear at an angle. For some reason, the 80Ω versions of the TR-series phones are shipped with the standard earpads attached, while the 250Ω versions have the extra deep ones fitted as standard. Swapping them over takes just a couple of minutes. I generally preferred the deep pads from a sonic point of view, but found the standard ones a better fit on my head. Even so, the TR phones were not particularly comfortable for long periods of wear.

In headphone design there is usually a correlation between nominal impedance and sensitivity, such that the higher the impedance the phones present, the less sound output they produce for a given power input. That doesn’t seem to be the case with these ‘phones, where the specs list almost identical sensitivity figures for the 80Ω and 250Ω versions, ranging from 90dB for the 80Ω TR90s to 96dB for the 250Ω TR80s (ref 1mW at 1kHz). As a result, they offer only marginal gains in efficiency compared with the planar magnetic TxxRP range, and won’t go particularly loud from a laptop’s built-in headphone amp or other low-power source. (We were sent the 250Ω versions of all three, so I haven’t heard the 80Ω versions.)

Cut From The Same Cloth

One thing that’s notable about Fostex’s TxxRP planar magnetic phones is that the closed, open and semi-open versions all actually sound very similar — much more so than do closed and open ‘phones from any other manufacturers I can think of. Consequently, it was no surprise to discover that the same is true of these new TRxx models too. Even when I experimentally removed the back earcup covers from the closed-back TR80s, the change in the sound was really quite minimal. In fact, swapping between the deep and standard earpads seemed to make more of a difference than switching between the open-backed TR90s and the closed-back TR80s.

The family sound that is shared by the TRxx phones is quite distinctive. By far the best thing about it is the bass; the low end comes across as natural, articulate and deep, especially on the open-backed TR90s. At the other end of the spectrum, there’s a pretty strong emphasis on the upper-mid and high frequencies, which borders on the fatiguing and is certainly a fair way from being neutral. And in between, there seemed to me something of a hole in the 600Hz region. It’s a sound character that takes some getting used to, and though it could be considered ‘revealing’, I probably wouldn’t want to rely on any of these phones as my main reference for mixing.

Consistency within product lines is generally a good thing, but I’m not totally convinced of its advantages in this case. SOS usually recommends open-backed ‘phones for mixing precisely because they tend to sound different from closed-backed models! There are sound technical reasons why allowing sound to escape freely from the back of the earcups makes it easier to deliver uncoloured, high-fidelity sound to the ear, for users who are willing to pay the cost in terms of isolation. But if the open- and closed-back versions actually sound more or less the same, buyers of the former are paying the leakage penalty without getting much benefit, so I’m not sure what the point is. In fact, with the Fostex TRxx range, I’d go so far as to say that inasmuch as there is an audible difference between the open- and closed-back versions, I sometimes preferred the latter. The open-backed ones have the edge at low frequencies, with a more precise and authoritative bass sound; but they also suffer from an unappealing pinched quality in the mid-range that’s absent from the TR80s.

The market for studio headphones is a crowded one, and the new Fostex TR-series ‘phones occupy a particularly competitive sector of it. The closed-back TR80s are up against stiff competition from the likes of Audio-Technica, Beyer, AKG, Focal, Shure and Sennheiser; and although there are fewer open-backed rivals for the TR90s, they still face off against established best-sellers such as AKG’s K702s and Sennheiser’s HD598s. I don’t know of many rival ‘semi-open’ phones to compare with the TR70s, but nor am I convinced that this is a meaningful product category — if you don’t care about leakage, why wouldn’t you just buy open-backed ones?

Sonically, the main attraction of the TR90s is that well-judged bottom end, which might help them appeal to people making bass-led music; for more general mixing purposes, though, there are alternatives that offer better overall neutrality, not to mention comfort and sensitivity. The ‘scooped’ tonality of these phones is more typical of closed-back models in general, so for general-purpose studio duties, the TR80s are definitely worth considering. Their rugged build and modular construction should mean it’s possible to keep a pair of these going for many years even with heavy use. But I have to say that if I were given the choice of mixing on these or on Fostex’s planar magnetic phones, I’d go for the latter — and save myself a few bobbucks into the bargain.

This trio of moving-coil dynamic headphones do not sound as neutral as some rivals, and lack the distinctive appeal of Fostex’s own planar magnetic designs, but are solid performers nonetheless.