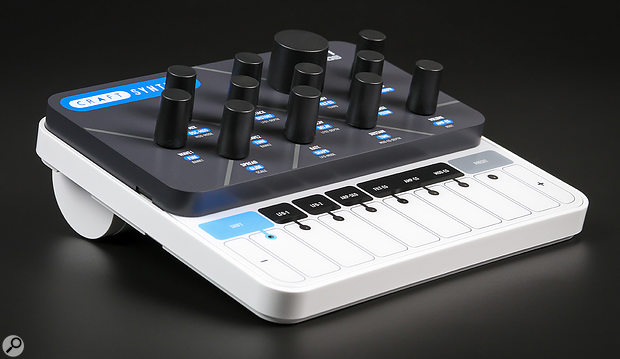 In the world of software, major updates to instruments are commonplace; less so in the hardware world. Yet here we are with a second generation of the Modal Electronics Craft Synth. The original was a budget-conscious, snap-together DIY effort, resulting in a zany-looking two oscillator digital monosynth. The Craft Synth 2.0 moves away from the DIY approach with a more robust build and a matured synthesis engine, yet keeps the price almost as low as the original.

And make no bones about it, the Craft Synth 2.0 is small. At 150 x 135 x 68 mm, it easily fits in one hand, yet manages to pack in a dozen encoders, a touch-sensitive keyboard and even proper MIDI DIN ports. A tubed section underneath holds three AA batteries and tilts the entire instrument forwards slightly, making it an ideal tabletop synth.

Basic operation is simple to grasp. Each of the dozen encoders has three functions it can control, with each function being labelled in a different colour underneath. On the left and right of the keyboard is a Shift and Preset key. Holding down one of these whilst adjusting an encoder will access its alternative functions. In this way, you have direct access to 36 different parameters using 12 encoders. The Preset key is also used in conjunction with the eight touch-sensitive 'keys' to store and recall up to 64 presets arranged in eight banks of eight.

The touch keys can be used to play the synth too, and are flanked with buttons to increase or decrease the octave. With only eight keys, Modal decided that the best approach was to have them permanently locked to a root note and scale. There are 29 scales to choose from, with one slot reserved for a user-programmable scale, which requires the MODALapp editor. However, without any kind of screen, it is impossible to tell which key or scale you are selecting. Coupled with the fact that the keys are not velocity sensitive, it's difficult to see how the keys could be used for anything other than simple triggers during sound design. Any serious playing will need to be done via MIDI.

Above the eight keys are dedicated buttons for various functions. Alongside Shift and Preset, there are buttons for selecting which LFO or envelope will be controlled by the shared encoders, as well as an on/off switch for the arpeggiator/sequencer. Along with these more obvious functions, there are a reasonable number of hidden key combinations which can only be learned by reading the manual. For example, holding Shift and Preset buttons for four seconds allows you to set the synth's MIDI receive channel. I'm not a big fan of esoteric key commands like this. It is rare that one can remember them all, but given the size of the Craft Synth 2.0 and its relative complexity, it is difficult to see how they can be avoided. Worse still, some functions are only available by using MODALapp, an application available for OS X, iOS, Windows and Android (see the 'MODALapp' box).

The design is striking enough. The diagonal lines on the front panel give it a certain '80s feel, while the rounded white plastic put me in mind of early iPod designs. I do question making the knobs almost the same colour as the panel. In a dark studio, it is difficult to see the knobs at all. Some of the labelling can be hard to read in low light also.

Round the back, we find MIDI In and Out ports and a micro-USB connector for power and MIDI. There is also line out, headphone socket, and sync in and out, all on mini-jack sockets. I was particularly pleased to see the full-sized MIDI sockets, as many instruments at this price resort to mini-jacks for MIDI in order to save a few pennies.

The big news on the Craft Synth 2.0's back panel is the full-size MIDI I/O ports. The accompanying sync I/O, line out and headphone ports are all on mini-jack sockets and there's a mini-USB port for power and computer connectivity.

On to the important stuff. The synthesis engine is comprised of two wavetable oscillators. There are nine wavetables available, each containing five waveforms, and both oscillators can use a different wavetable. The wavetables will morph smoothly from one waveform to another and you can automate this using a number of different modulation sources, after which you can add further interest by applying one of 16 different 'oscillator modifiers'.

Examples of oscillator modifiers are ring modulation, oscillator sync, downsampling, wave-shaping and frequency modulation (for a full list, see the 'Oscillator Modifiers' box). They each work using just one control, which can also be automated using the modulation matrix. Some use cross-modulation between the two oscillators, whilst others use a simple effect like bit-crushing on one or both oscillators. Clearly, Modal have done a fair amount of work in this area, but the one downfall is that there is no way to know which Oscillator Modifier you are applying unless you either memorise the 16 options (and their relative positions in the list) or use the MODALapp for sound designing. Unfortunately, this reliance on the app becomes a running theme throughout. Some users will be happy adjusting this by ear, but others may want to know exactly what they are listening to.

Up to eight additional oscillators can be added using the Spread function, which will achieve unison, stacked octaves and chords. This is done with a single physical encoder, which makes selecting specific chords or intervals quite difficult. Once again, unless you have excellent hearing and pitch detection, it's off to the MODALapp to pick something specific. Considering the Craft Synth 2.0 can generate eight oscillators, I do wonder why Modal did not include a simple paraphonic mode where you could play all available voices via MIDI. This would broaden its appeal to a great extent I think. To be fair, there is the possibility to polychain multiple Craft Synths together and have them operate as a polyphonic whole (see the 'Polychain' box), but it would still be neat to get something close without buying multiple synths.

The filter is a state variable 2-pole design which can morph through low-pass, band-pass and high-pass. It doesn't self-resonate. It's a decent digital filter and the ability to morph between filter responses means you have many tonal options. The morph parameter is a destination in the modulation matrix too, which can add a wonderful sense of movement to a patch when assigned to an envelope or LFO. Talking of envelopes, there is a dedicated filter ADSR envelope with amount control along with one for amplitude and one which can be freely assigned through the modulation matrix. All envelope stages, plus the amount, are also available as modulation destinations.

To add further movement to your sounds, there are two LFOs. Each has four waveforms; sine, sawtooth, square and sample & hold, and you can morph seamlessly through them using a single control. Both LFOs can either be free running or sync'ed to master tempo, but LFO2 can also work at a division of the current note's frequency. I think this is the first time I've come across this feature in a synth (I suspect it has lineage in Modal's bigger synths) and it's very cool. It can produce audio-rate, note-dependant effects and it can almost sound like an additional oscillator at times. There are options to have the LFOs retrigger, free run or run through a single cycle, effectively turning them into an extra envelope. 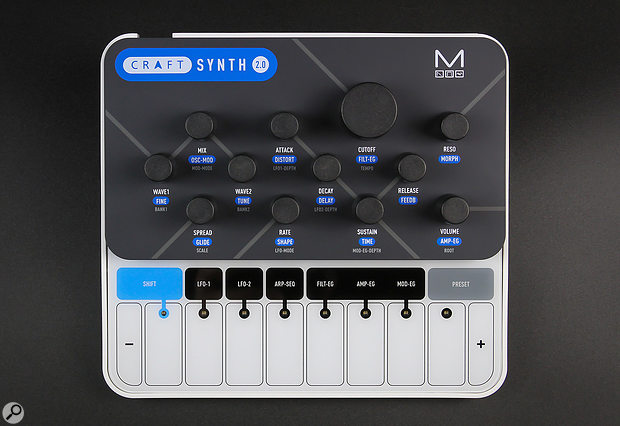 The Craft Synth 2.0's front panel measures just 150 x 135 mm, making it perfect for pockets, small desks and those little fold-out tables you get on the back of train seats.

To help you assign all this modulation, the Craft Synth 2.0 offers an eight-slot modulation matrix. Each slot can hold a single modulation source and destination. The list of modulation destinations is comprehensive. It includes obvious ones such as wavetable position, pitch, oscillator modifier, filter cutoff and resonance, etc. But it also includes other useful destinations such as all envelope stages, delay time and feedback, glide time, oscillator spread and filter morph, which allows for some very creative patching. The modulation sources are sadly more restricted. There are eight fixed sources: LFO1, LFO2, mod envelope, note pitch, velocity, mod wheel, expression (CC11) and aftertouch. Only the first four in that list are available to assign from the synth itself. Velocity, modulation wheel, expression and aftertouch can only be assigned from the MODALapp. This is probably my biggest gripe with the Craft Synth 2.0. If you want to use the synth as a stand-alone instrument (without a computer), you'll have to learn to deal without velocity, modulation wheel or aftertouch. I suspect this will be a deal breaker for some.