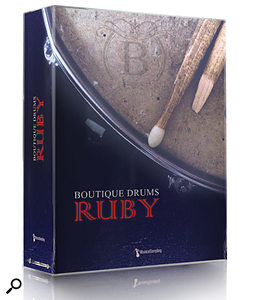 While top-end virtual drum instruments such as Superior Drummer 3 are both highly desirable and amazingly capable, for some users, they are beyond their budgets and quite possibly overkill in terms of features offered. Fortunately, for those looking to get something that's both lower cost and simpler, there are some interesting alternatives. One such option is the Boutique Drums series from Musical Sampling and there are two titles currently available; Ruby and Jolene. Both are modestly priced and offer a super-simple user experience. Both also require Kontakt 5.8.1 or later.

The two libraries share the same very streamlined user interface, but differ in terms of the drum sounds on offer. Ruby is perhaps aimed at conventional rock and heavy rock, while Jolene has a more vibey sound and would perhaps suit indie, pop and (yes, Jolene) country styles. In each case, the UI provides you with eight complete drum mix (the blurb uses the term 'baked-in') presets and, while you can mix-and-match individual kit pieces (kick, snare, hi-hat, etc) between the various presets and adjust their mix balance, that's pretty much it in terms of sound-shaping. This is a deliberate 'keep it simple, stupid' design decision by Musical Sampling; you pick a preset and go. 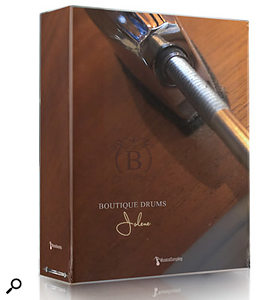 The sampling itself feels fairly detailed, though, and the drums themselves have a good dynamic response as well as round-robin sampling on the hi-hat, rides and toms. As well as each kit piece being mapped across a conventional range of MIDI notes, you also get three batches (each recorded at a different tempo) of eighth-note hi-hat patterns; hold a single key and these will play back tempo-matched to your host. The sampling here includes different degrees of hi-hat opening and a very neat option of using the Mod Wheel to crossfade between these in real time. You can switch these patterns between half and double time to create 1/4 or 1/16 grooves. You can also engage a Humanization setting which simulates varying degrees of timing adjustment to incoming MIDI data so programmed parts are not too mechanical.

That's about it in terms of features. In use, the sounds are very solid and very usable. As advertised, it doesn't take you long to pick a sound and get playing. I'm sure this will suit some users down to the ground. Personally, I would have liked an option for fine-tuning the degree of ambience although, in part, that's what the different mix presets offer. The simplified concept here is perhaps taking things in a similar direction to that offered by the Get Good Drums products and, if metal is more your thing, I suspect they might be a better bet. However, if you consider that even the GGD approach is OTT, then Boutique Drums Ruby and Jolene keep it even simpler while still offering some solid acoustic drum sounds.