Though his Musical Sampling company is in its infancy, founder Aaron Sapp is well established: as well as writing TV, library, game and trailer music since 2002, the Florida-based composer has created demos for some leading US sound companies, so we can assume this is a man who knows what to do with an orchestral sample. (I’m also heartened by his choice of company name, as unmusical sample libraries have been known to trigger clinical depression in SOS reviewers.) In this review we’ll take a listen to Musical Sampling’s most recent offering, Trailer Brass. 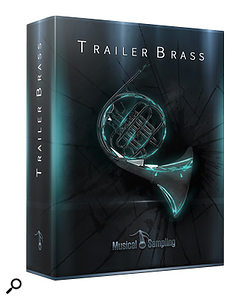 Trailer music is not known for its subtlety — in this line of work, the composer’s brief can be summarised as ‘hit me!’, and that’s precisely what Trailer Brass sets out to do. In fact, the sales pitch (“so loud, we broke a microphone”) should serve as an H&S warning: when the first patch I loaded sounded a little quiet, I rashly pushed the mod wheel all the way up and was practically blown out of my seat by the blasting triple-forte racket that emerged.

This compact 2.23GB library gets its big, ultra-dynamic sound from jumbo-sized sections of 10 French horns and 10 trombones recorded in a large concert hall from close and distant mic positions, with a third channel providing a preset mix of the two mikings. A formidable unison low-brass section of three tubas and three cimbassos (aka ‘The Horde’) adds a tremendous bottom end, but lacks the separate mic positions. The sound is superb straight out of the box: a wide stage seating arrangement creates a satisfying stereo image, and the lush, grandiose and supremely powerful tone of the instruments is enhanced by a fine hall reverb.

Simplicity is a major selling point: there are no long patch lists, nor any deep, complex features to tax the brain. Instead, we have instantly playable patches whose quick, positive attack works equally well for fast and slow passages, keyswitchable horns and trombones patches comprising sustains and staccatos, and velocity-controlled marcato attack options for all sections. ‘The Horde’ ensemble (which has been processed for extra oomph) performs hugely powerful short notes and sustains capable of causing structural damage at high volume. Though the focus is on maximum loudness, the patches incorporate a softer dynamic layer for pads and quiet ostinatos. In addition, there’s a menu of forcible effects, impacts and sound design patches derived from the raw samples.

On the downside, unprocessed versions of the low brass samples aren’t included, there are no trumpets (check out the company’s ‘Adventure Brass’ for those), and the no-frills articulation menu lacks interval legatos and any of the fancy stuff normally found in bigger brass collections. Nevertheless, Trailer Brass (which runs exclusively on Kontakt 5.5.1+ and requires the full retail version of Kontakt) hits its target brilliantly.