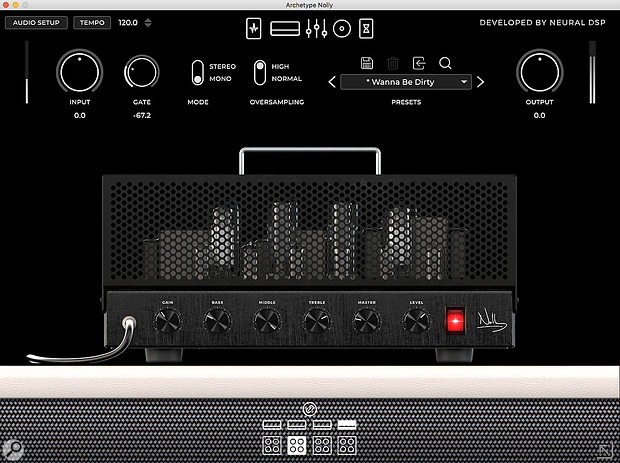 Neural DSP have bottled the guitar-recording wizardry of one of the hottest rock and metal producers around.

If you inhabit the world of modern rock, metal and prog, then Adam 'Nolly' Getgood may be a familiar name. Over recent years, he has built himself an impressive reputation as a songwriter, guitarist, bassist and, in particular, as a producer, through his work with his own band Periphery and other modern rock/progressive metal bands such as Haken, Architects and Animals As Leaders. He is also a complete technology obsessive and, seemingly, a thoroughly nice bloke!

Nolly is no stranger to music technology development. SOS have already reviewed the excellent Modern & Massive drum sample library (see SOS February 2019 issue) released under his own GetGoodDrums brand, but his latest endeavour sees him teaming up with developers Neural DSP to create a compact virtual guitar amp and effects setup.

In contrast to open-ended plug-ins like NI's Guitar Rig and Line 6's Helix Native, Archetype: Nolly features a fairly compact equipment list. It's based around four amps and four cabs taken directly from Nolly's own collection, plus a modest, but carefully chosen, set of preamplifier stompboxes comprising two overdrives, a compressor and a delay. A nine-band EQ sits between amp and cab, and there are also post-cabinet delay and reverb effects. A very flexible dual microphone configuration simulates mic choice and placement. Some of the original amps have been modded by Nolly, and the speaker/cab selections are based upon over 700 of his own impulse responses — this is a 'signature' plug-in with the artist's signature embedded deep within.

The actual amps modelled for the plug-in are not specified but the rumour mill would suggest that they are a Bognor Shiva, a modded Marshall, a Peavey 5150 and a Victory Kraken. It's a small collection but, in combination with the included cabs and the two distinctly different overdrives, the plug-in can easily cover the diverse array of pristine cleans, crunch and super-saturated (but controlled) distortion that is characteristic of modern rock bands. This is ably demonstrated by the excellent presets, which include some fabulous ambient clean tones that make good use of the post-cab delay and reverb; some even bypass the cab modelling for a super-articulate sound. Whatever level of crunch and overdrive you might like, you can get there, and the nine-band graphic is particularly effective, shaping the tone so that even at higher gain settings the sound can still be controlled and remains articulate.

Archetype: Nolly can run in both standard native plug-in formats and as a stand-alone application. The UI is clean and crisp, with five icons located top centre to navigate between the pre-effects, amp head, graphic EQ, cab/mic and post-effects control sets. Other core controls are laid out at the top of the screen including the input/output level knobs, the preset system, mono/stereo switch, the oversampling switch (which trades off quality against CPU load) and a noise gate. The latter is particularly useful at higher gain settings, but it is either on or off around the threshold; it might have been nice to have a little more control. The smaller amp head and cab icons at the very bottom of the display allow you to mix and match between the four amp and four cab models. 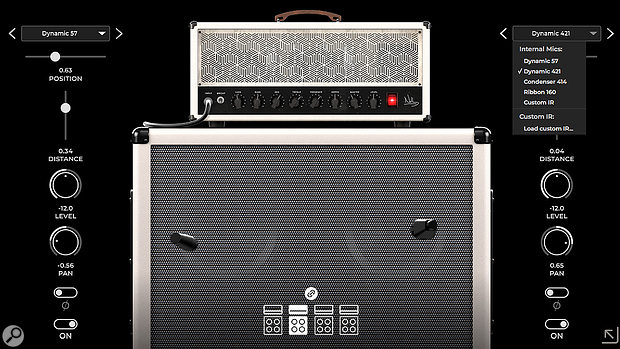 The built-in cabinet and microphone modelling is a highlight of the Nolly sound.

All the controls are very easy to use and, in the main, the visuals reflect the familiar real-world hardware. Aside from the four different cabs, you also get to choose between a one or two-mic setup, with four modelled mic choices. Mic position can be adjusted and level, pan and phase controls are also provided. The cab/mic modelling is exceptionally well done, but it's also possible to use third-party IRs for added variety. It's also worth noting that the software is MIDI controllable, both in its stand-alone incarnation and using your usual DAW MIDI automation features.

Some of the original amps have been modded by Nolly, and the speaker/cab selections are based upon over 700 of his own impulse responses — this is a 'signature' plug-in with the artist's signature embedded deeply within.

While some potential users might have wished for a few extra stompbox options, particularly in the modulation sphere, I doubt many people will complain about the sound. I've already commented on the diversity, but what really stands out is the quality of the modelling. I'm fortunate enough to have used most of the obvious software competition at some point, and have access to a Line 6 Helix as well as a couple of nice valve amps for my own studio guitar work. Sonically, Archetype: Nolly is up there with the very best.

I'll add a personal caveat that I think perhaps applies to every way of recording guitar parts. For Nolly to 'work', I think you need to let the guitar player monitor at a level that is capable of getting them excited, and where the guitar itself interacts with the air moved by the speakers. If you are lucky enough to have a recording space where some volume is possible, then I think Archetype: Nolly both sounds — and, importantly for the player, feels — very close indeed to a real amp. The various amp controls behave in a very realistic fashion, and the interaction between the preamp gain and power-amp volume controls feels very amp-like. Hats off to Neural DSP and Nolly: this is some of the best amp/cab modelling I've ever experienced.

Just as musician fans of Nolly have snapped up GetGoodDrums because of his prowess at getting great rock drum sounds, I suspect there will be a very receptive fanbase for Archetype: Nolly. There is more to getting a good rock or metal guitar tone than winding up the gain, and the presets include some examples straight from the Periphery locker. That said, while Archetype: Nolly can certainly cover a lot of sonic ground, it's genre-specific to an extent, so if you are looking for a more generic, all-in-one guitar rig modelling solution, there are perhaps more obvious choices.

I'm impressed by what Neural DSP and Nolly have created here. On the surface, it may appear to be a niche plug-in, but it's actually a surprisingly versatile virtual guitar rig built from a modest, but well chosen, selection of original components. Neural obviously have some clever boffins capable of capitalising on Nolly's own gear geekery, and if you are a fan of modern rock, metal and prog guitar tones, this is pretty much a no-brainer, especially given the relatively modest price.

Neural DSP and Adam 'Nolly' Getgood have created something really rather good that deserves to find an audience beyond the obvious rock and metal genres. Archetype: Nolly is surprisingly flexible and sounds fabulous.