The Nonlinear Labs C15 is that rarest of things — a synth that dares to be different.

Stephan Schmitt was the founder of Native Instruments and its Chief Technical Officer for many years until he realised that he had lost his passion for what NI was doing and moved on to establish Nonlinear Labs. The company's first keyboard, the C15, is a digital polysynth delivered in two sections that you connect using the supplied brackets and cable. The Base Unit contains its five-octave keyboard, a pitch-bender, two long ribbons that you can use as controllers and as data entry devices, a small control panel with an OLED display, plus volume controls for the main and headphone outputs. The Panel Unit contains four panels of 24 parameter selectors (96 buttons to access a rather larger number of parameters) plus a central editing section comprising a further 18 buttons, a rotary encoder and a larger OLED screen.

In a novel twist, it's possible to play the C15 without the Panel Unit attached, using the Base Unit as a preset synth that you can also program using its browser-based editor/librarian (see 'The Editor/Librarian' box later). But if you attempt to edit the C15 before doing any homework, you'll probably end up with little more than a selection of weird noises that will do nothing to enhance your reputation as a sound designer. This is because its 'Phase 22' phase modulation synthesis engine (which is related to, but a significant advance upon, the Kontour engine that Nonlinear Labs developed for NI) eschews common digital synthesis techniques such as PCM playback and virtual analogue modelling and instead incorporates elements of 2-op FM and its sibling Phase Distortion synthesis, while not being the same as either of them.

There are two initial sound generators for each of the C15's 20 voices. These are called Branch A and Branch B, and each comprises an Oscillator and a Shaper. The Oscillator generates a sine wave whose pitch is controlled by a tuning parameter, an Envelope and key tracking. The initial phase is also programmable, ranging from -180º to +180º. However, there are three ways — all controlled by Envelopes — in which you can modulate this wave to obtain complex spectra. The first is by feeding the output from the Oscillator back to modulate itself or by applying the output from its Shaper as the modulator, or a mix of both. The second is cross-modulation derived from the output of the Oscillator or the Shaper of the other Branch, or a mix of both. The third is the modulation generated by a feedback loop tapped from further down the signal path. If this wasn't complex enough, each oscillator offers a parameter called Fluctuation that applies a random frequency offset to each cycle of the oscillation, creating anything ranging from an unusual smearing of the sound at low values to wide-band noise at higher ones. The amount of Fluctuation can also be controlled by an Envelope, which makes all manner of strange effects possible. A low-pass filter called Chirp lies in the summed modulation path and removes some of the more aggressive consequences of high modulation amounts. 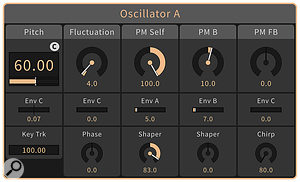 Each of the two oscillators generates just a sine wave, but there are many ways that this can be bent into fiendishly complex waveforms.Like the Oscillators, the Shapers generate sine waves that can be modified in various ways. Most obviously, you can overdrive a Shaper to create clipped waveforms with increasing numbers and amplitudes of harmonics, while Fold and Asymetry (that's not my spelling, I promise) further modify its output in interesting ways. There are then three output level controls within each Shaper panel, and these determine what the Branch sends to the next stage in the audio path. The first mixes the proportions of unshaped and shaped signals within the Branch, while the second (controlled by an Envelope) mixes the output from the first mixer with another tap of the feedback signal before passing the audio to the inputs of the Ring Modulators that lie in each of the Branches. The third control determines the mix between the input and output of the local Ring Modulator, and this is the signal that is passed down the audio path.

If there were nothing more to the C15, it would still be a powerful synthesizer, but Nonlinear Labs have added two filter sections to shape the audio yet further. The first is called Comb Filter, but offers three functions. Its first parameter determines the mix of Branch A and Branch B accepted at the input of the comb filter itself, while the next sets the initial pitch of the first notch in its spectrum. This is followed by a 2-pole all-pass filter that affects the...